Everything Can Be Explained, Sooner or Later

Believe that everything can be explained, sooner or later and the important part is to ask questions andkeep looking for their answers. As a child, I became interested in Physics and loved the way how answersto each problem generate sets of more interesting questions. I chose research as a career path because, inthis form of study, by thinking out of the box, designing and performing experiments, and seeking answersto interesting problems, no matter whether you fail or succeed, your learning curve can only steepen.

Don't use plagiarized sources. Get your custom essay on
“ Everything Can Be Explained, Sooner or Later ”
Get custom paper
NEW! smart matching with writer

Thiseverlasting phenomenon makes research all the more interesting. I seek inspiration from physicists such asCurie, De Broglie, Feynman and many others, who did their best work during their PhD. I see this academicdegree as that opportunity in my life in which I can grasp knowledge with a fresh perspective, and apply it,such that I can reach my full potential.The most exciting part of the research for me is implementing theoretical concepts in a practical set-ting.

Physics experiments have always fascinated me and the lack of apparatus and opportunity in mysecondary school made me more curious about experimental research.

Nonetheless, when I came to college,I learned a wide variety of laboratory techniques for experimental physics. I took advantage of the samewhile completing four courses of lab work on electronic circuits and microcontroller programming along withlabs on Laser Optics and Spectroscopy. I also made smart logarithmic and anti-logarithmic amplifiers inmy undergraduate project work where I checked their thermal and frequency stability and used them as abasic multiplier and divider circuit, which gave me the experience of applying my skills in electronics forpractical applications.

Apart from my curriculum work, I took part in a lot of technical activities like circuitdesigning and demonstrating physics phenomena to other students.

After securing all India rank 53 in the Joint Admission Test for M.Sc 2014 and being an Innovationin Science Pursuit for Inspired Research (INSPIRE) scholar I moved to the Indian Institute of TechnologyBombay to pursue my Master’s Degree in Physics. The curriculum at IIT Bombay lay at the intersectionof engineering and science and offered me a glimpse of fundamental science as well as emerging technologiesand novel engineering solutions. In my second/final year, I did a reading course project, studying Chern-Simons dynamics in 2 + 1 dimensions and its application on the Quantum Hall effect where I reviewed thecorrespondence of the Quantum Hall effect and the Chern-Simons Gauge theory based on Chern-SimonsLagrangian.

This project helped me in understanding the generic paths used in theoretical research.Soon after completing M.Sc, I joined Theoretical High Energy Physics Group at IIT Bombay as a visitingproject student. During the very short period of time, I learned about the key features of building the LittleHiggs models. Understanding the introduction of Nambu-Goldstone bosons and how to construct SU(3)Little Higgs Model to stabilize the radiative instability of Higgs mass originating from top quark, SU(2)gauge boson and Higgs itself were the goals of this project. Also, I studied the collective symmetry breakingwhich is the essential ingredient in Little Higgs theories and Little Higgs Phenomenology. This was my firsttaste of research work and I found it very exciting.

During this project, I realized how much I like facingmathematical obstacles coming in every hour which only add to problem-solving abilities.In Fall 2017, I joined the Medium Energy Physics group at Mississippi State University to pursue grad-uate studies in Experimental Nuclear Physics.

In the first semester, I learned about ROOT and completedseveral tutorials which gave me an idea about the data structure in typical Nuclear and Particle Physics ex-periments and to do a simple analysis. Later, I studied the geometries and functions of Torus Magnet, DriftChambers (DC), Cherenkov Counters (CC), Time-of-Fight Counters (TOF), and Forward ElectromagneticCalorimeter (EC), the components of CEBAF Large Acceptance Spectrometer (CLAS) in Jefferson Lab.Also, I learned about the event reconstruction process and how to identify charged particles after the eventreconstruction based on detector responses.In summer 2018, I started working with EG2 data which was collected from January to March 2004 withdeuterium and one of the solid targets (C, Al, Fe, Sn, and Pb) simultaneously and using 5 GeV electron beamenergy.

In the analysis, I developed an algorithm which identifies events with one scattered electron and atleast one?+and??which is required for Color Transparency Study in Exclusive?0meson production where?0is reconstructed from the two identified pions (?+??) using the invariant mass technique. I co-authored a1 paper which is recently submitted in Nature (2019) by the EG2 analysis group, finding the nucleon-nucleon(NN) interactions at very short distances corresponding to the relative momenta greater than 400 MeV/c.In the short distances, a transition from a spin-dependent tensor force to a spin-independent scalar forceis observed.

Also, I co-authored another paper which is accepted for publication in Phys. Rev. C (2019)(arXiv:1907.11974 [nucl-ex]) where exclusive electroproduction processep?e?p??0was measured in theresonance region at photon virtualities 0.4 GeV2?Q2?1 GeV2.I have contributed in the Drift Chambers (DC) calibration for the Run Group – A data, collected fromFall 2017 to Spring 2019 using the CLAS12 detector. CLAS12 is the upgraded form of the CLAS detectorand also the energy of the electron beam is upgraded from 6 GeV to 12 GeV. We achieved a trackingresolution of around 300 – 480?m. The results were presented in several CLAS collaboration meetings.

Also, I made a timeline monitoring suite forT0(initial drift time) andTmax(maximum drift time) whichare the most important fit parameters in drift time to drift distance conversion function. In the analysis,I reconstructed?0mesons associated with the events with a single scattered electron from both the RunGroup – A and GEant4 Monte-Carlo (GEMC) simulated data for a future CLAS12 Color Transparencyexperiment in Hall B at Jefferson Lab. The analysis was presented in front of the experimental readinessreview (ERR) committee. These projects at Jefferson Lab helped me in the transition that most youngresearchers encounter while jumping from the world of known knowledge to the world of research where notonly the answers but sometimes even the questions are unknown to all.Also, I would like to highlight that I represented Mississippi State and Jefferson Lab on the NuclearPhysics DC Day (March 11, 2019) at Capitol Hill.

The travel was supported by Jefferson Science Associates(JSA) Initiatives Fund. We met with the policymakers of both the House of Representatives and the Senatechambers and requested to support the “modest growth” in funding for the Department of Energy (DOE)Nuclear Physics program consistent with the 2015 DOE/National Science Foundation (NSF) Nuclear ScienceAdvisory Committee Long Range Plan. Working on such a large project not only taught me the researchskills but also how to communicate and collaborate across disciplines and language barriers.

I believe thisis a valuable skill required for collaborative research.Why a Ph.D.? I wish to take up research for the fun of exploring and understanding nature’s laws, forthe rich feeling I get out of learning from and working with brilliant people, for the opportunity it offersto develop myself as an individual, and for the satisfaction I derive out of producing something novel thatmight lead to new technological leaps for mankind. This career path also offers me an opportunity to teach,which I enjoyed while working as a teaching assistant for Physical Science Lab (PH 1011) at MississippiState University in Fall 2017 and Fall 2018. Teaching brings out a sense of satisfaction in me, as I enjoyhelping students, and guiding them towards a better understanding of the subject.

Also, this experiencehas helped me better understand how to explain concepts and convey my knowledge fluently in a class ofstudents from a myriad of linguistic backgrounds.I believe I possess the qualities to excel in this program. I am highly dedicated and motivated towardsresearch and using the output of the same for the betterment of the scientific community. I am diligent andpersistent in experimental work, and especially efficient in the computational aspect pertaining to research.I believe my foundation for pursuing this degree is solid, as I have completed several advanced courses.

Frommy research experiences so far, I am clear that I want to work in the experimental domain of high energyphysics. With exceptional professors working at the frontier of my field of interest and diverse peers to learnfrom, Tufts University is a great place to pursue my graduate studies.I am interested in Dr. Beauchemin’swork on making precise QCD measurements, searching for new physics beyond standard model, and ATLAStrigger system. The recent LHC run at 13 TeV energy scale would provide a huge asset of data to look forthe possible signature of new physics. I am also interested in the research of Dr. Gallagher, Dr. Mann,and Dr. Wongjirad on neutrino oscillation and interaction experiments using neutrino beams in Fermilab.With my strong background in theory as well as experimental techniques, I believe I will be able to activelycontribute to the ongoing research work at the university. I look forward to an offer of admission, and agreat learning experience at Tufts University

Everything Can Be Explained, Sooner or Later. (2019, Nov 14). Retrieved from http://studymoose.com/everything-can-be-explained-sooner-or-later-essay 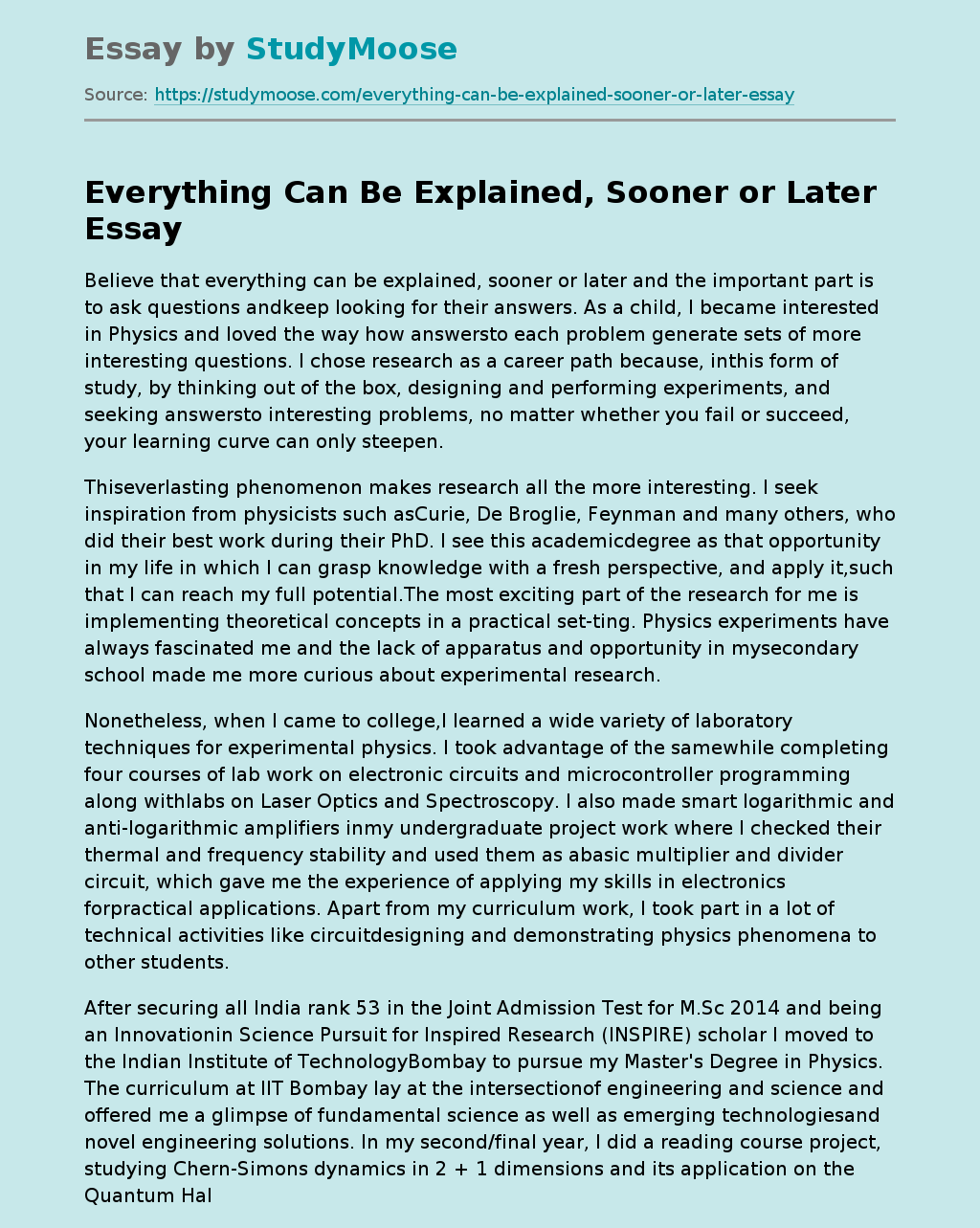