The Origin of Cells as Explained Through the Cell Theory

We know that everything on planet Earth is made up of cells; the Lithosphere, Hydrosphere, and Atmosphere (Damon et al., 2014). Many questions arise in regard to modern cells and their development. How did the first cells come about? How did simple non-compartmentalized Prokaryotes evolve into complex Eukaryotes? These questions can be answered by using theories such as the cell theory and the Endosymbiotic theory, as well as Louis Pasteur’s experiments (2014).

The cell theory consists of three principles; cells are the smallest units of life, all living organisms are composed of cells, and all cells come from pre-existing cells (2014).

Don't use plagiarized sources. Get your custom essay on
“ The Origin of Cells as Explained Through the Cell Theory ”
Get custom paper
NEW! smart matching with writer

After two-hundred years, this theory and its three principles has been created spanning from the earliest discovery of cells in 1665 by Robert Hooke, to 1855. When the Rudolf Virchow discovered the theory’s third principle. When Rudolph Virchow discovered the third postulate, that all cells come from preexisting cells. He primarily used the research of Robert Remak, who had found convincing evidence that New cells form by the division of preexisting ones (Underwood, 2014).

Using today’s technology, scientists are able to verify the principles of this statement through compound and electron microscopes. Scientists are also able to observe that cells go through Interphase, Mitosis, and Cytokinesis(2014). The first organisms to evolve on Earth were Prokaryotes (Damon et al., 2014). These organisms had an extremely simple structure without compartmentalization and almost no ultrastructures. Eukaryotes, on the other hand, tend to have a much more complex structure which includes compartmentalization and several unique ultrastructures (2014). The Endosymbiotic theory was hypothesized by Lynn Margulis in 1981, and it proposes a possible method by which the Prokaryotes may have evolved.

The theory states that about two billion years ago, a bacterial cell took up residence inside a Eukaryotic cell (2014). In this process, the Eukaryote provided the bacteria with a stable environment and carbon compounds, and in return, the bacteria became specialized in providing the Prokaryote with ATP (2014). There is a lot of evidence to support this theory, as scientists in recent years have been able to observe that mitochondria are extremely similar in size, structure, and have DNA which closely resembles that of a Prokaryotic cell (Damon et al., 2014). A similar occurrence found in today’s world is the relationship between Elysia chlorotica, which is a slug found in salt and tidal marshes, and green algae. During its juvenile stages, Elysia derives nutrients from its surrounding. As it develops, if E. chlorotica comes in contact with a specific type of green algae, it will ingest it and the chloroplasts from the algae will remain in its digestive tract (2014). This allows Elysia to have a more sedentary lifestyle, depending on sunlight to perform photosynthesis (2014) Spontaneous generation is a theoretical process by which living organisms develop from non-living matter (Damon et al., 2014). One obvious missing component of the cell theory is how cells first arose, there is no evidence that cells today are spontaneously generated, but the first cells must have arisen this way (2014). A French scientist in the 1900s by the name of Louis Pasteur conducted an experiment to prove that spontaneous generation did not exist anymore. He accomplished this by using a sterile nutrient broth placed into three different flasks, and open one, a sealed one, and one with distilled water. Over time, bacteria formed in the open flask, but not in the other two. This showed Pasteur that cells could not be spontaneously generated today, as the bacteria could only form within a flask which was open to air (Underwood, 2014).

The cell theory, the Endosymbiotic theory, and Pasteur’s experiments all work together to form plausible explanations for the origin of cells on this planet, And even though there may be many other theories and ideas about this topic, they are the most universally trusted and reliable ones. Understanding these theories and conclusions is essential if one wishes to fully comprehend the origin of all cells on planet Earth.

The Origin of Cells as Explained Through the Cell Theory. (2021, Apr 02). Retrieved from https://studymoose.com/the-origin-of-cells-as-explained-through-the-cell-theory-essay 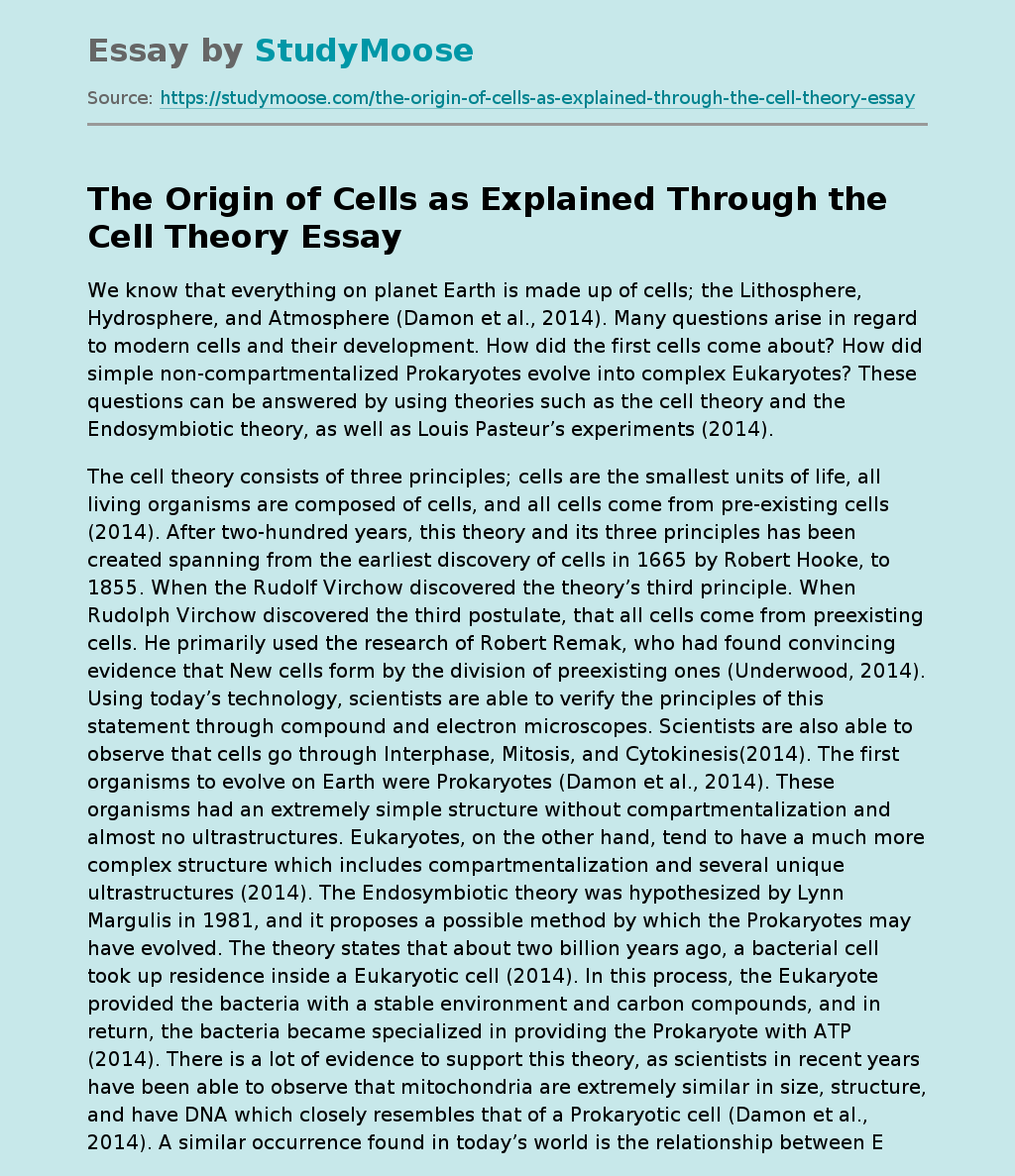