As China realised the need for modernisation, the one child policy was implemented in June 1979 to achieve three main goals:

1. To address the low per capita GNP by increasing the per capita income to $800.

2. To increase or improve the standard of living.

3. To keep China’s total population size from exceeding 1.2 billion by the year 2000.

China recognised the easiest way to achieve these goals was by restricting the population growth. That way, there would be a more likely increase in per capita income.

Turn in your highest-quality paper
Get a qualified writer to help you with
“ Evaluate the effectiveness of China’s one child policy ”
Get high-quality paper
NEW! AI matching with writer

Although several attempts have been previously made to control fertility growth, it was little as effective as it was optional and not many complied. However, China’s one child policy was a completely different matter. By accepting the policy, you were eligible for certain privileges and if you reject it, you’ll have to pay a fine. These regulations helped enforce the one couple, one child idea.

The one child policy proved to be a great success in urban China but ineffective in rural China.

Regardless of their educational attainment or residence, all women generally desired two children.

The one child policy worked best in urban China because of the strong organisation control and social transformations that changed the function of children and reduced the preference for sons. In an urban sample, in both Hebei and Shaanxi, the sex of the first child is insignificant. This lack of sex preference effect was the main ingredient for success of the one child policy.

However, this was not the case in rural China where villagers were in favour of traditional preferences for sons.

Although the implementation of the one child policy caused a decline in rural fertility rate from about five to 2.4 children by making farmers realise they needed high quality labourers and not a large number, most rejected the one child certificate. With the majority going on to have a second birth, 22% having a third birth and some having a fourth or fifth birth. These “hazards” in the one child policy were mainly caused by the first birth being a girl and living with parents in law.

But overall, China’s one child policy is an effective means of fertility control, despite the minor violation in rural areas. The failure of the one child policy in rural China may be a blessing in disguise. When the generation of parents of single children reach retirement age, the state will face more financial burdens than it does now. So perhaps the Chinese peasants have saved China from an economic disaster. The current per capita income in China is around $800, the living conditions have definitely improved as most Chinese now enjoy a high standard of living and China’s population by the year 2000 was recorded to be around 1.26 billion which slightly exceeded the set 1.2 billion mark. The one child policy was a success in that it achieved all its set goals.

Evaluate the effectiveness of China's one child policy. (2016, Jul 15). Retrieved from https://studymoose.com/evaluate-the-effectiveness-of-chinas-one-child-policy-essay 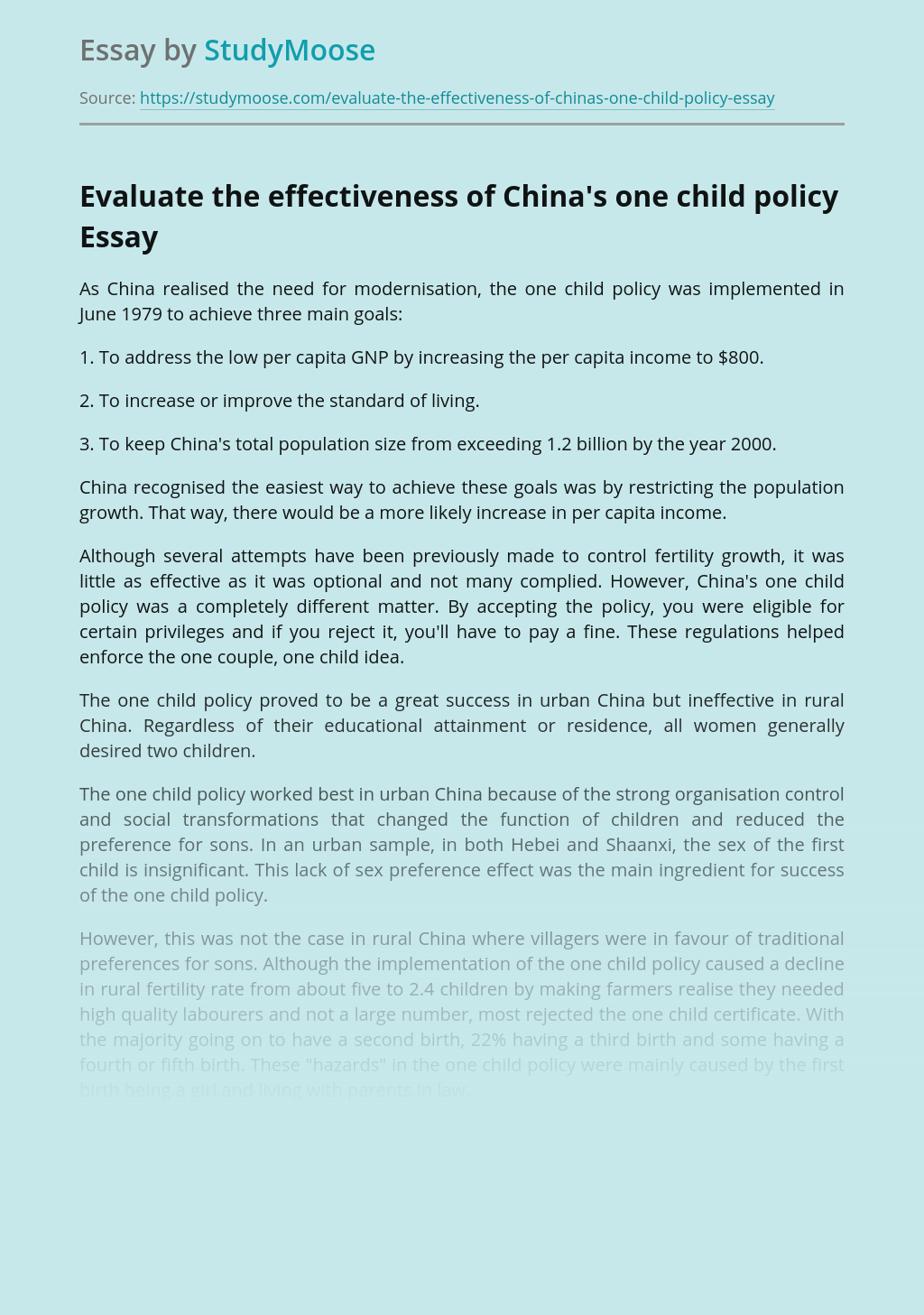 Turn in your highest-quality paper
Get a qualified writer to help you with
“ Evaluate the effectiveness of China’s one child policy ”
Get high-quality paper
Helping students since 2015
Stay Safe, Stay Original