Evalaute the Success of the Regeneration of London Docklands

The regeneration of the London Docklands, an area of approximately twenty square kilometres, over the past decade has not only provided a valuable base for London’s business to sit on but has put London on an ever increasing economic map. The use of a ‘ brown field’ site to situate this new venture has set a trend that has been adopted quickly throughout Britain. As the docklands were once the core of London’s economy, employing around ten thousand people, it seemed appropriate to replace it with a similar modern day equivalent.

Don't use plagiarized sources. Get your custom essay on
“ Evalaute the Success of the Regeneration of London Docklands ”
Get custom paper
NEW! smart matching with writer

The regeneration of the London Docklands has provided large amounts of office space, luxury housing and provided large amounts of services including an airport, highway and high speed boat service. The changes were funded by a i??440 million pound grant that was set up in 1981, under the name of the ‘ London Docklands Development Corporations’. This set up has achieved a great deal through its venture and has benefited from its work.

They sold the derelict land very quickly by clearing it and leaving it ready for developers to expand on.

They also achieved this as they offered very good packages on the land for new companies to set up on; no fees or rent for 10 years was a main factor in this attraction scheme. New companies saw this as a perfect stepping stone or base to build on, and this also gave the Docklands a new revived image with modern firms based there. Lack of planning permission and cheap construction made establishment very easy.

The LDDC benefited from selling this land, not only did it improve the image but it provided them with more money, as well as the grant to build around the new firms to complete the package of the revamped area.

As a result the Stolport was built, an inner city airport along with new roads and improved infrastructure. The airport now provides quick and easy access for business men to the Docklands where they can work in modern surroundings and leave again; this addition has made business very simple and effective. With new schemes established employment is provided. The Docklands said by 1991 the area would be employing around 33000 people. This target was met and yet the Docklands continues to develop today providing yet more jobs, Limehouse studios situated itself there in 1995 and Canary Wharf employees a further 50000 people.

When the Docklands was established and development began 8000 jobs were produced instantly, that’s nearly the same amount of employment the Docks produced in there original state, only after minor refurbishment had taken place. The Docklands is a modern day business specific area, it bases itself upon several forms of industry that also effect its employment pattern. Printing and publishing is a main form of employment in the area and hence nearly all of the countries national papers are situated here.

Finance and business is also big business around the re developed area particularly in Canary Wharf. These developments have a chain reaction effect. As a result the London University set up its base near the Dockland area. This choice has a number of good effects. The graduates leaving find themselves in an affluent area providing many high-class jobs, as a result of this it prevents younger people moving away and even attracts younger people to the area. This gives the area a younger better image and places the Docklands on a recognition map.

After the initial stages of set up the LDDC have become more social orientated with its actions (democratic). They construction of 1500 social houses and the agreement that quarter of the jobs produced would go to the local population was part of the change under the name of the Memorandum agreement. Re housing for locals was provided in the form of Tower Hamlets, along with 2000 jobs and i??2. 5 million spent on training the new staff. Large housing development schemes are also in the pipeline. A massive 30 000 new homes are planed with a further 2000 going along the affluent Royal Docks.

This area now primarily used for recreational purposes, this is achieved as it is not the water that has value but the land surrounding it. However the re development of the Docklands is not all sweet. There have been fundamental drawbacks and problems brought about by the change. Due to the nature of the project a new class of people have flooded the area. These people are affluent in the new highly paid jobs able to afford the new expensive houses. This change to the areas character has caused confrontation.

In the surrounding areas the stereo typical terrace housing remains along with the poorer community, they see these changes enviously and many of the jobs taken by new comers should have been theirs. This social difference is primarily caused by jobs provided. The original 10 000 jobs provided were less than halved between the locals and the newcomers with newcomers taking many of the locals jobs. This trend is due to the new tertiary industry in the area requiring different and new skills, while the locals are still based around the primary and secondary industries.

The introduction of the university will slowly change this trend but it will take time for its effect to show, locals argue this is un fair and that it will take to long to change. They have a case to argue though as in 1988 unemployment was at its highest in the area with 50 000 people out of work. This un employment factor also means that the new houses have become pointless to the local people as they are expensive and out of realistic reach, again allowing outsiders who can afford the homes and have the skills for the jobs to establish themselves in the area.

Only 2000 houses of the 30 000 will be occupied by locals. The accusation of un democratic decisions is another problem in the development scheme. The Dockland Community Council (DCC) feel that locals were not involved or communicated with in the venture and they were cast aside from the big picture. This is shown in the above examples and in the construction of multi million pound ventures that benefit no one but the company e. g. i??150 million invested in Limehouse studios. Locals argue this money could be invested in to projects that will benefit everyone.

Serious allegations have been brought against the LDDC by the DDC recently over the cutting of local council subsidies even though the LDDC received a i??440 million grant and then investing this money in large schemes, which are leaving locals, un employed and cut of. Local councils suggest this money should have been distributed fairly and that a better result would have been achieved. London Docklands re development has had a mixed effect. In terms of business and the positioning of an economic region in London, it has been a great success.

It has shown that wasteland can be turned in to a very affluent area providing jobs and homes. However the controversy produced counts against it greatly. Heavy investment has been the solution to the areas problems and this is somewhat reflected in the outcome; a synthetic area based purely around business and money making ventures. The areas success is a mixed bag to be viewed with an open mind and regarding the factors, it is likely that a simple answer will be never achieved.

Evalaute the Success of the Regeneration of London Docklands. (2020, Jun 02). Retrieved from https://studymoose.com/evalaute-success-regeneration-london-docklands-new-essay 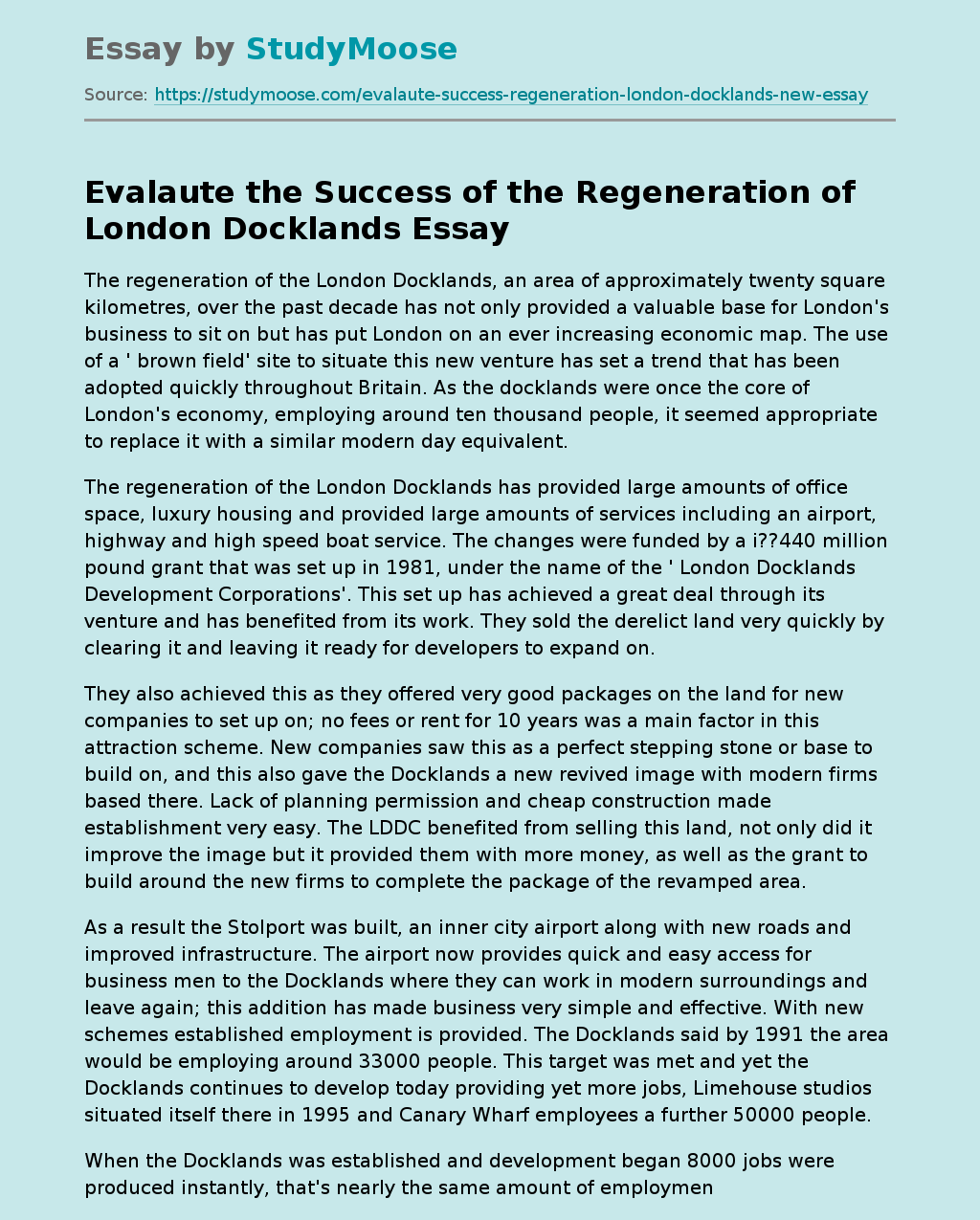