Ethics in Our Everyday Lives

“I consider ethics, as well as religion, as supplements to law in the government of man.”

Ethics in our Everyday Lives. As a society we are faced with ethical problems every day, and how we handle these situations shape our culture and lives.

Don't use plagiarized sources. Get your custom essay on
“ Ethics in Our Everyday Lives ”
Get custom paper
NEW! smart matching with writer

However, what are ethics? The meaning of “ethics” is hard to pin down, and the views many people have about them are shaky. People tend to associate ethics with their feelings. But being ethical is clearly not a matter of following one’s feelings, nor should one identify ethics with religion, the law or “whatever society accepts.” Ethics refers to the constant effort of studying our moral conduct, and our own moral beliefs, and striving to ensure that we, and the institutions we help to shape, live up to standards that are reasonable and concrete.

It is not enough to be able to do the right thing when we ourselves have nothing to lose. We must be willing to fulfill our ethical obligations at the expense of our self-centered desires and vested interests. (Dr. Richard Paul & Dr. Linda Elder, 2003)

In short, ethics is doing what is right even when no one is looking.

Well-founded standards of right and wrong that advocate what humans ought to do, usually in terms of rights, benefits to society, obligations, fairness, or specific virtues stem directly from having ethics. Ethical standards also impose the judicious obligations to refrain from rape, stealing, murder, assault, and fraud, therefore a society with a strong code of ethics tends to run smoothly. A society with no code of ethics could very well develop into anarchy. Although arguments have been made, to the contrary, ethics are just as vital in the workplace. Ethics are essential in the workplace because a tough ethical code provides a non-threatening environment with high employee morale, a company that exhibits clear-cut ethics tends to show higher profits, and simply because it is the right thing to do. Perhaps most important, attention to ethics in the workplaces helps ensure that when leaders and managers are struggling in times of crises and confusion, they retain a strong moral compass, and this goes for the workers as well.

The Ethics Resource Center, a non-profit, non-partisan organization devoted to business ethics, released the results of its 2005 National Business Ethics Survey, polling more than 3000 workers across America. The results were disheartening; 21% observed abusive or intimidating behavior toward employees. 19% observed lying to customers, employees, vendors or the public. 18% observed situations that placed employee interests over company interests. 16% observed violations of safety regulations and misreporting of time worked (Verschoor, 2000, pp. 19-20) Environments that accommodate these low ethical standards tend to feel hostile to the average employee. When this behavior is witnessed repeatedly over time, it lowers morale. And low moral easily leads the employee feels no loyalty towards the company and in turn the company feels no loyalty towards its employees. A workplace that encourages the effective ethical administration, however, is a workplace that breeds strong morale.

Patricia Harned, ERC president, states “Creating a strong ethical environment should be a top priority of all companies.” (Verschoor, 2000, pp. 19-20) According to “Workplace Ethics”, a company with strong ethical guidelines has a few commonalities. Companies watch encouraged communication; the staff feels open and unthreatened about reporting and discussing ethical concerns. They also clarify rewards and punishments, which provides a meaningful context to what otherwise seems arbitrary. Businesses that encourage trust between management and employs well tend to have a much easier time enforcing their ethical standards. Also businesses found out that by promoting this strategy that it was much less expensive and more effective than legally defining and enforcing their ethical standards. These organizations also build corporate values, which improves the corporate image. (Compilation, 1999) This creates an environment that employees find a joy to work in.

Furthermore, from a corporate perspective it is just as significant to note that an ethical company tends to be a profitable company. Can a company have ethical practices, and still show a profit? Yes, according to Business Ethics magazine. By concentrating on the effects of business decisions made and how they enhance or diminish the well being of others, benefits can be seen for the company, the employee, the stockholder, and the consumer. Many of the corporations that show up on the 100 Best Corporate Citizens by Business magazine also show up on Fortune magazine’s 100 Best Companies to Work For in America and Working Mother magazine’s Best Companies to Work For. (Do Good, Do Well, 2001, p. 28) Starbucks is one of these companies and has been a regular on these lists. Starbucks is working to empower farmers in East Timor, where coffee provides the livelihood of 25% of the population. The company also participates in various external programs to help benefit the environment and provide relief efforts after disasters.

Internally, Starbucks offers many benefits to its employees-including tuition reimbursement, partner benefits, a wellness program and a 25 to 150% match in its 401(k) plan. (Examining the benefits of corporate social responsibility, May1 2006) These factors are just some that contribute to the success of Starbucks and provide the company with the foundation to build a coffeehouse on every street corner. Another company that is perennially honored for its ethical conduct is Southwest Airlines. Although the airline industry has been through what some may characterize as catastrophic circumstances over the last several years Southwest has never cut employee pay. In fact, the organization’s employees took a voluntary pay cut after Sept. 11, 2001, rather than allow surging costs to force Southwest to reduce its flight schedule. “I’ve been here 28 years,” states Donna Conover, Southwest’s executive vice president of customer service, “and from the beginning, we’ve felt that employees are our greatest assets.” (Examining the benefits of corporate social responsibility, May1 2006)

An unethical company, however, can expect none of these benefits, and it may actually be part of the reason for failing. A perfect example of an unethical fallout would be that of the oil giant Enron. Former Enron chairman Kenneth Lay, discussing his company’s collapse due to fraud, and insider trading and tax evasion, recently insisted that his once great and honest company adhered to prevailing business practices. “The Enron task force investigation is largely a case about normal business activities typically engaged in on a daily basis by corporate officers of publicly held companies throughout the country,” Lay insisted in a December 2005 speech. Lay went on to say that the Enron task force was “attempting to criminalize” what he characterized as common business practices. Under Lay’s perverted ethics code, transactions meant to deceive are not wrong if these transactions, legal or not, are commonly practiced by corporate America. Stockholders often paid the price of such as moral relativism. (Zamansky, 02/01/2006, p. 11a)

This points out what should be the overriding reason for expecting high ethical standards in the workplace-it’s the right thing to do. A recent survey by The Society for Human Resource Management found that 54% of human-resource professionals surveyed had witnessed conduct in the workplace which violated either the law or common practices of their organizations. Some of the violations witnessed ware, Fair Labor Standards Act, violations of Title VII of the Civil Rights Act, employees engaging in fraud, falsifying records, altering the results of product tests, and misusing insider information. (Schumann, Spring/Summer 2001, p. 93) The survey found that 47% of those surveyed felt pressured to compromise ethical standards to achieve business objectives. They stated that they did not report observed conduct due to factors such as fear of retribution, lack of trust in the organization’s procedures, the desire to be part of the team, or a feeling that ethics were unimportant to the organizations. (Schumann, Spring/Summer 2001, p. 93)

The main culprit for this pervading ethical dilemma is moral relativism. Moral relativism is the belief that because different people have different moral principles, there is no way to pass judgment on these principles as to their validity or lack thereof. Taken to its extreme, this belief would allow any action, from lying to murder, if the perpetrator simply believes his moral framework does not preclude that action. An excellent example of this new moral relativism is recounted by Rhonda Gibbs. “About three years ago,” she recalls, “My daughter’s high school basketball coach, (also a teacher), was having a relationship with a minor.” The relationship, she details, was very obvious to those who had daily contact with the pair. Staff, faculty, and students watched the relationship develop over a period of nine months to a year; however, not a single person spoke up about the impropriety of this relationship or the seriousness of this crime.

Whether for reasons of not wanting to upset the coach, not wanting to look like a whistle blower, or simply to maintain the status quo, this teacher’s colleagues, the very people charged with protection of the young girl, allowed him to violate her for at least nine months. The school was only forced to deal with the issue when outside parties informed the police. Although the landscape sometimes looks bleak for the proponents of a strong ethical society, ethics do get used in a moral fashion, as this next example illustrates. Some surplus land adjacent to a shopping center was donated to a city by the developers who owned the mall. The land was earmarked by the builders to be used for community soccer fields. They then spent large sums of their own money to develop the fields.

The donated land was adjacent to a river, and after many years of spring floods swamping the fields, the city abandoned them. The developers, realizing that the land was no longer being used for their intended purpose, contacted the city. Developers are notorious for taking otherwise useless land and turning it into acres of parking lots. These individuals, however, decided to transform the property, at their own expense, into a community wetland park. This transformation took over two years and several hundred thousand dollars.

These businessmen, who were well within their rights to demand the land back since it wasn’t being utilized for its donated purpose, instead did the ethical thing at great cost to themselves. As I can be seen, ethics are important in the workplace and our every day life as well because they provide higher profits, higher morale, and ethical behavior is the proper course of action. Whether decisions made affect the operation of a home, small business, large corporation, or a nation, a clear ethical foundation will always serve to improve our society.

Examining the benefits of corporate social responsibility. (May1 2006). Employee Benefit News, pITEM0612100B. Retrieved May 5, 2006, from http://find.galegroup.com.

Ethics in Our Everyday Lives. (2016, Dec 03). Retrieved from https://studymoose.com/ethics-in-our-everyday-lives-essay 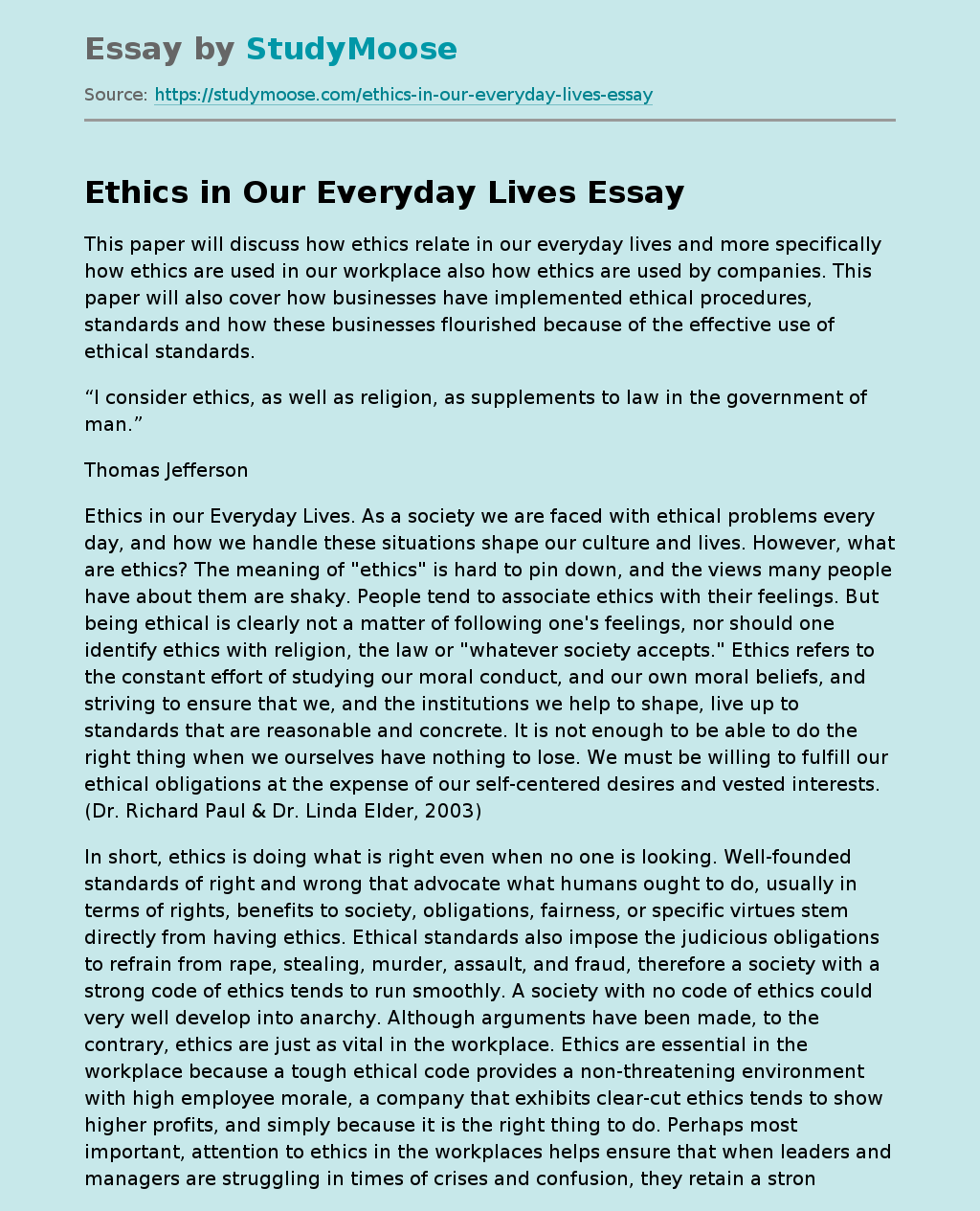