Essentially escapism provides a distinction between what is real

Essentially, escapism provides a distinction between what is real and what is virtual. The existence of two contrasting activities such as responsibilities like work and social life, and actions that escape like playing computer games and watching television is the basis of the concept of escapism (Warmelink, Harteveld, & Mayer, 2009). Warmelink et. al. (2009) listed motivations that drive an individual into resorting to escapism with the following: stress relieving, mundane breaking, pleasure seeking, and imagination conjuring. They further described escapist activities ranging from being evasive, passive, with active pursuits, to extreme.

Don't use plagiarized sources. Get your custom essay on
“ Essentially escapism provides a distinction between what is real ”
Get custom paper
NEW! smart matching with writer

According to Aquino and Miranda (2013), escapism may manifest as a mechanism of deception such as suppression or a mechanism of avoidance like fantasizing. Suppression is deliberately and consciously controlling one’s undesirable thoughts and impulses by forcing the mind not to think about certain inclinations (Aquino & Miranda, 2013).

On the other hand, using fantasy as a mental tool connotes that a person substitutes imaginary satisfaction for real satisfaction (Aquino & Miranda, 2013).

In the modern age, a candidate instrument for escapism is the presence of the continually advancing technology. Having accessible technological resources like the Internet have become a significant part of daily living. Koopman (2014) asserted that technology is embedded into a modern person’s immediate environment and daily routine reshaping aspects of life. Since its availability is prevalent, society can develop an “increase of emotional attachment to technology” (Koopman, 2014).

These vital issues of grief and escapism through technology are subject to discussion in the 2013 film by Spike Jonze titled Her. It is set in the near future in the city of Los Angeles where advanced technology is a relentless feature.

Consequently, Snyder (2015) affirmed that this filmic world has loneliness as a universal condition. The story revolves on Theodore Twombly played by Joaquin Phoenix. He goes through grief due to divorce. As a remedy to his loneliness, he utilizes functions and conveniences of the technology within his reach in an act of escapism.

The film portrays a romantic relationship between Theodore and a piece of software. Specifically, the technology being used is an operating system that named itself Samantha, voiced by Scarlet Johansson. With its programming, Theodore is able to engage in another reality rather than his own.

This relationship is made to appear genuine and meaningful but it only intensifies the lack of physical and mental connection among Theodore and the people around him (Koopman, 2014). Snyder (2015) stated that the fantasy world Theodore created with Samantha is an evasion and disappointment with the world; fantasy has a seductive nature that can rise out of a worldly disappointment which one is willing to allow in his life.

The film shares the same ideas as the song Deeper Understanding by Kate Bush (2011). It is about a man suffering loneliness due to people becoming colder. He finds comfort and pleasure spending time with his computer to the point where he neglects his bodily needs. Right after the song’s chorus where the computer sings of offering what he needs emotionally, the persona says, “I turn to my computer like a friend” (Bush, 2011).

Essentially escapism provides a distinction between what is real. (2019, Dec 12). Retrieved from https://studymoose.com/essentially-escapism-provides-a-distinction-between-what-is-real-example-essay 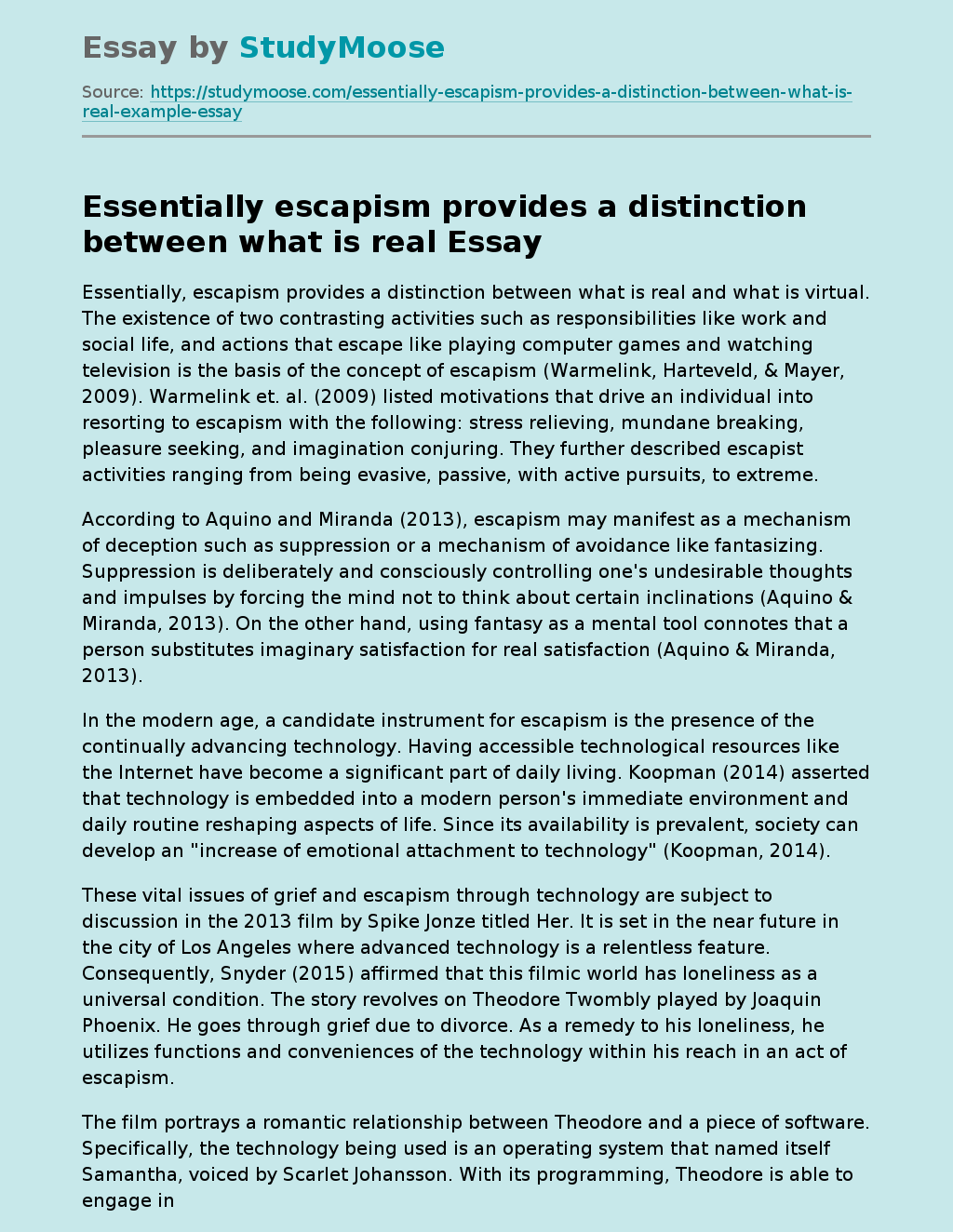