Saying farewell to a person, or even the thought of doing so is quite a shuddering idea to look into. This is quite hard when deep bonds are forged and lifelong friendships are made between many people. Imagine the thoughts of some of the students in the school when they learned that the twelfth graders are to soon depart from their beloved school and go on to make their lives. Even though this is in fact a normal passage of life in all schools, this is in fact the first batch of students to leave the school, so this is quite a new thought in everyone’s mind, but nonetheless, the fact that someone is leaving and perhaps could not be seen again is an eerie thought, and something you don’t want to have.

Don't use plagiarized sources. Get your custom essay on
“ The Farewell Party ”
Get custom paper
NEW! smart matching with writer

Students, not wanting to ponder upon the twelfth graders time of departure, but wishing to celebrate and enjoy every single second left with the departing, decided to give a farewell party, to give a grand exit with great hopes and lots of luck to those who will leave soon.

The farewell party was already planned by some very initiative and foreseeing minds a few months before even people realized the vastness of the idea, and planning was already in speedy progress. There were obstacles like every idea or problem does but that did not deter the very determined students of other grades, who wish to give a great surprise to all those in twelfth. There were plans upon a beautiful cake to start off the event at hand, followed by playing games and organizing activities for the “guests” to endeavor into, and also lots of conversations would be started filling up some time.

Then all the twelfth graders will be asked to give a small speech to make their peers from lower grades understand what they are up to face and what task could be done in which specific way, all which will stay as valuable advice. Soon plans for the location and time came up and everyone involved rushed off to dedicate themselves to their arduous but to be fruitful tasks. Even some teachers join in to give their beloved students a good impression of what they are setting forth to achieve in their live. After long and pained meetings, discussion and planning, the farewell party finally happened, and lots of people were there, friends and accomplices of those who are leaving. There was much activity in the room we were in.

There were colors of all types floating across the room hanging from any equipment on the walls or ceiling, to give a vibrant impression. The drooling smell of cake and other snacks drifted through the whole room, lifting many hearts and attracting them like moths to a light. There was loud chatter amongst the occupants, but that ended as soon as the program commenced.

There was a lot of reactions and emotions amongst the people there as one by one all the activities were done, after which the twelfth graders gave a speech, giving their thanks, and helpful advice, and also showing their deepest gratitude and kindness for all those there for thinking of something to lift their hearts as thy venture out into the world. After the party was over, there was a lot of chatter (and show of emotions) after realizing the enormous aspect of this thought.

The twelfth graders were constantly giving thanks to everyone and patiently answering everyone’s questions, but most of all, they were controlling their emotions for, they too were sad about leaving a place so close to their hearts. The people who are staying are showing what they already feel: signs of happiness and sadness mixed with each other, and thinking upon what could occur. All in all, something like farewell has really stirred up any deep emotions within all, and has caused tightening of bonds and friendships and also the exchange of contacts like foreign currencies. But aside from that thought, in the end, everyone left feeling satisfied happy and excited about their futures, living in the moment and achieving their goal of giving a great farewell to those who are leaving.

The Farewell Party. (2016, May 12). Retrieved from https://studymoose.com/essay-the-farewell-party-essay 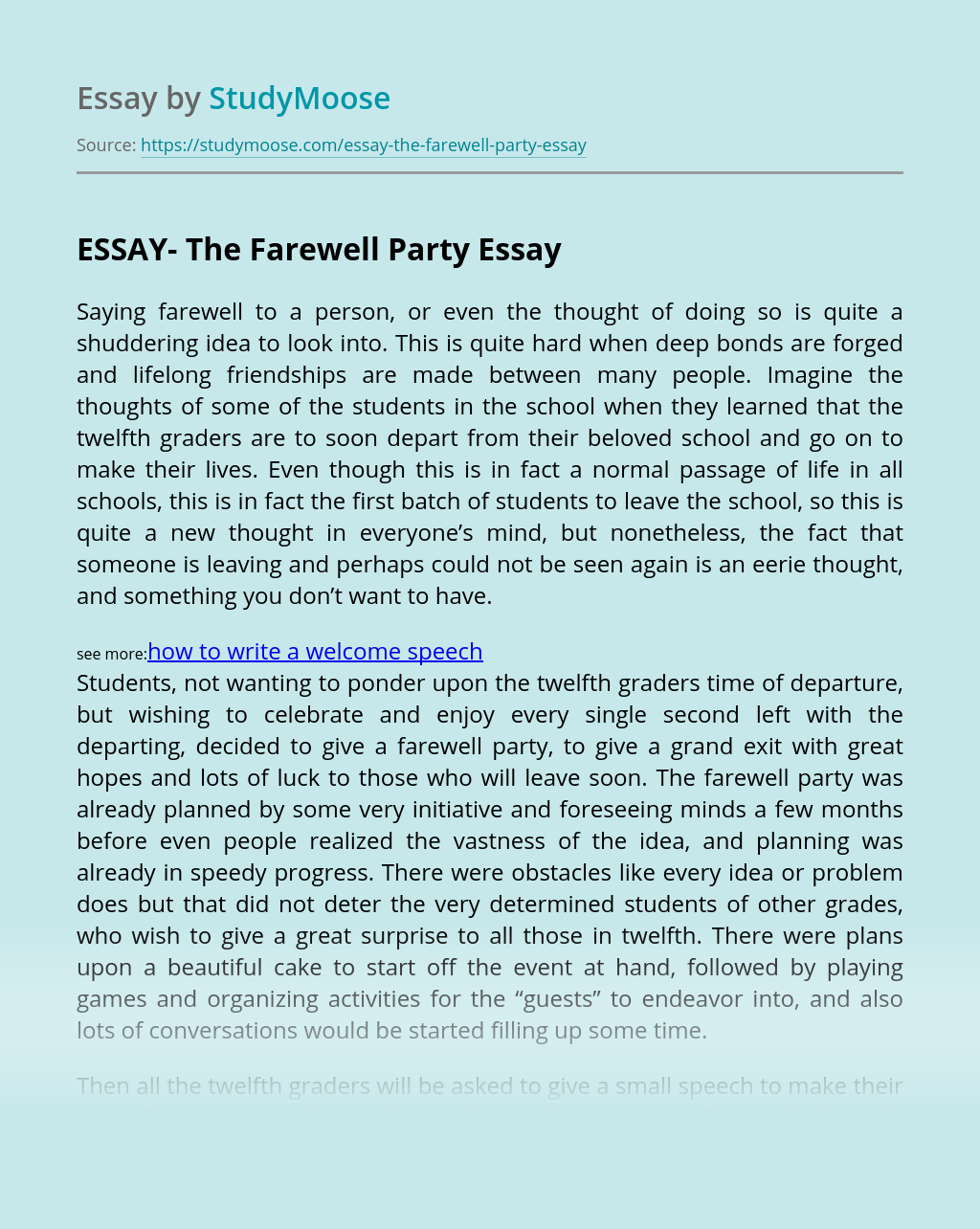