Alienation in Metamorphosis by Franz Kafka

Metamorphosis has many themes but Franz Kafka chose to specially to have a strong focus on alienation. Having experienced alienation from his own family especially his father, this is reflected on his writing. Even in sources, having been so isolated that he developed mental illness. Metamorphosis brings a light to these themes that can relate to anyone on a personal level.

Franz Kafka wrote Metamorphosis to express alienation that he experienced with the odd case of Gregor. Gregor is a salesman who wakes up one morning as a beetle and goes through the events up to his death.

Don't use plagiarized sources. Get your custom essay on
“ Alienation in Metamorphosis by Franz Kafka ”
Get custom paper
NEW! smart matching with writer

Gregor is alienated by his family even before he became a beetle, having to work all day to provide for his family. Admitting himself that there was a separation emotionally with his family. “Gregor…congratulated himself for his cautious habit, acquired from his travelling, of locking all doors at night even when he was at home.”(Pg. 6) This information is given to the reader for the sole purpose of showing that Gregor has already isolated himself from his family.

Locking the doors of his room, which he add that he does on his travels, even though he’s at home that gives an indication that he doesn’t have trust or a strong connection with his family to have his room unlocked. But Gregor isn’t the only one who shows a disconnection with his family, his father shows this throughout the story having been the one to physically hurt Gregor even after the fact that they know it’s Gregor.

“No plea of Gregor’s helped, no plea was even understood; however humbly he might turn his head, his father merely stamped his feet more forcefully..he drove Gregor on, as if there were no obstacle..his father gave him a hard shove, which was truly his salvation, and bleeding profusely, he flew far into his room.” Knowing the fact that Gregor is this insect, his father still shows this aggression, having no empathy at toward him. Any other person who knew it was their family member would have taken a softer approach on contrary to Gregor’s father who takes to hurting Gregor. Not only that but soon they are putting things into Gregor room, “Many things had become superfluous, and though they certainly weren’t salable, on the other hand they could not just be thrown out. All these things migrated into Gregor’s room. Likewise the ash can and the garbage can from the kitchen. Whatever was not being used at the moment was just flung into Gregor’s room by the cleaning woman.” Which just shows that even though he’s in this form, they don’t really do anything to make him feel comfortable. Instead they made it into a storage room where they dump all the things that they don’t want, sending the message toward Gregor that he isn’t a part of the household anymore. Exiled and making him isolated now from his home by his own family, no longer needed to provide for them. Frank Kafka provided this to drill in the point that Gregor is completely alienated from his family before and now that he needs them, having been just used to provide for them then discarded once he’s no longer able to.

Frank Kafka then drives the point in how Gregor is alienated by his own family, similarly to what Frank Kafka had gone through with his own family. He goes through the disconnection between mind and body of a person who experienced severe alienation for a part of their time. And alienation in its meaning is a lost of identity, a sense of being exploited or being isolated which could lead a person to feeling a disconnection with themselves. This can connect from being social to job related aspects of life which can be seen through Metamorphosis happen to Gregor in his own everyday life before his transformation and during. Gregor is shows the signs of being disconnected with himself from having lack of self worth that could be seen in this quote,”A picture of my existence…would show a useless wooden stake covered in snow…stuck loosely at a slant in the ground in a ploughed field on the edge of a vast open plain on a dark winter night.” He calls himself useless in this, giving off his own feelings that he won’t be missed or even found just like the stake he describes. Frank Kafka reveals how Gregor emotions that he has been feeling since having taken on his job that he hates and his family alienation into a physical representation of him turning into a gigantic cockroach. “But the empty high-ceilinged room in which he was forced to lie flat on the floor made him nervous, without his being able to tell why – since it was, after all, the room in which he had lived for the past five years – and turning half unconsciously and not without a slight feeling of shame, he scuttled under the couch.” Gregor no longer feels comfortable in the open, seeking to be in a dark place of the room which is under the couch and that is reflected on the point that Gregor is emotionally accepting this. And from his family already sending the message that he is not a part of the house since they have taken over his room, it reinforced the idea that he is not welcomed causing Gregor to seek out comfort in being by himself with the items in the room especially the couch where he can hide himself in the darkness that it proves. This is a symptom that comes from being disconnected from body and mind from the cause of having been alienated for so long. The person is no longer safe in their comfort zone and other symptoms shows that Gregor instead of finding a solution, accepts this by the fact he admits he enjoys it when he finds ways to entertain himself in his room. “He was especially fond of hanging from the ceiling; it was quite different from lying on the floor; he could breathe more freely; his body had a light swing to it; and up there, relaxed and almost happy.” Gregor instead of staying with his human aspects, he starts to completely forget about it and starts to venture to more of his cockroach body and mind. Accepting it and finding joy in doing this simple thing of hanging upside down which does make him feel better just like hiding under the couch since it was dark.

Showing the disconnection Gregor has with his mind and body now that he no longer has that burden to provide for his family, being just trapped in his old room which makes him fall deeper into his alienation. Franz Kafka wrote Gregor like this for the sole purpose that he felt like this in his own personal life, having used his literature to escape from his father who directed his anger toward him. Being alienated from his own family and even suffered tuberculosis which would be similarly compared to how Gregor felt when he transformed into the cockroach. Franz Kafka also had to support his family at a job which he did not enjoy, doing it to mostly for his sister Ottla and from this, he had clinical depression from the amount of stress, pain and how much he was pushed into alienation from his own family especially from his father who did not accept him. And Franz Kafka wrote Gregor this way since he himself went through all those emotions, showing how our daily life shapes our mental health, affecting it so much that we can’t live through it. This shows how much anyone can be affected from being alienated.

Alienation in Metamorphosis by Franz Kafka. (2019, Nov 22). Retrieved from https://studymoose.com/essay-958-example-essay 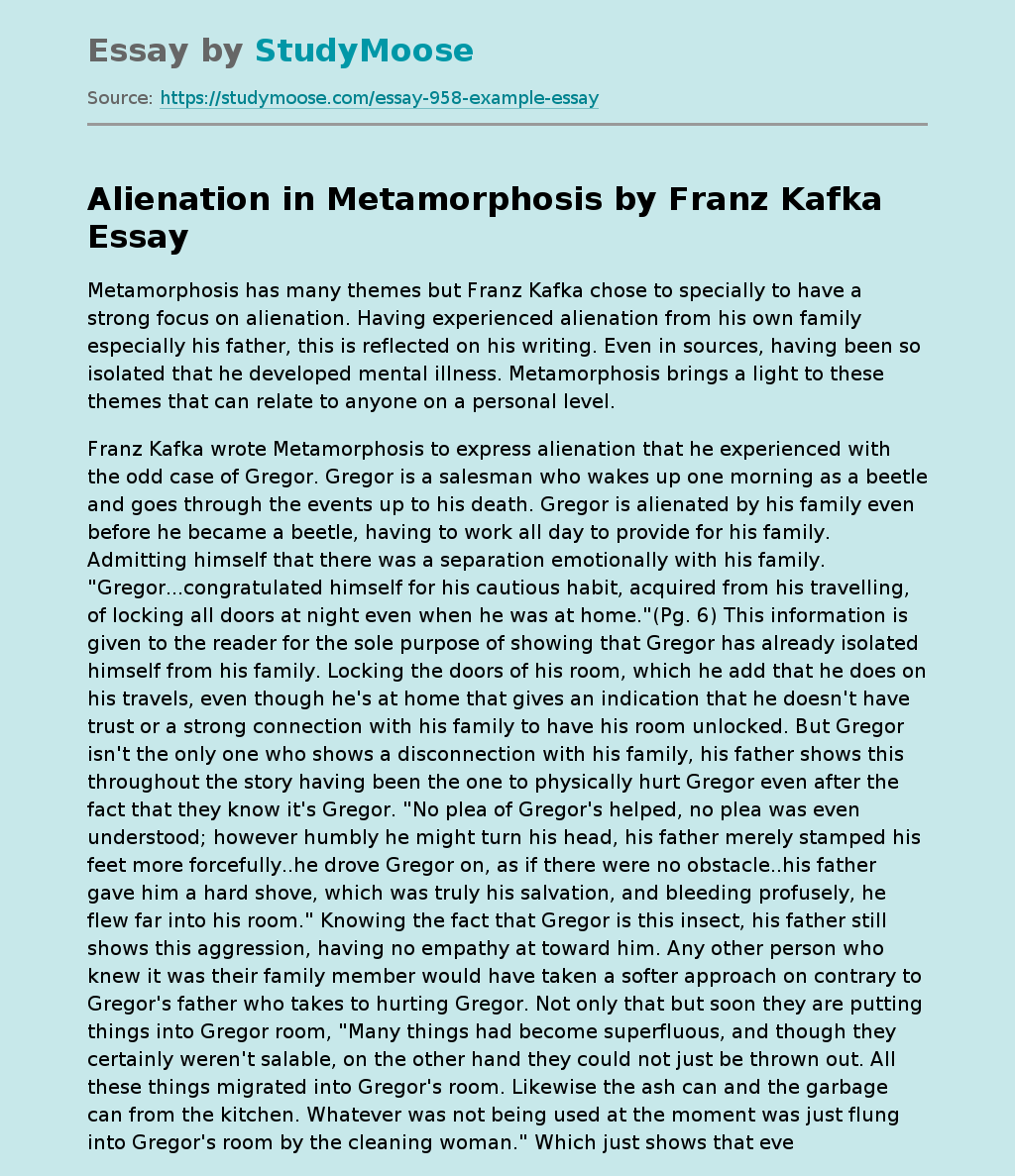