A sense of belonging or not belonging can emerge from the connections made with people, places, groups, communities and the larger world. How does this apply to “The China Coin”?

It will also examine how a character’s connection with the nation of China at large gives rise to their sense of belonging or not belonging. In the novel “The China Coin”, the author uses various language techniques to illustrate Leah and Joan’s sense of belonging or not belonging, which emerges from their connection with each other. The novel begins with Leah feeling disconnected with Joan even though they are the only two members of their family left.

This can be seen by the way Baillie uses metaphor to compare Joan to “an evil aunt, who flies a broom on full moon…”.

This conveys Leah’s sense of not belonging to the relationship. A sense of belonging unfolds later in the novel after Leah and Joan both go through much together, hence leaving them with a more intimate connection with each other. After hearing grandfather implying that he wants them to stay so that he can trick them into paying for a ‘Hong Kong house’, Joan and Leah’s strong connection is expressed by their ability to communicate without even using words.

Baillie uses polysyndeton to emphasize this in the sentence “And both mother and daughter stopped and grinned at each other”. As can be seen, both these examples clearly show that Leah and Joan’s sense of not belonging or belonging to each other has emerged from their connection with each other. Apart from that, Allan Baillie has also used language features in the novel to draw attention to the sense of belonging or not belonging that stem from connections with a place, specifically, Good Field Village in “The China Coin”.

When the main characters first arrive in Good Field village, Joan felt accepted immediately as she spoke Cantonese fluently and quickly formed a connection with Jade. As a result, a sense of belonging was generated in Joan. This is reinforced by the author’s use of simile to describe them as women who “had been neighbours for years”. Contrastingly, Leah, who was not as fluent in the language, could not converse with Jade and Joan. As a result, she did not feel a sense of belonging to Good Field village. This is portrayed by Baillie’s use of the third person narrative voice, which tells the audience “Leah felt suddenly alone”. All this suggests that the concept of belonging or not belonging develops from one’s connection with a place.

Lastly, language features used in the novel “The China Coin” has supported the fact that a sense of belonging or not belonging can emerge from connections with the larger world. This can be seen in the character of the young boy who puts up political posters at the restaurant where Joan and Leah are eating. He does not feel connected with the state as he does not agree with the current political situations and wants democracy instead. This generates a sense of not belonging in the character, which is further reinforced as he uses hyperbole to describe other protesters and himself as “Enemies of the State”. Similarly, Ke, who is disconnected with the principles of China’s political agendas, feels like he does not belong to China at large.

This is evidenced in the use of dialogue where Ke tells Leah about what he wants changed in the political system. He tells her that he wants “Democracy! No more guanxi! No more influence, no more back-door deals!”. From this, it can be inferred that one’s sense of not belonging can rise up from one’s relationship with the world at large. In conclusion, Leah and Joan’s connection with each other and with places such as Good Field Village give rise to their impression of belonging or not belonging. Similarly, a sense of not belonging can be seen to emerge from connections that other characters have with the larger nation of China. 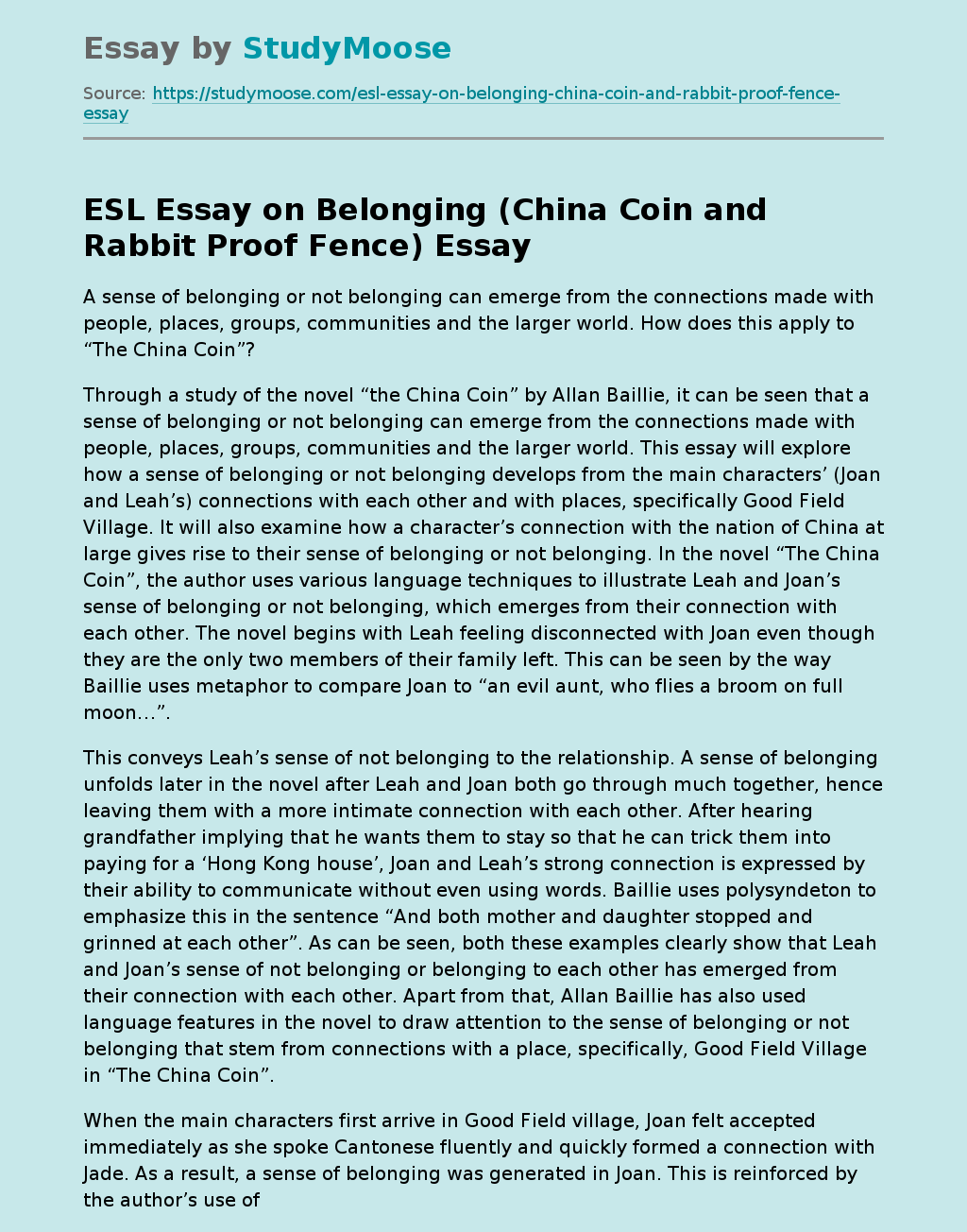