Ernest Rutherford was one of the most famous physicists of the early 20th century. He won the Nobel Prize in chemistry in 1908 for his work on atomic emissions and his contributions that led to the discovery of atomic fission. Ernest Rutherford was born in Nelson, New Zealand on August 30, 1871. His father was James Rutherford and his Mother was Martha Thompson. His father was a wheelwright, a person who builds and repairs wheels. His mother was a proper English schoolteacher. His whole families, including grandfather, were emigres’ to New Zealand in 1842.

Don't use plagiarized sources. Get your custom essay on
“ Ernest Rutherford, Physicist ”
Get custom paper
NEW! smart matching with writer

Ernest was the fourth child and the second son in a large family of seven sons and five daughters. Early education for Ernest Rutherford consisted of long hours in Government schools. Ernest was a good student who worked hard. His parents instilled in him a great work ethic and taught him to value education. His parents recognized that Ernest was very intelligent and encouraged him in his studies. While Ernest was gifted in Mathematics and Science, his mother encouraged him to seek balance in his studies and promoted study in the Arts, Literature, and History.

Ernest received a well-rounded education early in his childhood. Not only was he gifted in the Sciences, but expressed a great interest in all academics. He loved Poetry and Music as well as Science and Math. In 1888, Ernest entered the Nelson Collegiate School, at the age of 16. One year later, in 1889, he was offered a University scholarship having completed a two year program in just one year.

He entered the University of New Zealand on another full scholarship. Here he entered Canterbury College. He graduated with an M. A. n 1893 with a double major in Mathematics and Physical Science. He continued with research work at Canterbury College and received, one year another B. Sc. Degree in Physics. In that same year, 1894, he was awarded an 1851 Exhibition Science Scholarship, which enabled him to go to Trinity College, Cambridge, as a research student. He was fortunate to work under J. J. Thompson, another Nobel Prize winning physicist. J. J. Thompson won in 1906 for discovering the electron. Ernest Rutherford was awarded his B. A. Research Degree and the Coutts-Trotter Studentship of Trinity College in 1897.

When the opportunity came up in 1898, he took the Macdonald Chair of Physics at McGill University, Montreal, moving to Canada. In 1907 he returned to England to become Langworthy Professor of Physics at the University of Manchester, succeeding Sir Arthur Schuster. In 1919 he accepted an invitation to succeed Sir Joseph Thompson as Cavendish Professor of Physics at Cambridge. He became Chairman of the Advisory Council, H. M. Government, Department of Scientific and Industrial Research; Professor of Natural Philosophy, Royal Institution.

London; and Director of the Royal Society Mond Laboratory, Cambridge. Ernest Rutherford held many of the most prestigious positions in Physics in the world. His academic resume was astonishing and his intellect was renowned. He was a respected and applauded teacher and researcher. When Rutherford was in New Zealand he was concerned about the magnetic properties of iron. He wrote a thesis, Magnetization of Iron by High-Frequency Discharges. He also designed complex equipment to study electromagnetic waves. He worked with Professor Thompson when he arrived at Cambridge.

He also worked on the behavior of ions he observed in gases which had been treated with x-rays and in 1897, on the movement of ions in relation to the strength of a magnetic field. As early as 1898, he reported the existence of alpha and beta rays in uranium radiation and measured some of their properties. In Montreal, in late 1898, there were opportunities for Rutherford to work on radioactivity. He was very interested in the emission of alpha rays. With an associate, R. B. Owens, professor of Electrical Engineering, he studied the emanation of thorium and discovered a new noble gas, an isotope of radon, which later became known as thoron.

As early as 1900 he started work on radioactive phenomenon. “Disintegrating theory” paved the way to research work in atomic fission, which was discovered at the Montreal Laboratory between 1906-1906 by several of Rutherford’s associates. At Manchester Rutherford continued his research on the emanation of alpha rays, and with H. Geiger, devised a method and apparatus to detect a single alpha particle. He counted the particles from radium and helped to invent the Geiger counter in 1910. He investigated alpha rays and worked to determine the inner structure of the atom.

His theory of an atomic nucleus was his greatest contribution to physics. His theory stated that practically the whole mass of the atom was in the nucleus and was positively charged at a single, minute pint. In 1912 Niels Bohr joined his research at Manchester and he adapted Rutherford’s model of a nuclear structure to Max Planck’s quantum theory. You see, Rutherford was a catalyst who supplied a missing piece for other physicists who were working on the theories of sub-atomic structures. Rutherford has an “ah-ha” moment – and it came at the right time.

Their collective theory of atomic structure is still used today, with some minor adjustments. In 1913, together with H. G. Moseley, Rutherford used a cathode ray tube to bombard atoms of various elements to show that the inner structures correspond with groups of spectral lines in the wavelength of light for each element. Those characteristics were spectral lines, and each element had an identifying signature. Most importantly, each element could be assigned an atomic number, and the characteristics could be assigned each element based on the atomic number.

In 1919 Rutherford discovered that the nuclei of certain light elements, such as nitrogen, could be “disintegrated” by the impact of energized alpha particles coming from a radioactive source. He also discovered that protons were emitted during this destructive process. Rutherford smashed the nucleus and thus released fast moving protons. Blackett later proved, with experiments in a cloud chamber, that nitrogen was actually transformed into an oxygen isotope. Rutherford was the first physicist that deliberately transformed one element into another.

He was like the medieval alchemist who turned lead into gold! Rutherford was an inspiring leader in the world of physics who encouraged and directed many future Nobel Prize winners. Some of his students, associates and protege were Chadwick, Cockcroft and Walton, G. P. Thomson, Appleton, Powell and Aston. This is an impressive body of Nobel laureates who worked directly with this early Nobel Prize genius. Rutherford was knighted in 1914, appointed to the Order of merit in 1925, and in 1931 was created First Baron Rutherford of Nelson, New Zealand, and Cambridge.

Rutherford married Mary Newton, in 1900. His only child, Eileen, married the physicist R. H. Fowler. Rutherford died in Cambridge on October 19, 1937. His ashes were buried in the nave of Westminster Abbey, next to Sir Isaac Newton, and by that of Lord Kelvin. 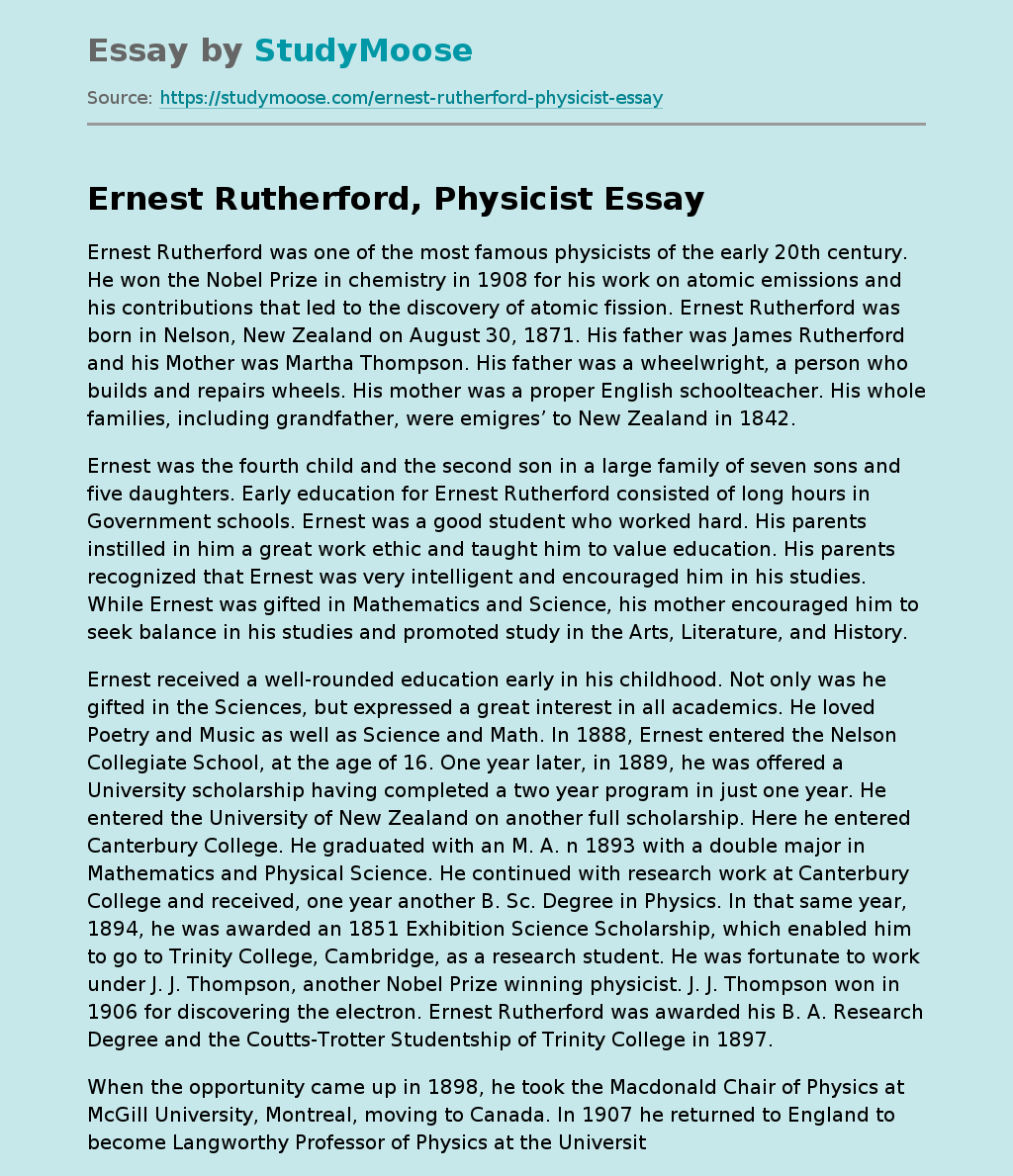