People have different views in life. Some would opt to wallow with the beauty of words and the power of the imagination, while others would opt for movies and witness the wonders of visual effects. Some of the stories made turn out to be inspirations for many, while others become a driving force for people to go on and continue with life. One of the most interesting stories in Literature is Eragon. Due to the story and the lessons that both children and adults would learn, the novel was adapted as a movie into the big screen.

Don't use plagiarized sources. Get your custom essay on
“ Eragon The Movie vs. Eragon The Novel ”
Get custom paper
NEW! smart matching with writer

However, I believe that the novel version of Eragon is still better than the movie version.

THE STORY The story revolves around a young boy, named Eragon, who grew up in a small farm in Carvahall together with his uncle and cousin. During one of his hunting trips in the mountains, he found a big blue stone. The stone attracted him greatly, and Eragon thought that if sold in the city, the stone would be enough to suffice for their winter needs.

Unknown to Eragon, the blue stone was actually a dragon egg, ready to hatch. Since care for dragons was prohibited by the king, Eragon had no choice but to secretly raise the poor animal, naming her Saphira.

Eventually, they were haunted down by the king’s men and had no choice but to flee the village. Eragon’s uncle, Garrow, died due to his injuries, making him furious and hungry for revenge.

Eragon’s journey towards survival with Saphira led to more secrets. In the course of their adventures, Brom proposed that he would do whatever it takes to help Eragon. The symbol in Eragon’s hand shows that he is indeed one of the dragon riders, like how Brom used to be. Towards the course of the journey, he was transformed from an ordinary teenager to a sword-fighting rider knowledgeable in magic and the ways of Dragon Riders.

Eragon meets more people and encounters more life-threatening situations towards the course of the journey, which allows him to learn more about himself. His quest for revenge allowed him to learn more about himself, and how his search for answers would lead him to protect a whole Empire. SIMILARITIES AND DIFFERENCES Books always have their own identity as compared to the film adaptations. This may be attributed to the fact that readers are given the opportunity to view the novel in their own way, and see things according to what their imagination has to offer.

The book and film version of Eragon had the same dilemma. Both media had the opportunity to share with people the wonders that Eragon’s life had to offer, and at the same time bring them to a world unknown to many. However, the 2 media used also had their own differences. The film version was intricately made in such a way that the viewers would become curious of what the story has to offer. The special effects used in the film version would definitely come as an impressive work of art. The descriptions set in the book, such as Saphira’s appearance were perfectly executed in the film.

One who has read the book with agree with me, especially in the details set for the other locations in the film. The language used in both versions were also similar with each other. The book on the other hand, made us of too many words. Some of the dialogues and scenes were cut in the film version, somehow giving the viewers a different impression of how the story would go. Take for example Eragon’s journey. Some of the places were deleted, and even Eragon’s reactions towards Katrina were deleted in the film version. In this manner, the plot of the story was somewhat changed deviating from the original context of the novel.

PERSONAL ANALYSIS The film version of Eragon was something to be considered. Those who have read the novel would have different impressions about the adaptation, especially when some of the important scenes and dialogues have been deleted. Although the aim of the producers was to fit the whole book in one film, this should have been done using a different approach. In the same manner, I also admire how the visual effects were executed. Saphira was one of the wonders of the whole story, and this was very well presented in the film adaptation.

Arya herself was a wonder to marvel at. As the book would have it, she was a beautiful elf, and was supposed to look mysterious at some point in the story. This was done perfectly, and I believe the actress who played her should also be given credit. Unfortunately, the film and the book had so many differences. The film version would look as if it was another story formed from the original novel, and not an adaptation. Although both had considered to keep the plot as the center of the film, the choice of words made the story difficult to absorb.

Both readers and viewers would have difficulty in trying to keep in tune with the story because of the many names and places it included. For someone who has seen both media, disappointment would not come as a surprise. However, for those who have not read the book, the film adaptation is impressive, especially with how Saphira was manipulated.

Eragon The Movie vs. Eragon The Novel. (2017, Jan 12). Retrieved from http://studymoose.com/eragon-the-movie-vs-eragon-the-novel-essay 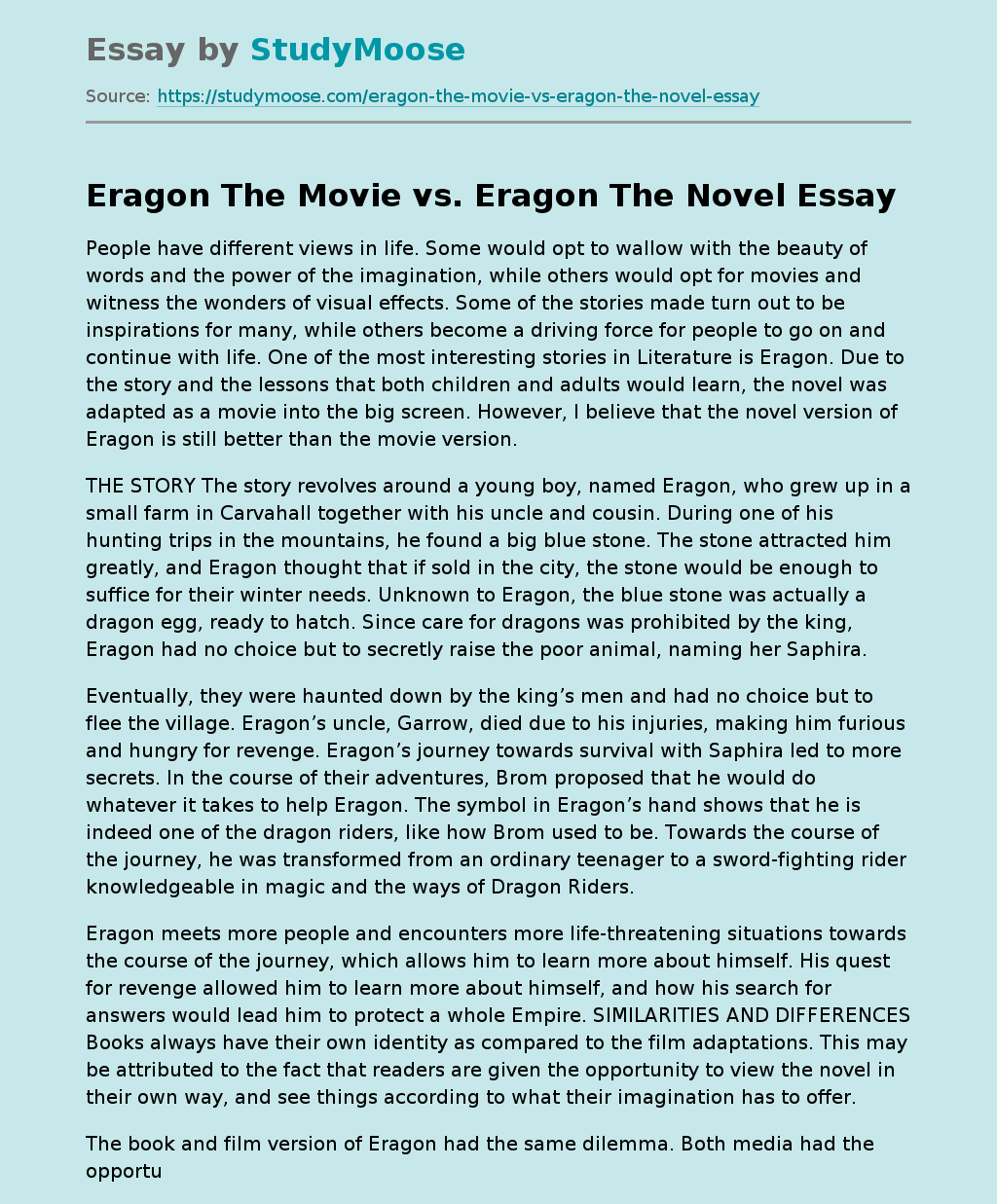