Epic Hero and the Values of the Society

The hero of an epic is characterized by their extraordinary abilities and strength which helped them to meet all the challenges they need to face along their journey. They are the main subjects of these long narrative epic poems. The epic hero is separated from the rest of the people. They are being admired by others for their ability to do what ordinary man would not attempt to do. The birth of these heroes was taken account into. These men are destined to play an important role in their society.

They also became the reflection of the values of their society. Epic heroes are mythical characters taken from the ancient times.

These heroes are larger-than-life because of their impressive and heroic deeds that can surpass what ordinary man can do. More specifically an epic hero must posses certain qualities to recognize him as a real epic hero. They must possess great physical strength. They are more clever and cunning than the ordinary.

They are adventurous and brave. They are not easily intimidated or frightened by the challenges ahead of them. They have goals and are highly determined to attain their quest for something they believed is of great value for him and to his people. They are victorious most of the time with the battles they encounter.

Their success gave them recognition. Their society may choose him to be their rightful leader or ruler because of the marvelous thing they proved they can do. After learning this things about an epic hero one can observed among epic poems this pattern of the heroes characteristic.

They seem to be similar in many ways. Along with other epic heroes of all times are the names like Beowulf, Gilgamesh and Odysseus. Looking at how each of the heroes had transformed themselves through the various test and preparation they undertake before they are recognize as heroic leaders.

They come from different backgrounds and culture which they typically embodies. Beowulf: the Old English Epic Who is Beowulf? What was his exploits? What values where important in his society? These are the questions that will guide us to discover more about the epic hero Beowulf. This epic poem had been written in England though the setting of the story could have been in Scandinavia. Beowulf as many knew is one of the most important surviving Anglo-Saxon classic literatures. This epic was believed to have been written between the 8th and 11th centuries. (Foster, 2003) Beowulf was recognized as a Geat.

He was known by others as a super human. One of his greatest achievements was when he defeated Grendel in an encounter. Beowulf fought one-on-one with Grendel which was known as a monster an enemy of the people of that time. Beowulf came to rescue the people of that kingdom from Grendel. To show his successful defeat of Grendel he brought home Grendel’s head. During the struggle, he won because of the help of a magical giant sword. Beowulf then also battle with Grendel’s mother who was plunge deep into the earth. He faced alone the monster found in the underworld. After he won in this adventure he didn’t become immediately the new king.

He fought for the throne along with King Hygelac. King Hygelac died during a raid and was then offered the throne but he refused and let the king’s son inherit the throne. Because of his many heroic acts the Danes were please. The Danes and the Geats are then united. The people now anticipated Beowulf to be their new king. He must face other more dangers to prove himself worthy to be called the King of the Geats. His last battle involved a fight with a dragon. By that time he was in old age and has been ruling the Geats when the dragon came and threatened his kingdom. He needs to defeat this dragon to save his people from danger.

He must risk his own life to achieve his goal of saving the kingdom. In this battle he successfully killed the dragon but it left him seriously wounded. He then had to face his death. Odysseus: The Greek Mythical Hero After Beowulf is another famous epic hero by the name of Odysseus. Odysseus also with Latin name Ulysses was the reigning ruler of the island kingdom of Ithaca. (Hunter, 1997) unlike Beowulf this man was already enthroned as a king. In the Trojan War he was the key heroic figure meaning he was among the well known leaders of the Trojan War. Odysseus was actually reluctant to join the expedition.

Even if he doesn’t want to join the battle he still fought heroically in the Trojan War. He even led the dangerous nocturnal raid together with Diomedes. It was believed that Odysseus was one of the originators of the Trojan horse which were used by the Greeks to finally take over the city of Troy. His journey was specially guided by divine intervention. After the Trojan War Odysseus next quest is to successfully return home with his family. Now returning back on his family was his main goal but the journey is very difficult and there are many things he needed to pass through.

He also needs to face the underworld just like Beowulf who fought in the world of the dead. The difference with Odysseus is that he didn’t fight but rather talk and ask some questions. In this journey he came to the point that he need to choose between mortality and immortality. He chose mortality because he wants his home together with his wife Penelope. Going back home he encountered various tragedies like when his ship was destroyed by a thunderbolt and a storm and when he was trapped in island of the Nymph Calypso.

Many things have happened after the war and on the way home. When Odysseus came at last he found that there were problems in Ithaca also. It took about twenty years before he successfully returned to his home. He found out that his wife Penelope had remained faithful to him all through those years even though there are pressures for her to get married again. He arrived at the palace and found the suitors of his wife. He pretended to be a beggar and destroyed all of them afterwards.

Epic Hero and the Values of the Society. (2017, Jan 17). Retrieved from https://studymoose.com/epic-hero-and-the-values-of-the-society-essay 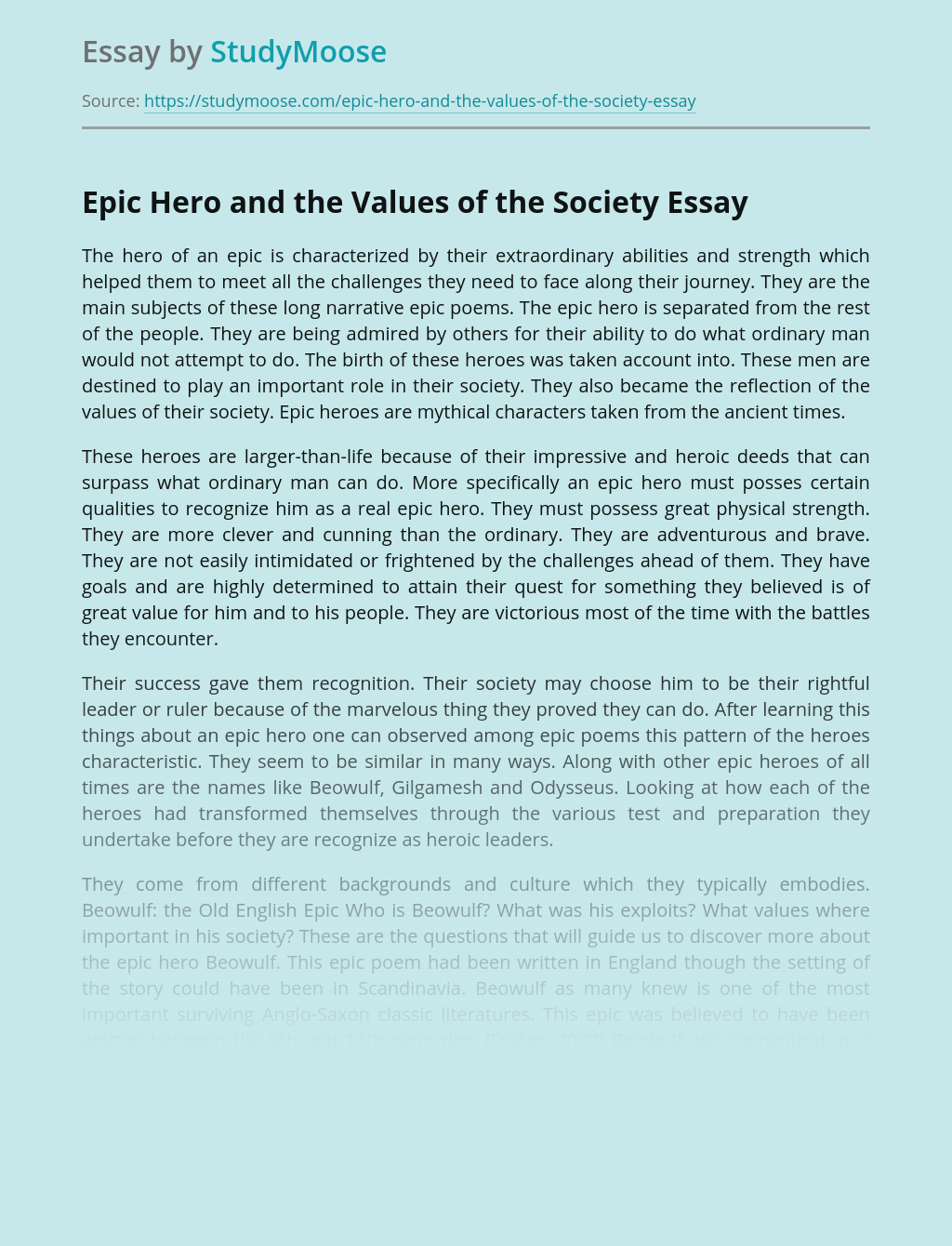 Francis has entered LaSalle’s tenement with the intentions of killing LaSalle. Francis is very quick to declare the reason for his presence at Larry’s tenement. Ever since Francis came back from the war, killing Larry is all Francis has wanted to accomplish. ‘Say your prayers… I rehearsed those words so many times through the years.’...

Leadership of Our National Hero Rizal

“Does Rizal deserve to be our national hero?” This article written by Renato Constantino, is all about Rizal that does he really deserves to be a hero or not? The author compared Rizal to others national heroes in different countries, who is most decisively active in the fight for their freedom and leader of that...

Get Essay
Epic Hero Comparison(Beowulf and The hobbit)

The Shifting Values of Youth

From the early seventies through 1986–87, private materialism as a life goal increased greatly in importance among youth, goals relating to family life increased somewhat, public interest concerns diminished modestly, and the goal of personal self-fulfillment declined sharply. Accompanying this shift in values was a change in young people’s college majors and career plans toward...

In America our society has always been a morals run country, from our domestic everyday lives. Our society, groups with different civic values with who have a lot of power on our lives that we live everyday which includes schools and religious groups. There are some individuals who hold our civic values to a higher...

What makes someone a hero? Is it saving lives, acting in a moment, speaking out, or sacrificing your life to fight for others? Can it be a superhero or can it be more common such as your relatives, friends or pets? Some people can be kind and courageous but only some get credit for it....

An anthropologist named Richard Borshay Lee and his wife Nancy lived with the !Kung Bushmen for three years in the edge of the Kalahari desert. He decided to be involved and celebrate Christmas with them, even though they don’t fully understand the holiday, but have an idea of what the holiday is about. They do...