Environmental Impacts from over Population

Introduction The population of human beings on this planet has been gaining exponentially, since the dawn of Man. A basic feature of an exponential increase is that the numbers increase faster and faster as the population doubles and redoubles, with each doubling occurring in the same amount of time (Wright, 2008), As the population continues to multiply, so do the impacts upon our environment and surrounding ecosystems. As human populations increase, the demands for food, supplies, and housing also increase. With these increased demands, there is now a greater strain upon our resources more than ever before.

Don't use plagiarized sources. Get your custom essay on
“ Environmental Impacts from over Population ”
Get custom paper
NEW! smart matching with writer

The question then becomes, what are the impacts upon our environment by our population situation, and is there anything that can be done to deal with the problems from this dilemma? Population Impacts As civilization has continued to grow and develop, so has the impact upon our environment by our exploding population. As mankind began to “modernize”, the Earth began to feel impacts by the choices made from its inhabitants.

As societies were still nomadic in their nature, mankind would use the resources of the Earth to their fullest extent, and then move on to the next area. This started with slash and burn techniques, and for the first time, CO2 levels were modified (Sharp, 2000) As the population of the planet continued to surge, the next great impact upon the environment would be the industrial revolution of the 1800’s.

With the boom of the industrial revolution across the world, the demand for natural resources and the impacts upon the environment would soar.

More people and natural resources were needed to sustain the new industrial system and the needs of growing societies (Sharp, 2000). The impacts of the industrial revolution were great and vast. For the first time in our world’s history, we could see the potential impacts of using our natural resources and dealing with an ever-growing worldwide population. The effects of population growth upon the environment are becoming revealed at an alarming rate. Between 1960 and 1999, Earth’s population doubled from three billion to six billion people (Rand, 2000).

The world has changed dramatically over the last several years. The landscapes and ecosystems that were present hundreds of years of ago are no longer in existence. We are consuming our natural resources at an alarming rate. In fact, many environmental experts believe that human beings have reached their carrying capacity of sustainable life. How do we meet the challenges of population growth and managing our natural resources without exploiting the environment? First, we must begin to invest in technology that does not degrade the environment (Sharp, 2000).

This is very critical to the retention of a sustainable environment for our future. In the past, countries developed around their economic strength. This factor often meant that most nations did not consider long-term environmental impacts by their decisions. These “slash and burn” techniques by many nations have resulted in devastating consequences to our ecosystems. There are entire species that have become extinct, all in the name of economic progress. This short-term economic gain for many of these nations has resulted in effects that will be felt from generations to come.

There is still a great deal that we can do to preserve the environment and place a halt to the devastating environment impacts of our population growth. Our sustainability not only depends on us meeting this challenge, but also presents an opportunity to provide for the future of our civilization. An encouraging note is the simple fact that many companies are now becoming “green” companies, meaning that they are attempting to be environmentally conscious and pursue policies that offer to protect and not neglect our environment. The answers to this problem are two fold.

As a nation, we are consuming natural resources at an alarming rate. We consume more energy per capita than any nation on this planet. Moreover, we must develop better land-use policies in the developed world. The “slash and burn” tactics of the past must be stopped and we must acknowledge the fact that we cannot destroy entire ecosystems that have taken hundreds of years to develop, and believe we can replace them by simply planting hundreds of trees that will take years to grow. The impacts of our decisions are great. The choice is clearly impacted by economic factors.

As a nation, our demand for consumer goods is at a high level. While our population is growing at a slow rate, our consumption levels have never been higher. Many Americans do not focus on the environmental impacts of their decisions today. We must implement sound environmental policies that embrace this factor. The choices are clear for society. As the population of the world continues to soar, so will the stresses upon our environment. There will be a greater need for usable water, natural resources, and even greater energy demands.

While these demands pose a potential calamity for the environment, they also create opportunity for new industries. As mankind begins to recognize the negative effects upon the environment by poor decisions and usage in the past, we as a society can create and environment that fosters the development of “green” industries and elect government officials that encourage policies that promote the well being of our environment. Conclusion The effects on our environment from our population are visible everyday.

One need only look to the smog filled sky, or read the newspapers decrying the shortages of drinking water, and the battles that are ensuing to lay claim to that drinking water to realize the impact of the decisions that face us as a society today. We can change the way we live and stop the poor use of the environment, and we can control the growth of the population in third world countries, or continue the status quo. If we choose poorly, we will face an environmental impact that will test the sustainability, not only of our civilization, but also of our planet.

Environmental Impacts from over Population. (2018, Sep 14). Retrieved from http://studymoose.com/environmental-impacts-from-over-population-essay 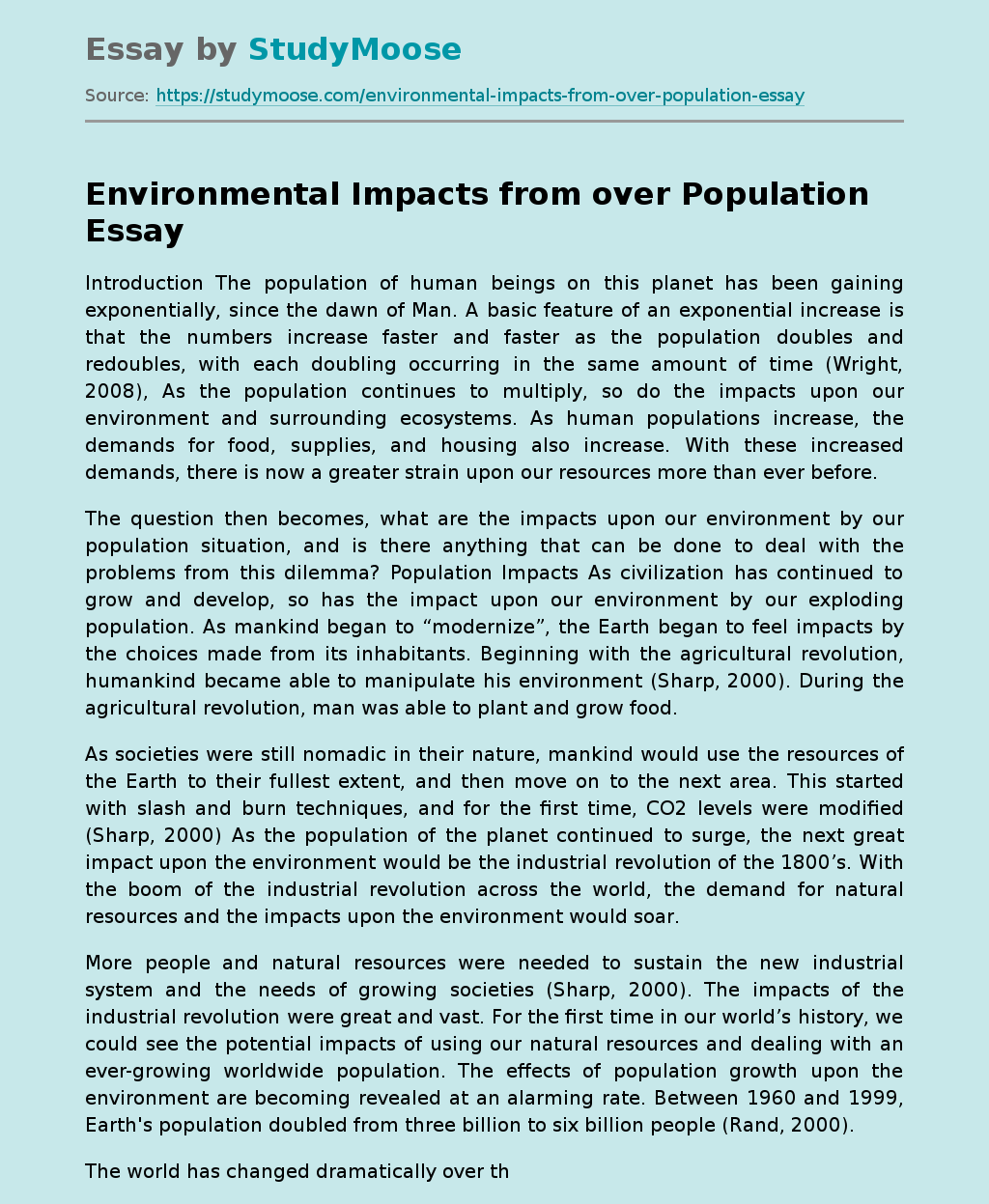