Control Over the Population in Novel "1984"

Throughout the novel 1984 George Orwell demonstrates his creativity through an intense read on a made up time in history where the government had complete control over the population. Orwell pulls his readers through a dark era where no man could think for himself and was under strict orders. Every character is to follow strict rules and act the same but Winston choose not to and began keeping a diary and seeing Julia. These events led to many hard times and problems for both Winston and Julia and there is extreme betrayal.

Don't use plagiarized sources. Get your custom essay on
“ Control Over the Population in Novel “1984” ”
Get custom paper
NEW! smart matching with writer

Orwell wrote 1984 to display what could occur in the future he tied in many themes and details to make the book seem feasible or true. The theme of physical control is displayed throughout the whole novel, by using conflicts, imagery, and symbolism Orwell is able to write a novel displaying physical control between characters and a government.

Throughout the novel 1984, the characters must all think the same and follow the same strict rules, there is no individuality.

Conflict is used to create the theme of physical control in many ways. “It was inconceivable that they could frequent this place for more than a few weeks without being caught.”(Orwell 138). The quotation displays an internal conflict that Winston was having, he knew the location was not safe but enjoyed having somewhere private with Julia. It’s displaying physical control by if the two don’t find a different location they would end up arrested or killed. “‘You may as well say good-by’” ( 222).

This was the last statement Winston made to Julia before being arrested. He was arrested for simply being with a woman and loving her, Winston and Julia may have broken laws but it was physical control by not letting a human love another. This was a conflict because Winston and Julia were being arrested for loving one another and had been betrayed by Charrington. Conflict is a large part of the theme by often driving characters to do wrongful things that are against the harsh laws and end in physical combat and problems.

In addition to conflict, imagery is also used throughout the novel to project the theme. “In the far distance a helicopter skimmed down between the roofs, hovered for an instant like a blue-bottle, and darted away again with a curving flight. It was the Police Patrol, snooping into people’s windows.” (2). Winston is witnessing the invasion of ordinary citizens privacy, this is considered physical control due to the citizens not having any privacy and if the Police Patrol found even the smallest problem that person would be arrested. Orwell created an image of the helicopter flying around which added to the theme by displaying how strict laws and regulations were. “As he mechanically shot his arms back and forth, wearing on his face the look of grim enjoyment which was considered proper during the Physical Jerks”(32). Imagery is displayed by showing what Winston is doing and how he is swinging his arms and trying to wear a smile. Winston was required to do this morning exercises and was pushed through it along with all other citizens in his town. Physical control is displayed by Winston being scolded by the instructor during the workout and he was forced to do the workout or else he would be killed or arrested. Imagery displays many pictures of how the people in Oceania were controlled and treated. The theme of physical control is put into very good perspective when Orwell gives extreme details and information like the scene of the helicopter.

Along with conflict and imagery symbolism is used throughout the novel as well. Throughout most of the novel there is the symbolism of “Big Brother”, “Big Brother Is Watching You”(2). “Big Brother” is symbolizing a higher power (like a God) to those who live in Oceania, this symbol displays physical control as the citizens are constantly being watched by the government and they aren’t able to be themselves and express differences. The memory holes were also a large symbolism throughout the novel. “There was a memory hole in the opposite wall…Unseen, the frail slip of paper was whirling away on the current of warm air it was vanishing in a flash of flame.”(247). The memory hole symbolized the removal of all or any evidence of the past and of anything factual. This is physical control as all papers must be put into the memory hole or one could be arrested or killed. The memory hole burns all evidence of the living so future generations can not know the truth of their ancestors. Both the memory hole and “Big Brother” are symbolized throughout 1984 and restrict the citizens from living freely and peacefully.

Throughout the novel George Orwell introduced many themes and a key one was physical control. The theme displayed many problems for the characters and put them into tough situations. The theme allows the reader to understand the struggles some may go through and how that society was. Physical control was displayed in so many ways, from restrictions on love, invasion of privacy and even the burning of one’s valuables. Throughout the novel there was many concepts used to display the theme such as conflict, imagery and symbolism, these concepts led to an intense theme that kept the reader indulged and elated. 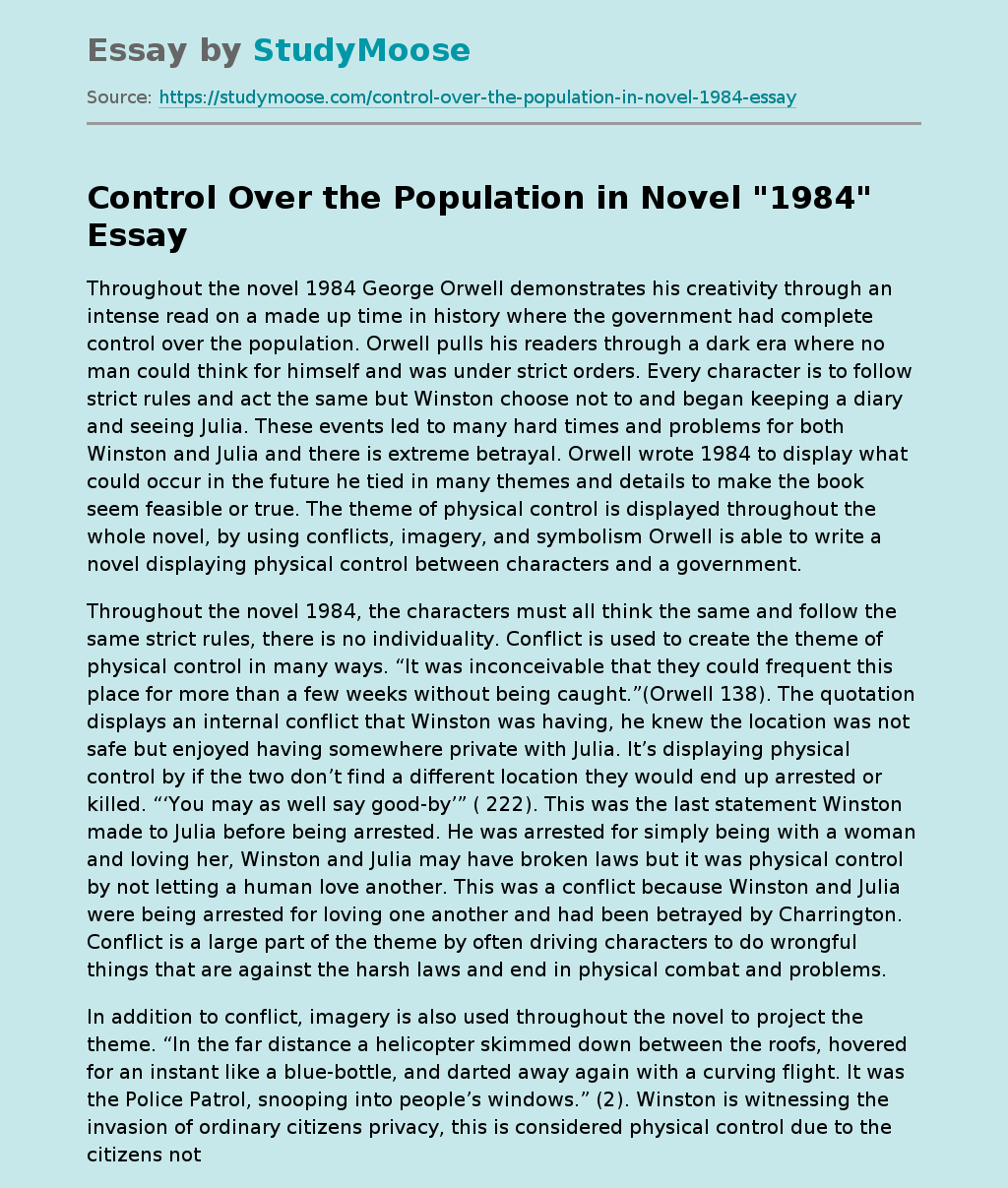