Argument Synthesis
It is important to control the dog population without causing unnecessary or avoidable animal suffering. Stray dogs are not only seen as a nuisance, but also as a safety hazard. Veterinary services play a lead role in preventing diseases and ensuring animal welfare and are involved in dog population control, coordinating their activities with other competent public institutions and agencies. Local animal control organizations, such as the Capital Area Animal Welfare Society in the Baton Rouge area, have been trying several different methods to control the stray dog population in residential Baton Rouge.

The Cornwall Council from the Seattle animal shelter defines a stray dog as “…any unattended dog on public or other land. It does not include a dog on its owner’s property or on any other land where it has been allowed by the occupier or landowner. It also does not include any dog under the charge of its keeper, even if it is not on a lead.

” (p.27) When animal shelters take in a dog they found astray, they typically give the owners one week to try to reclaim their pet before adopting it out, because it is often hard to determine whether or not the dog that was taken in was homeless or not if it was not wearing a collar. Most organizations for controlling the stray dog population result in euthanizing several hundred or even thousand dogs a year, but is that really necessary? Spaying or neutering the stray dog population is far more humane than putting it to death.

But on the contrary, researchers such as Rahul Sehgal claim that spaying or neutering is almost pointless. But is that true considering euthanization is nearly the same concept? Rahul Sehgal, a researcher mentioned in the article “Slum Dogs” states that “It does no good to swoop in with a crew of vets and techs and spay every dog you can get your hands on and then leave. Even though it makes us feel great to spay or neuter a couple hundred dogs, it doesn’t take long to wipe out the progress you’ve made.” However, in the last few years, new methods for population control have been established. When Rahul Sehgal traveled to the Philippines last year, his original purpose was to teach animal shelter workers a better way of killing dogs removed from city streets—by helping them replace electrocution methods with lethal injection. But in a country with an estimated 10 million stray dogs, Sehgal knew a more radical approach was needed. He states in the article “Slum Dogs that “I told them that while humane euthanasia was a worthy goal, it would be an endless process. All they’d be doing is killing a lot more animals but doing it more humanely.” But isn’t that the point? To create a way to control the population in a humane manner is necessary and euthanasia is the only socially acceptable, to an extent, and painless method we have today. The hard part about controlling the population is when to decide that it is really necessary to euthanize rather than just spay or neuter. The importance in keeping a leash on the population is that stray dogs are often a safety concern in residential areas because they sometimes carry rabies and other diseases and dog bites have been reported occasionally.

In a study conducted by A. M. Beck and B. A. Jones in the Public Health Rep, they found that, “Children were bitten more frequently by the dogs owned by their neighbors, followed by their own dogs, than by strays or by dogs whose owners were not known.” That statement clearly signifies that stray dogs have been taking the blame for dogs that have owners that are irresponsible. It is unfortunate that these stray dogs take the blame for irresponsible dog owners because in the media, a dog bite will quickly lead to euthanasia of the dog. While euthanasia is sometimes seen as the only answer, humane societies are always eager to put an end to it. Julie Falconer, the author of the article “Slum Dogs” states that “What most people do is go to the government and on an emotional note they’ll say, ‘You’re killing dogs and they’re so sweet and they’re man’s best friend,’ and they’ll shed a few tears and they’ll talk about a protest march and they’ll antagonize,” (p.2) Falconer says. Why should innocent, stray dogs be responsible for careless pet ownership? In a detailed analysis of all the reported dog bites that occurred over a 2-year period in St. Louis, Mo., by A. M. Beck, H. Loring, and R Lockwood states that “…more than 85 percent of all the biting dogs had owners. These results indicate that society’s views of dog bite injury, which tend to minimize the problem and find fault with the victim, must be re-evaluated. It is time to place less emphasis on the victim and even the animal and review the public health implications of dog ownership.” It is believed that population control and the effects humans have on animal behavior are all tied together. Cleverly put by A.M. Beck, he states that “Residents see stray dogs as a problem, whereas at the same time, the problem of stray dogs often starts with the residents themselves.” That being said, the promotion of responsible dog ownership can significantly reduce the numbers of stray dogs and the incidence of zoonotic diseases, such as rabies. Because dog ecology is linked with human activities, control of dog populations has to be accompanied by changes in human behavior to be effective. Stray dogs are often seen as a nuisance because they will dig in people’s trash cans and make a huge mess searching for food because they are starving to death. If pet owners would feed their pets regularly, they will probably not choose to venture off to their neighbors trashcans. Have you ever wondered what the main factor is that leads to the overpopulation of these dogs in the first place? A major reason for overpopulation of stray dogs is humans neglecting or mistreating them. Charles Siebert, the author of the article “New tricks” says “Dog abandonment is hardly a new phenomenon. Still, the overwhelming number of canine outcasts being taken in and put down in recent years is now prompting animal shelters — places, by definition, of surrender — to fight back.” (Siebert p. 1) If a new dog comes into a family and is mistreated or not fed, it is likely to run away and become a stray. If that dog was not spayed or neutered prior to it running away, then it will quickly breed with other stray dogs, creating even more stray dogs, and so on, and leading to overpopulation.

The most common type of animal cruelty is neglect or abandonment – that is, people not providing adequate care for animals in their charge. These types of cases often involve situations where an animal is left without food, water or shelter, or when proper veterinary care was not obtained. In many of these cases, the underlying reason can almost always be explained by the caretaker’s ignorance. While ignorance can be blamed in some of these situations, an additional cause that seems to be a major contributor to neglect and abandonment cases is that the pet owner simply does not care. Even people with only the most basic knowledge of animal care can see that an animal has degenerated to the point where it is only skin and bones, and those types of pet owners typically bring their pets to the pound so someone else can take care of the dog. The records of dogs in an animal shelter in Chester County, PA, these records published by Berg Publishers, were analyzed for a 3 1/2 year period to describe the canine population dynamics and to identify the risk factors for dogs’ failure to be reclaimed and to be euthanized. Dogs over 1 year of age accounted for the majority of incoming dogs. Forty-one percent of dogs received by the shelter were purebred. The six most common breeds were the Labrador Retriever, German Shepherd, Golden Retriever, Beagle, Cocker Spaniel, and Siberian Husky, accounting for 50% of all incoming purebred dogs. Over two-thirds (67.7%) of purebred dogs were reclaimed by their owners, compared with 41.2% of mixed breed dogs. More purebred dogs were reclaimed the same day they were admitted than mixed breed dogs (46.1% vs. 38.0%). This information states that people who appear to pay more money for a purebred dog are more likely to take good care of the dog and not turn it into the shelter to find a better home versus the mixed breed dogs of no value. In the first edition Applied Animal Ethology, Hildy Rudin states that the “Knowledge that pet dogs roam more extensively the more time they are kept unrestrained may encourage dog owners actively to confine their pets and obey leash laws. That is, control laws will appear less arbitrary and more consistent with the best interests of the community.” (p.161-168) That being said, Rudin concludes that “In addition, the relatively small ranges of pets that are only occasionally permitted freedom may be utilized by animal-control personnel as a management tool; it is more efficient to coax an animal back home, rather than capture it in the hopes it will be retrieved by the owner”. (p. 161-168) Unfortunately, only about half of the stray dogs turned into an animal shelter will be reclaimed by the owner. In A. M. Beck, H. Loring, and R Lockwood’s study, “53.8% of the stray dogs were returned to their owners. The reclaim rate was lowest (10.8%) for dogs less than 4 months of age, and highest (68.8%) for dogs’ older than 10 years of age.” The reasoning behind the older dogs being far more likely to be reclaimed is the family’s attachment towards the dog over a long period of time. Also, puppies are more likely to stray from home, as they are still figuring out where home is located since they have yet to form a bond with their owner. Adopting a stray dog from an animal shelter is always, of course, a beneficial method to control the stray dog population in a given area rather than resulting to euthanasia. However, it is important that before adopting a stray dog, the owner is not ignorant of proper dog care and has enough time to spend with the dog to avoid neglecting it, or returning it back to the shelter. Overall, if humans can learn to be more humane themselves, there wouldn’t be as big a need for a local or even national humane society. It is never an innocent dogs’ fault that it is a stray, but rather the humans themselves’ that once thought they were responsible enough to handle a pet in their home. 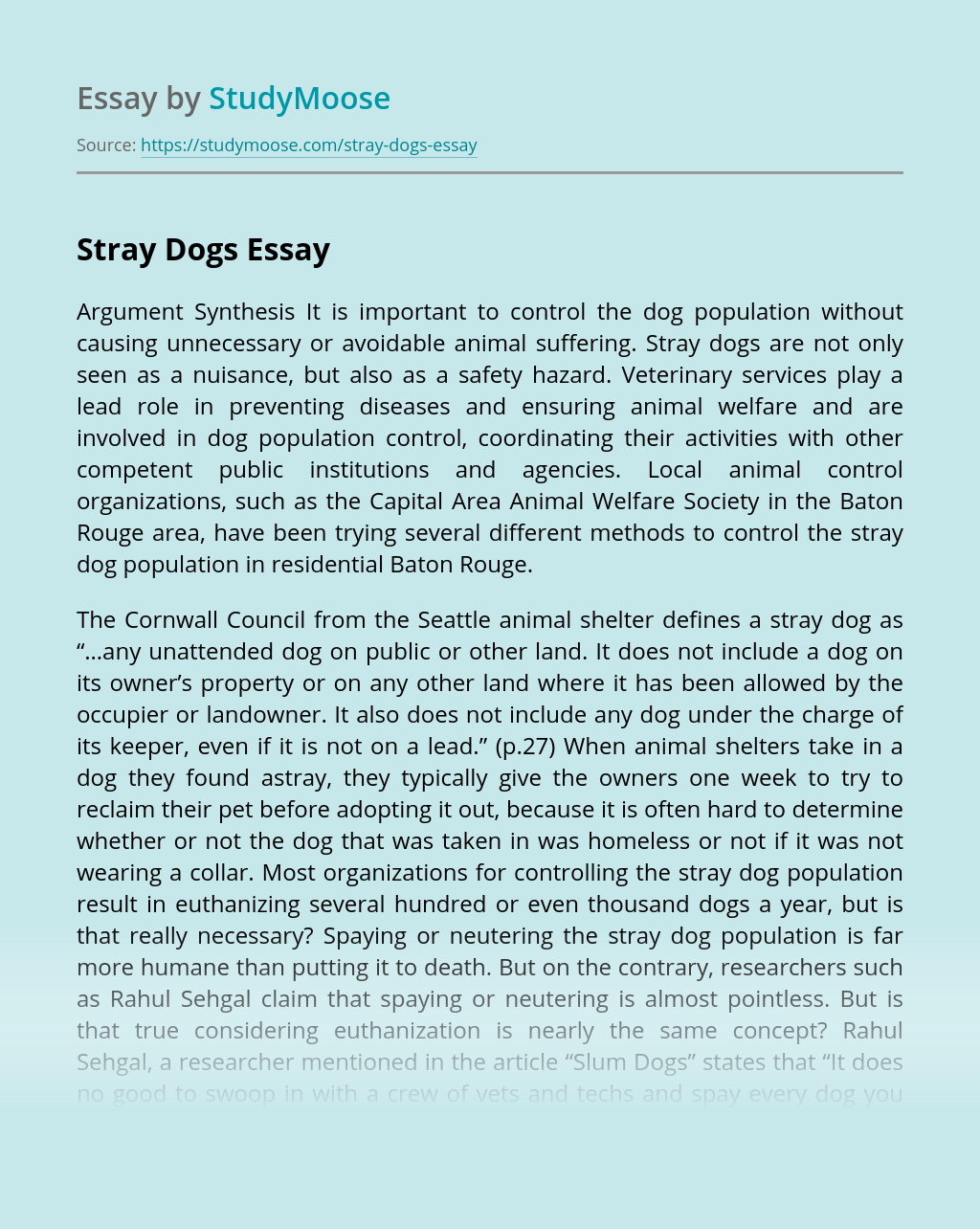