How many of you take New Year resolutions? How many of you stick to your New Year resolutions? It is not very surprising to see lesser number of hands. Research has shown that 90% of the people give up on their New Year’s resolutions, before the end of January and guess what, majority of the remaining 10% give up before the end of the year. The initial enthusiasm you see in January vanishes soon like a piece of butter placed on a hot pan.

Don't use plagiarized sources.
Get Your Custom Essay on Entertainment Speech Just from $13,9/Page

Today, I’m going to give you some tips to effectively reach your New Year resolutions.

Many a times New Year Resolutions fail because “People try to desperately RUN AWAY from their bad behaviors”. Instead of RUNNING AWAY from something, focus on RUNNING TOWARDS something. The only time RUNNING AWAY FROM SOMETHING works is when you are chased by a hungry dog.

When you try hard to UNLEARN your bad habits, you focus too much on the BAD than focusing on the GOOD.

For example, when delivering a speech, the more you focus on getting rid of nervousness, the more nervous you become. Instead, you should focus on how you would feel if you deliver the speech successfully.

One of the prominent New Year resolutions is to QUIT smoking. Zig Ziglar, the powerful motivational speaker was a “three-pack-a-day” smoker. Cigar was almost like a 6th finger in his hand. He had a New Year resolution to quit smoking. I think he was so passionate about that resolution. He took the same resolution every year for more than 20 years. He had tried to quit many times using every tool and technique he heard about. He tried all the things from applying “patches” to destroying the “matches”. But as long as he was trying to QUIT, he couldn’t break the grip.

Finally, he changed the approach. Instead, of trying to QUIT the habit of smoking, he developed a dream to become a non-smoker. He fell in love with the idea of breathing clean air instead of smoky air. He wanted his body and clothes to smell nice instead of smoky. He decided to start acting and thinking like a non-smoker, and when the thinking took hold he simply quit smoking.

Get support from your friend (or) spouse

How do you sustain your newly formed habits? Get help from your spouse and all your friends. Ask them to “remind” you. They’ll do it very sincerely.

I read an interesting story from a book. Dan, a young man in his early 30s took a New Year resolution of getting up early and do jogging. He asked his wife to wake him up at 5 o’clock in the morning. Every day, his wife gets up at 5 o’clock sharp, wakes him up and goes back to sleep. He was very happy that his wife is very supportive to reach his goals. But, do you know the real reason why Dan’s wife woke him up everyday? Dan snores a lot during sleep. If she wakes Dan at 5, she can get at least a few hours of peaceful sleep in the morning.

Your friends and spouse will remind you promptly about your goals – if not for selfless reasons, they’ll do it at least for their selfish reasons. After all, they get some credit too, if you become successful.

New Year Resolutions are easy to make – but hard to sustain. Experts say it takes 3 weeks to develop a new habit and 6 months for it to become a part of your life and just 1 week to completely give up. Giving up a resolution is THAT easy. Focus on what you WANT TO BECOME than focusing on what YOU DON’T WANT TO BECOME. Get the help of your friends & spouse. If you follow these, 2009 is going to be the first year where you will be reaching all your New Year Resolutions. 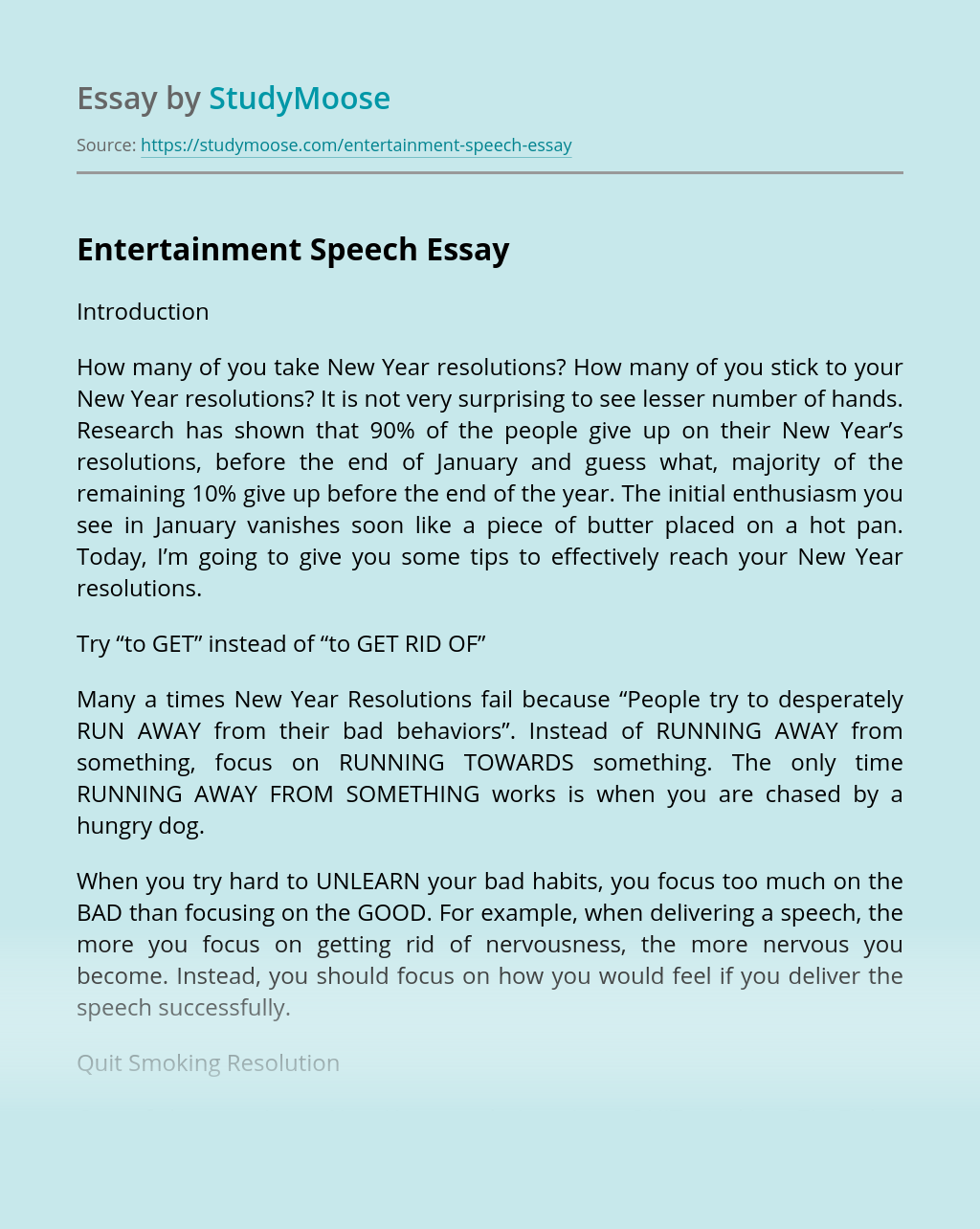 Fork in the Road

Most of us would have had the experience of being in two minds about something. It is like one part wants to do one thing while the other part wants to do something else. Most of the time we are able to resolve the conflict and get on with our lives. But at other times...

The visual images that are used in many advertisements are positioned to grab the attention of the ads intended audience. Advertisements are designed to persuade viewers that the argument the ad is presenting is realistic. Rather than simply presenting the product advertised, images are used to draw the attention of the viewers and convince them...

Get Essay
About the Future

Thank You for Smoking

„Thank You for Smoking“ is a political satire film by Jason Reitman. The film is adapted from a novel by Christopher Buckley. „Thank you For Smoking“ tells a story about Nick Naylor (Aaron Eckhart), who is a tobacco lobbyist. His job is to questioning opposing health claims and advocating personal choice and smoking. As he...