Energy drinks refer to beverages that contain, besides calories, caffeine in combination with other presumed energy-enhancing ingredients such as taurine, herbal extracts, and B vitamins. They ? rst appeared in Europe and Asia in the 1960s in response to consumer demand for a dietary supplement that would result in increased energy (Reissig and others 2009). In 1962, a Japanese company, Taisho Pharmaceuticals, launched Lipovitan D, one of the very 1st energy drinks, which is still dominating the Japanese market.

Lipovitan D contains B vitamins, taurine, and ginseng, which are all frequent constituents of mainstream energy drinks with the intended purpose of providing the consumer with sustained energy, and to reduce mental and physical fatigue (Taisho Pharmaceutical Co.

Don't use plagiarized sources.
Get Your Custom Essay on Energy Drinks Introduction Just from $13,9/Page

Ltd. 2009). Energy drinks did not make their way into the U. S. market until 1997 when Red Bull was ? rst introduced, which originated and was initially launched 10 y earlier in Austria (Reissig and others 2009).

Since the 1960s, the energy drink market has grown into a multibillion-dollar business which has been reported as being the fastest growing segment in the beverage industry since bottled water (Agriculture and AgriFood Canada 2008).

Energy drinks have established a viable position in the beverage market as evidenced by their commonplace consumption in the morning, afternoon, and night, not only by the general consumer, but those of age 18 to 34 in particular (Lal 2007). Athletes initially were the primary consumers of energy drinks.

However, as the energy drink market grew and expanded into various niche markets, athletes are no longer the primary target. Today, the majority of energy drinks are targeted at teenagers and young adults 18 to 34 y old due to this generation’s on-the-go lifestyle and receptiveness to advertisements for these types of products (Lal 2007). While the energy drinks and shots market may be a small component of the non-alcoholic beverage industry, it is perhaps the most dynamic market—growing 60% from 2008-2012 according to Packaged Facts estimates in the all-new research report Energy Drinks and Shots: U.

S. Market Trends. In 2012, total U. S. sales for the energy drinks and shots market was worth more than $12. 5 billion. Intense competition surrounds the beverage industry as marketers seek to increase market penetration and consumption frequency through positive alignment as a healthy and/or functional beverage. Thirst quencher/sports drinks remain the most formidable competitor for energy drinks as this type of beverage attracts a large constituency of energy drink users.

Energy drinks are subject to competition from other energy-boosting beverages such as coffee and tea beverages, as well as an increasing number of new product innovations that tap into the energy trend but are outside of the beverage industry. At present, energy drinks have the lowest consumption rates of any RTD beverage—a point which reflects the market’s relative infancy but also its growth potential. Experian Simmons analysis shows the growth trend of this market, with the incidence of energy drink usage among adults rising from nearly 13% in 2006 to 17% in 2012.

In addition, there is a modest segment of heavy users: 5% of adults consume energy drinks 5-7 times per month and less than 2% drink energy drinks 10 or more times. Packaged Facts estimates that energy drinks account for some 78% market share, followed by 18% for energy shots, and energy drink mixes (roughly 4%) in 2012. A few select marketers dominate the energy drinks and shots market. This demonstrates the first mover advantage in each category. The result is a market that is highly dependent on a handful of key brands, namely Red Bull, Monster Energy, 5-Hour Energy, and Rockstar Energy. 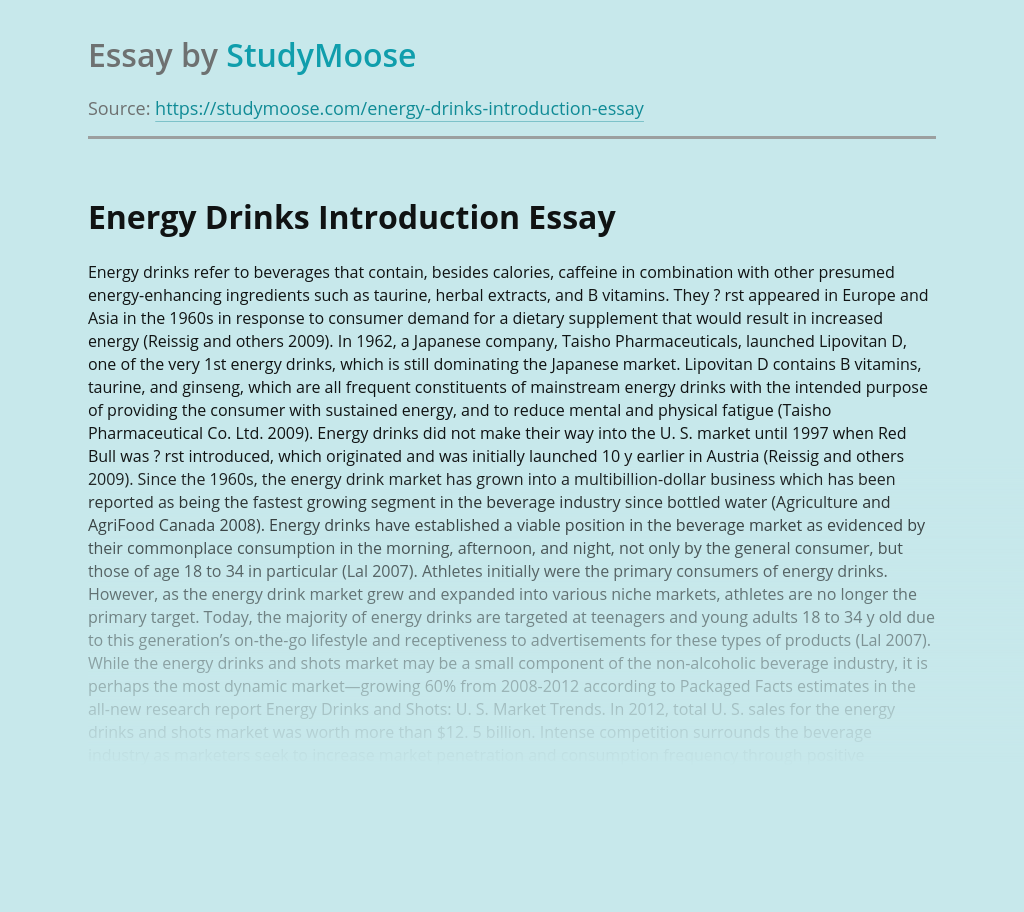 Cameron Auto Parts was founded in 1965 in Canada by the Cameron family to seize opportunities created by the Auto Pact (APTA) of 1965 between the United States and Canada. The APTA allowed for tariff-free trade between the Big Three American automakers and parts suppliers and factories in both countries. The one caveat in the...

Climate change can be defined as a long – term change in the patterns of weather. Climate system consumes the energy from sun. The term climate is different from weather. Weather changes for few days or months whereas climate occurs for a long period of time. Every place has different climate depending on the atmosphere...

View sample
Get Essay
Adversities in of Mice and Men

SteinbeckIn the novel Of Mice and Men, the problems experienced by the characters are often over looked in favor of the themes of the book. However, by looking at the adversities of all of the characters, one can see the same adversities expressed in our own lives; by examining these said adversities, one can also...

Question 1: Who were the key stakeholders involved in, or affected by, the collapse of Enron? How and to what degree were they hurt or helped by the actions of Enron management? Answer: Enron’s board was made up of 17 members. Out of 17, 15 were outsiders and only 2 were insiders. These two key...

King Ashoka is the Indian king and emperor of north India from 273 to 231 B.c. He was the grandson of Chandragupta Maurya. In his dynasty, Ashoka is considered to be the one of the powerful and cruel ruler of the Maurya dynasty. He is considered to be cruel because he kills his 99 brothers...