In her 1816 comedy Emma, Jane Austin presents her audience with a character who may seem difficult, presumptuous, meddling, and abrasive. Throughout the book, the author takes her time to break down the walls this character has put up, gradually bringing her around to a rather lovable young woman. Emma is a wonderful example of many correct ideas being portrayed in an incorrect manner. Though readers may tend to dislike her at first, Emma proves herself to be a character capable of incredible growth.

Don't use plagiarized sources. Get your custom essay on
“ Emma: A Character Analysis ”
Get custom paper
NEW! smart matching with writer

The first sentence in this novel drops a lot of information about the main character into the minds of the reader, stating “Emma Woodhouse, handsome, clever, and rich, with a comfortable home and a happy disposition seemed to unite some of the best blessings of existence; and had lived nearly twenty-one years in the world with very little to distress or vex her”. (Austin 1) Coming off of this, it is difficult not to have a strong and immediate opinion on Emma, which was probably exactly what Austin was going for.

The reader doesn’t have time to formulate any speculations on who this novel may be about; it is given to them quite clearly. As the novel progresses, there are many interactions with characters who admire Emma for her grace, beauty, mannerisms, and refinement. There is, however, one character who seems immune to the young woman’s charms. Mr George Knightly (not to be confused with his younger brother Mr John Knightly, who is married to Emma’s older sister) is a constant source of contention and strife, playing the devil’s advocate to most of Emma’s schemes.

He speaks the mind of the reader when he tells Emma that it is “better to be without sense than misapply it as you do”. (Austin 53) The two are old friends, but most of their conversations are argumentative, and usually center around one of Emma’s most recent actions. Despite this conflict, they are nearly always friendly to one another.

One of Emma’s traits that tends to stand out (especially considering the time in which this novel was written and takes place) is her aversion to the idea of marriage. That is not to say she abhors the concept – on the contrary, she spends a large portion of the book trying to match up others – only that she has no desire of her own to ever be married. She does, however, seem to take a great deal of joy in playing the matchmaker. The book opens on the aftermath of a wedding, and Emma takes full responsibility for introducing the bride and groom. She then takes it upon herself to find a suitable match for one Harriet Smith – a young girl whom Emma befriends quite early on in the story. Emma encourages Harriet to turn down the offer of marriage she has already received, turning her attentions instead to a much higher regarded gentleman in the community. Even though Emma raises some rather modern thoughts about marriage and women, declaring that “a woman is not to marry a man merely because she is asked, or because he is attached to her and can write a tolerable letter” (Austin 45), she ultimately causes many difficulties in the lives of those who take her advice, romantic or otherwise. Another trait Emma exhibits wildly throughout the book is her snap decisions on people around her. From Harriet Smith, whom she takes under her wing and pampers from the start, to Jane Fairfax, upon whom she immediately casts her dislike. This wild abandon in judgments causes her to misread both people and situations, landing her and her companions in some rather uncomfortable experiences.

The beautiful part of this character is that the reader gets to witness her growth from a young woman with some good ideas but poor execution into an elegant woman who is not afraid to express herself when the situation is right. Emma’s statements throughout the book begin to come less from a place of hotheaded emotion and more from a genuine concern for herself and those around her. It is plain to see that she begins to not only ponder the statements she is about to make, but reconsider things she rashly stated earlier on in the novel. At the beginning of the book she declares that she will never marry, in the middle that she will only entertain the idea if it does not mean sacrificing her own happiness, and at the end she warmly receives and accepts Mr Knightly’s proposal, committing to a warm and loving relationship on both sides. The final line of the novel is a wonderful conclusion to the book, “but, in spite of these deficiencies, the wishes, the hopes, the confidence, the predictions of the small band of true friends who witnessed the ceremony, were fully answered in the perfect happiness of the union”. (Austin 422) and it demonstrates how Emma has changed from single entity (as described in the first line of the novel) into a part of a “band of true friends”.

And so the story ends, leaving the reader to wonder just what will happen to Mrs Emma Knightly. The truth is, they don’t need to know. They have seen enough growth and change from this young woman in four hundred and twenty-two pages to know that she is on the right path. Jane Austin did an incredible job crafting such a multi-dimensional and forward-thinking character and wound up with an excellent example of just how much one can change when surrounded by the right influences while maturing. Throughout the book, the author takes her time to break down the walls this character has put up, gradually bringing her around to a rather lovable young woman. This should be a template for many young adults, learning how to lean into what they already know and bring it around to a mature and well-rounded personality. It can be a bit daunting to see one’s self in Emma near the beginning of the book, but the hope of change shown at the finale is well worth the struggle. Emma provides proof that it is possible to grow and change your ways without abandoning who you are and what you stand for. Her core values never changed through the tale, only the ways in which she went about expressing them. 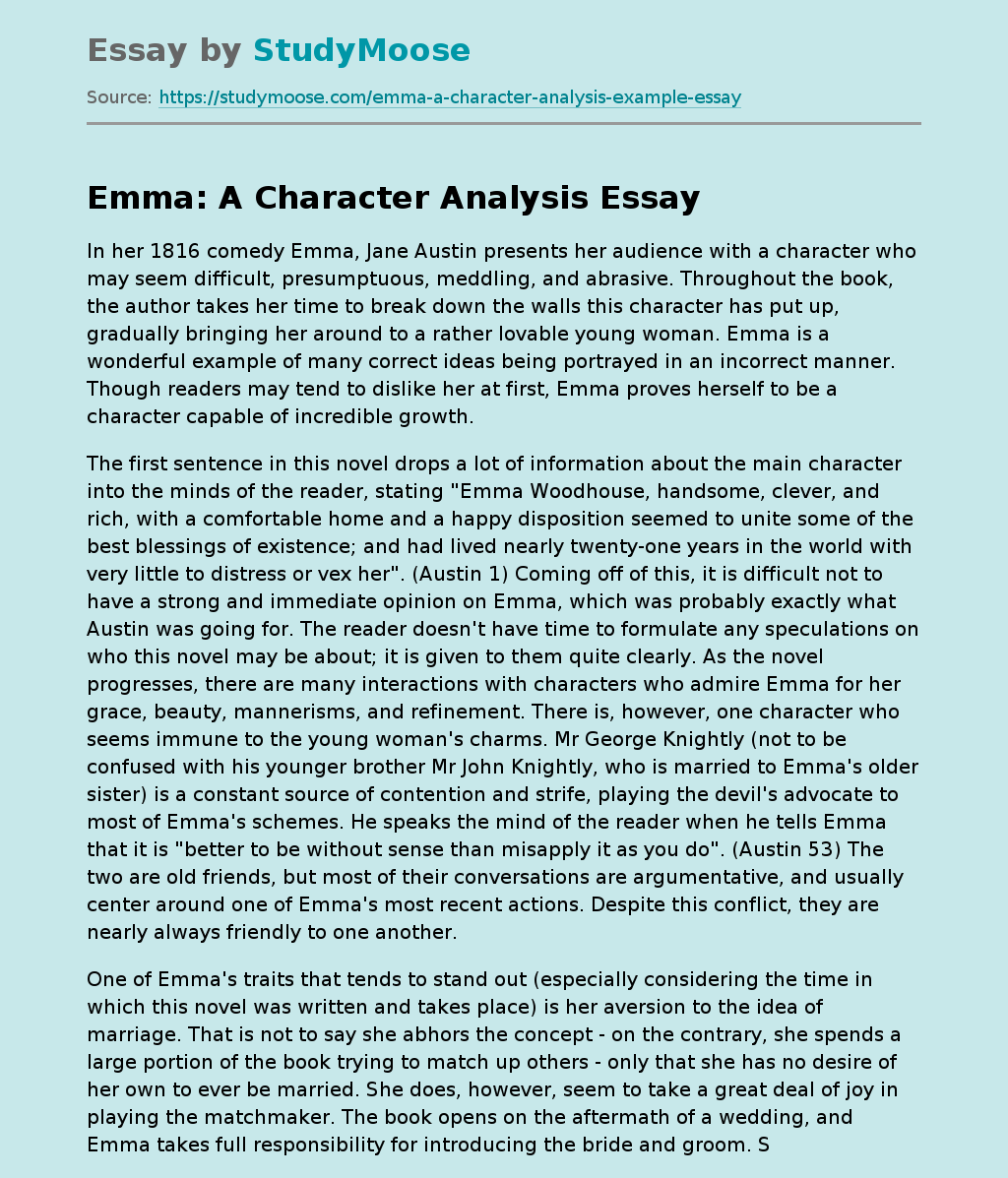