In her poem, There’s a certain Slant of light, Emily Dickinson uses metaphors and imagery to convey the feeling of solemnity and despair at winter’s twilight. The slanted light that she sees, is a metaphor for her battle with depression. Anyone who is familiar with Dickinson’s background will have a better understanding of what she is trying to say in this poem. Dickinson was known as a recluse and spent most of her life isolated from the outside world.

Don't use plagiarized sources. Get your custom essay on
“ Emily Dickinson’s “A Certain Slant of Light” Analysis Essay ”
Get custom paper
NEW! smart matching with writer

The few people that she did come in contact with over the years are said to have had a major impact on her poetry. Although, her main muse of her work seems to be despair and internal conflict.

What’s interesting about the poem is that Dickinson uses metaphors to describe depression, as well as religion. It is clear that the poet intends to highlight the light in the afternoon with its heaviness and solemnity. The time of year that the poet is describing is winter, while the time of day is twilight, or the afternoon, as said in the poem.

Often times, and how I’ve interpreted it, the season, plus the time of day can be considered a metaphor for death. In Dickinson’s, There’s a certain Slant of light, she used a metered rhyming scheme that follows the pattern of ABCB. Since the poem uses rhyming, it’s closed form. There are four stanzas that almost have a hymn-like rhythm. It’s unclear if that was intentional or not due the religious metaphors within the stanzas.

Dickinson used trochaic and iambic meters through out the poem. She also used stressed and unstressed syllables. The opening line of the poem, states the title and at the same time, introduces what the poem is essentially about. The poet goes on to say that the winter light, which slants in through the windows, weighs upon the speakers soul like “the Heft of Cathedral tunes.” Organs, with their multiple pipes, strike ears and fill Cathedrals with a sound that often leaves you with a feeling of unwelcome solemnity and grandiosity. This can leave listeners with an overwhelming feeling that lays heavy in their being.

The image of winter, as well as the organ music, adds gloom to the poem. There’s a sense of anguish that the speaker is feeling and you believe that a certain slant of light might connote hope, but not even sunshine on a winter afternoon could bring happiness into the speaker’s life. Winter itself is a symbol of death and decay, opposed to summer, which is characterized by sunshine and joy. Like the Cathedral tunes, the light reminds her of desolation. The feeling of despair is transported into an auditory feeling, which is where the organs come in. The word “heft” has two meanings, weight and significance. It can refer to the cathedral tunes, and also the speaker being weighed down by despair.

In the second stanza, the light oppresses her soul; it gives her a “Heavenly Hurt.” The experience of slanted light is a metaphor for ideas and how it feels to experience depression. This kind of heavenly hurt leaves no scar behind, but it creates an internal difference that brings a change in demeanor. The phrase “Heavenly Hurt” brings together a feeling of elation and the reality of what the speaker is feeling. The alliteration of this phrase is used as an emphasis.

In the third stanza, the first two lines are, “None may teach it – Any – ‘Tis the Seal Despair -” This is saying that no one is able to teach us what death feels like. We can prepare for it, in the sense of what we believe will come after, but the actual physical and mental feeling is unknown. Death is very unpredictable in the way that we don’t know how our lives will end, but it’s on everyone’s mind. In the line, An imperial affliction, Sent us of the Air – (11-12) the speaker has made a connection with the winter light, the “Heavenly Hurt”, and the feeling of internal difference and despair. In Dickinson’s poem, an imperial affliction is a metaphor for an all-encompassing despair that comes from the air. Whenever we have a strong emotion, like happiness, we tend to see the world around us in a brighter light and over all it makes us feel joyful. If we’re feeling down, like the speaker of this poem, we see the world as how we feel inside; things look unpleasant, and grey and dismal. We’re unable to see a ray of hope that is coming through the window in the form of sunshine.

In the fourth stanza, when death, or “it” as the speaker calls it, comes everything listens. When someone dies, those still on this earth sometimes experience stillness in nature, as if the world is on hold and listening to us. In Dickinson’s poem the stillness comes from the slant of light, and the landscape and shadows listen and figuratively hold their breath. The landscape and shadows are personified in this stanza. The capitalization of “Landscape” and “Shadows” gives the impression that the speaker is referring to someone she knows. The mood here changes quite a bit compared to the first three stanzas of this poem. You get a sense of anticipation instead of despair, and the oppression that the speaker has felt has lifted and now she’s feeling light and maybe some what alluring. In the final two lines of the poem, the poet uses sort of a morbid imagery.

“When it goes, ‘tis like the Distance, On the look of Death.” (15-16) Dead people have a distant look to them since the life in their being is gone somewhere else. We also see the exit of winter light at the end of the day in the same distant way we might see some deaths. Death is mysterious to those on earth, just as the sunset in the heart of winter is. The day is blanketed in shadows due to the sun’s proximity to earth during this season, and as it sets, it’s a gradual process, that sometimes leaves the world at a standstill, much like death. The dash at the end serves as emphasis that a period wouldn’t leave behind. As readers, we’re left with no definitive answers in regards to the light or the speaker’s internal despair. Dickinson almost made this intentional in a way that the reader might feel an equal despair or oppression at the outcome of the poem, or the “light” might leave us with a feeling of enlightenment and hope.

At the end of this poem, we’re left with a feeling of despair, that Dickinson almost made intentional in order for the reader to better understand how the speaker feels as the light breaks through the windows on winter afternoons. Emily Dickinson’s use of imagery and metaphors highlights her battle with depression and isolation.

Heavenly Hurt, it gives us –
We can find no scar,
But internal Difference,
Where the Meanings, are –

When it comes, the Landscape listens –
Shadows – hold their breath –
When it goes, ‘tis like the Distance
On the look of Death – 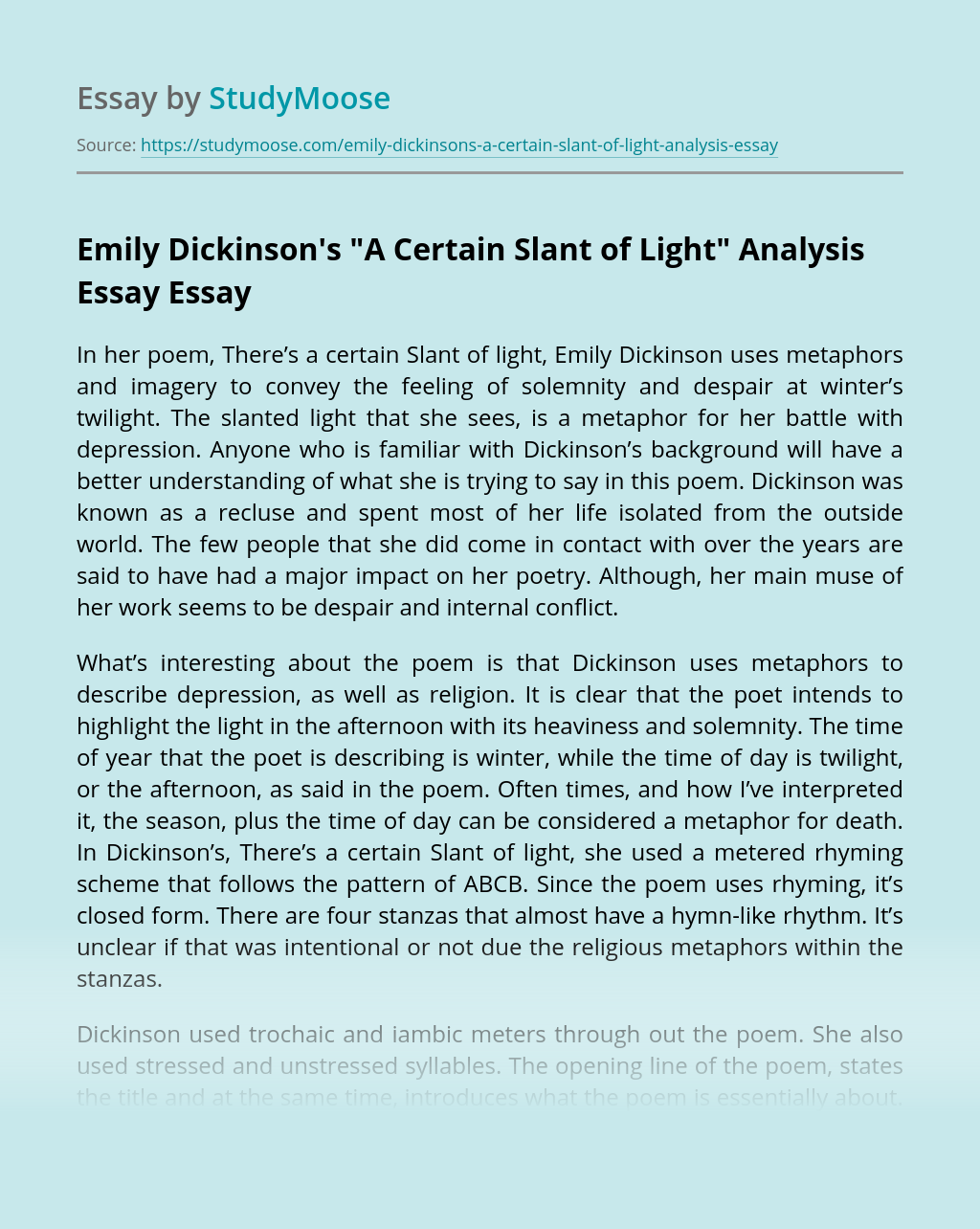