Acoustic guitar is type of guitar that uses acoustic method in projecting its sound. This kind of guitar is hollow and has a sound hole on its surface and mostly they have six strings. They were most common in folk dances and mellow songs but their usage has of late extended to blues and country music. Acoustic guitars are different from electric guitars in that the latter has more whistles and bells than the former.

Don't use plagiarized sources. Get your custom essay on
“ Electric Guitar vs. Acoustic Guitar ”
Get custom paper
NEW! smart matching with writer

How do the two types of guitars compare and differ? This is what this research paper will mainly focus on. Electric guitars according to Waring (2001; 112) were originally used in playing rock music but the first one to be used was in 1930 by a jazz guitarist.

Unlike in other products where it is clear who invented them, in musical instruments is a bit different because it is not known who invented many of them but there are those who claim to be the one like Gibson who claims to have invented an electric guitar.

Contrary to the electric guitar, (Roth Arlen, 2002; 78) acoustic guitar is more complex both in its look and in playing but once you get used, it becomes an easy and enjoyable thing. An electric guitar requires pickups to convert vibrations that are made by the chords into an electric current. One of the advantages of using this type of guitar is that the musical signals that are produced when one plays it could be altered electronically with some guitar effects such as distortion and reverb to suit your needs unlike in acoustic guitar where you have no choice apart from enjoying the preset sound which cannot be altered electronically.

(Roth Arlen, 2002; 90) Whenever one intends to buy a guitar, there are various factors that one should consider but the most important of these factors is whether you would be comfortable with the kind of guitar you are intending to buy and the kind of music you want to play. The two types of guitars are used for playing music and are played with hands however they differ in various ways. An electric guitar is much easier to play than acoustic and this is due to the way it is designed.

Electric guitar has strings that are near the frets thereby making it easier to push the strings down without straining while in acoustic guitar, you have to push the wires harder to the sound hole so that the produced sound would be amplified by the resonator. In electric guitar there are pickups and an amplifier whose work is to improve the quality of sound. (Millard A. J. 2002) When it comes to comparing the size of the two guitars according to String Letter Publishing, (2000, 52) definitely one finds that an electric guitar is smaller than acoustic guitar.

This is because the latter requires heavier gauge strings that are used in causing vibrations from its wooden top whereas an electric guitar has thinner wires and does not require a wide top to cause vibrations as there are pickups that take the sound to the amplifier. The neck of an electric guitar is also thinner than that of the acoustic and for this reason, it is much easier to play an electric guitar because its design allows one to wrap hands around it and allows one to position fingers in a way that facilitates playing.

, 2002, 98) Apart form the price, there are those who find electronic guitar to be confusing than acoustic guitar. They say that in the former you have to master how to play its many buttons and knobs but the good thing about it is that you cannot get sores on your fingers. According to Cross (2008), the two guitars play different roles in music because an electric guitar is mostly used to play chords and guitar leads while acoustic guitar is used in strumming musical chords to many songs.

When people are deciding what kind of a guitar they should buy, they should not be guided by the shape of the guitar but by the type of music that one intends to play for example, if you want to play rock music then the best choice is an electric guitar but if you want to strum your favorite song you can go for the acoustic guitar. (Millard A. J. 2004, 34-38) Both the guitars are portable but one is more reliable than the other. If you want to go camping then acoustic guitar is the guitar you need.

Another good thing about this guitar is that you can keep up with the times without buying a new guitar because its gadgets can be replaced with more sophisticated ones. (String Letter Publishing, 2000, 59) Acoustic just like eclectic guitars come in different designs for example there are steel strings, classical guitar which has nylon strings and the lap steel guitar and in electric ones we have acoustic electric that is modified with pickups instead of using an extra microphone, hollow bodied, solid bodied and another one with a metal body. 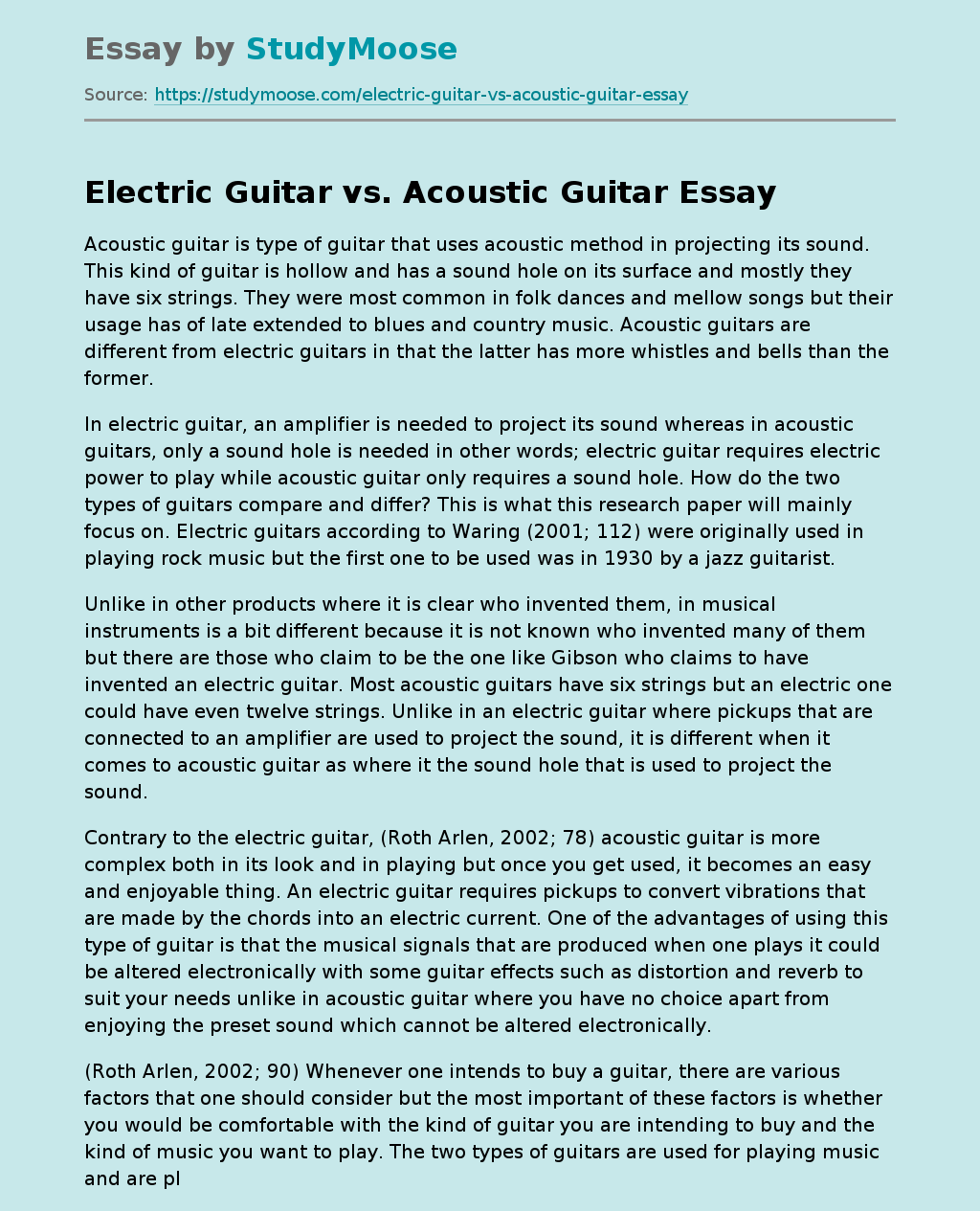