The Physics of a Guitar

The guitar is the most played instrument in the music world. The oldest surviving guitar is thought to be made around 1776 in Italy by Gaetano Vinaccia. Though, the guitar looks like a simple instrument to construct or play there is a lot of physics behind the creation of it, from the strings to the air inside, the anatomy, and the sound spectrum. There are three types of guitars that are made: nylon acoustic, steel-string, and electric. Acoustic guitars produce sound due to a complicated interaction called coupling.

Don't use plagiarized sources. Get your custom essay on
“ The Physics of a Guitar ”
Get custom paper
NEW! smart matching with writer

Coupling refers to the interaction between two or more vibrating elements.

It depends on geometry, sound frequency, and the materials that are used to make it. There are 3 parts to how a guitar works: the strings, body, and the air inside. The pitch of the string vibrating depends in four things. If the strings are the vibration will be slower. The frequency can be changes by string tension by turning the pegs on the guitar.

The body of the guitar is usually made of spruce wood or a light springy wood and it’s about 2. 5 mm thickness. The top plate is made so that it can vibrate up and down easily enough.

Now, the inside of the plate has a series of bridges that strengthen the plate. Those braces will also affect the way in which the top plate vibrates. The air inside of the body of the guitar is important, especially for the lower rang on the instrument. That air is also coupled effectively to the lowest resonance of the top plate. There is something called the Helmholtz resonance, which is due to the air at the sound hole oscillating.

That is driven by the springiness of the air inside of the body. Air is springy, if it’s compressed the pressure increases which can vibrate like a mass on a spring. A guitar’s sound board is the most important element in sound production and displays resonant modes, similar to strings/pipes. Though there are two differences between a guitar & strings/pipes. First, the sound board can be considered 2 dimensional in a guitar, while the other would be 1 dimensional. Second, the frequency of the resonant modes generally does not follow a simple harmonic progression.

To observe the resonance modes of the soundboard there are various ways. Optically: holographic, interferometry, and laser velocimetry which has a laser beam that is reflected off various points on the soundboard. Acoustically, that had an array of microphone or a single microphone while scanning the area that detects various peaks in sound intensity while the guitar is excited. Electronically, it examines the capacitance between a charged plate on the vibrating soundboard and another charged plate held steady. Lastly mechanically, an accelerometer/ velocity transducer with which the mechanically vibrations are measured directly.

Most of the sounds are made of a complicated mixture of vibrations. The sound spectrum is a representation of a sound in the terms of an amount of vibration at each of the individual frequency. It’s presented as a graph of either power or pressure that is a function of frequency. The sound spectra are usually measured using a couple different things. They use a microphone that measures the sound pressure over a certain interval, analogue that is a digital converter which converts this to a series of numbers as a function of time, and a computer which performs a calculation upon those numbers.

The Physics of a Guitar. (2017, Jan 04). Retrieved from http://studymoose.com/the-physics-of-a-guitar-essay 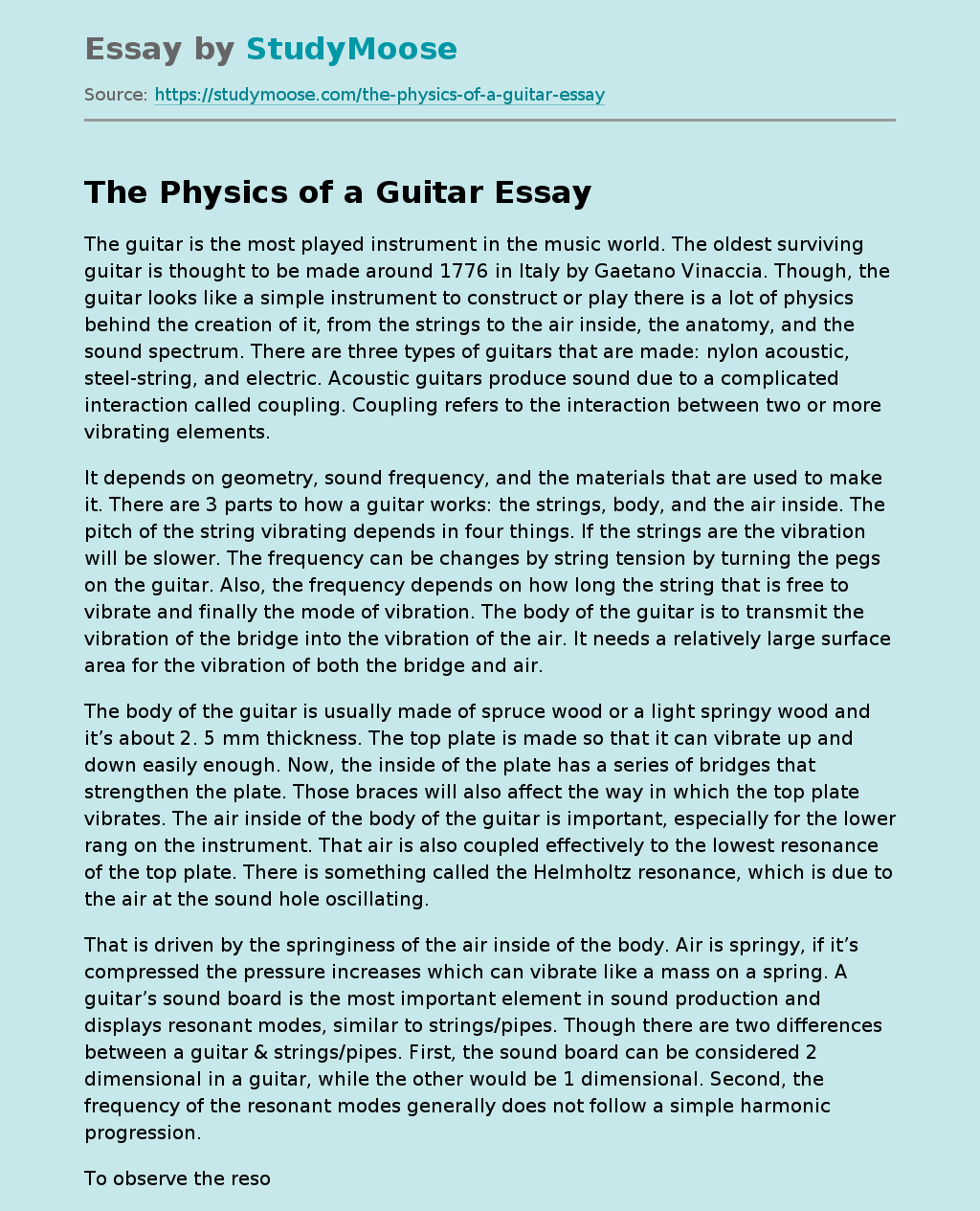