El Cairum/Cairo - the most populated city in Africa

El Cairum or known today as Cairo ranks the most populated city in Africa with the population of 7.8 million and ranked first in the economy in the Middle East. Cairo demonstrates innumerous amount of culture, art, food, newly found sports, and an enrich history throughout its city. It’s known for its tourism, multi-culture, and astonishing city’s sights. Which I found all to be authentically true. If you were to live in Cairo, then first you might notice a significant difference in the climate.

Don't use plagiarized sources. Get your custom essay on
“ El Cairum/Cairo – the most populated city in Africa ”
Get custom paper
NEW! smart matching with writer

First of all, if you’re use to a temperature climate with an average humidity then you’ll surely find a dramatic change in Cairo’s climate.

Cairo’s climate is a desert climate therefore it has extremely dry seasons, very little amount of rain, and high temperature. However, since the city is along the Nile River, it has high humidity, harsh flooding during heavy rainfall, and frequent windstorms. So if you’re not a person who handles heat very well it might not be the place to go to.

Also, it has a rich geography which multiple locations. Cairo is located in Northern Egypt and along the Nile River as stated before but it’s also south of the Mediterranean Sea and west of the Gulf of Suez. At first, Cairo was developing its cities eastern but since they ran out of space to continue western thus having develop an underground water sewage system to feed the western part of the city.

Most skyscrapers are located in the greenish area boarding the Nile River giving it a unique skyline.

Anyhow, since Cairo is a city and is among Africa’s largest city and Egypt’s capital its infrastructure is enormous. It has a well-structure education system with multiple universities including Al Azhar University, Cairo University, American University in Cairo, and Higher Technological Institute. Their healths structure it by far the most advance level of medical care in the country. Also having degrees in medical care in some of the cities’ universities. Transportation in Cairo is also a well built system. With having multiple of transports such as the road network, rail system, subway system, and maritime services.

However it can get overcrowded during rush hour. Moreover, Cairo delivers Egypt’s 90% of overall culture making it the main attraction for tourism. It’s also famous for places like the Cairo Opera House, Khedivial Opera House, Cairo International Film Festival, and the Cairo Geniza. All associated to be over centuries of years old. Thus, making Cairo have a large economy with tourism. So it isn’t hard to find a job in Cairo if you’re ever willing to stay. But if you just dropping by, I suggest you go to the Cairo Tower for the most spectacular view of Cairo or you can drop by one of their tons of mosques or visit the Egyptian Museums. It sure is better than an ordinary test book too. Only thing you might want to look out for in Egypt is the pollution since it’s currently the main issue in Cairo other than that, it’s a great place to visit.

El Cairum/Cairo - the most populated city in Africa. (2016, Mar 08). Retrieved from http://studymoose.com/el-cairumcairo-the-most-populated-city-in-africa-essay 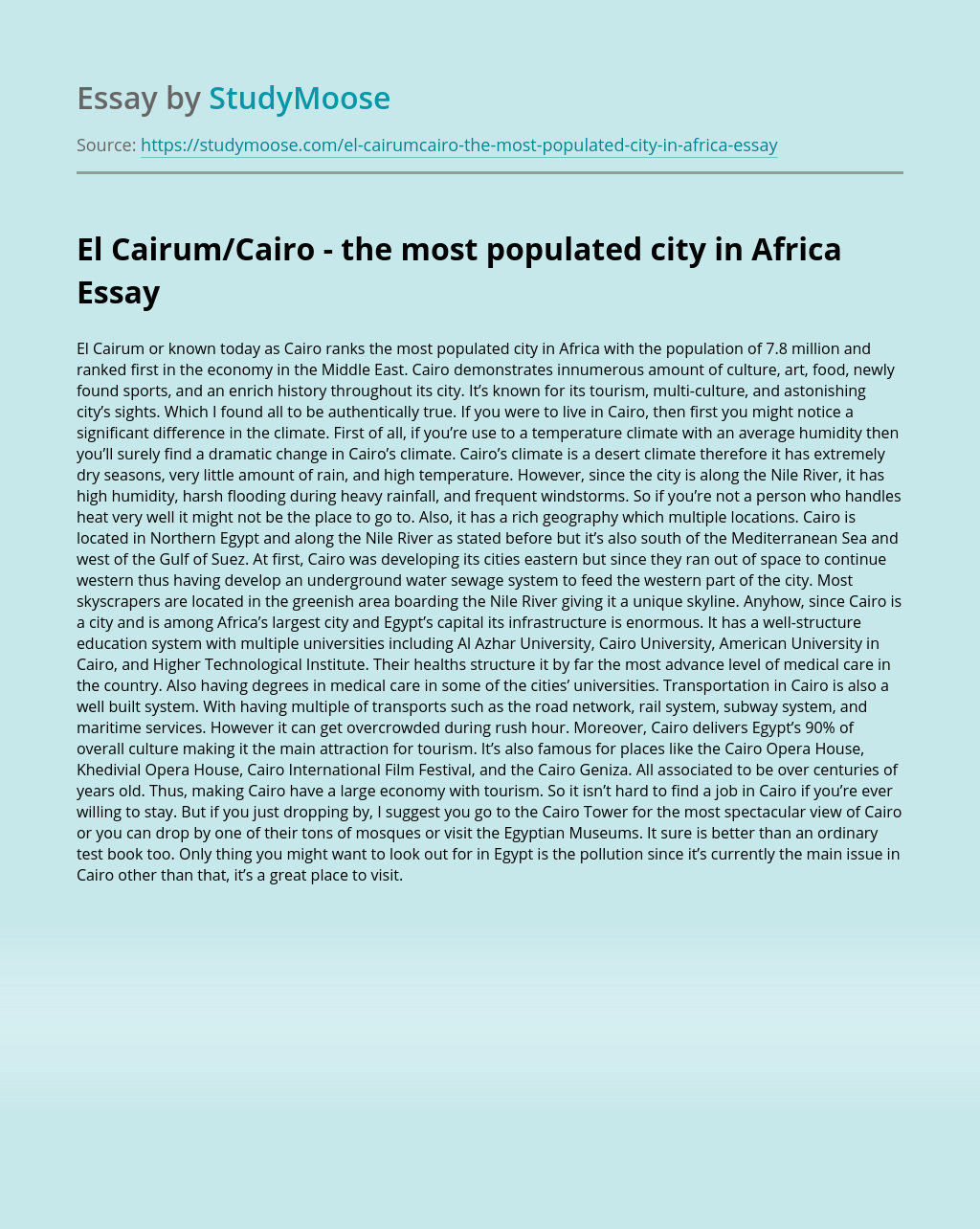