China's Increased influence in Africa, how can Japan learn from it and how Africa can benefit

AbstractChina’s increased participation in Africa’s development over the past decade has been overwhelming, its influence in Africa both politically and economically has put China ahead of its neighbor Japan regarding aid to Africa. Japan spent a total of $460 million in 2011 while China spent $3.17 billion this is according to Japan external organization and China’s government data. While Japanese government strategy for development in Africa has been to eradicate poverty, ensuring zero hunger, provision of health infrastructure, improved education, gender equality and providing clean water, sanitation, clean energy, infrastructure and employment opportunities its counterpart’s strategy has been different and that is to create jobs for Chinese corporations and to advance its low global ambitions.

Don't use plagiarized sources. Get your custom essay on
“ China’s Increased influence in Africa, how can Japan learn from it and how Africa can benefit ”
Get custom paper
NEW! smart matching with writer

It is no surprise that Africa is been called the new and the last frontier for entrepreneurs all over the world not only do we have the youngest population, Africa is blessed with both human and natural resources yet to be tapped. This paper looks at Japan, its involvement in Africa’s development, what the Japanese government can learn from China, improve on it and how Africa can benefit from both countries hustle for the control of Africa.

Keywords: China, Japan, Africa, development, resourcesIntroductionOver the past 2 decades China has continued to establish itself as a major player across the continent of Africa. Historical evidence has shown that there have been economic and political relationships between China and Africa as far back as 500 years ago (Mohan and Kale, 2007). Japan on the other end has for many years been a stable partner for a number of African countries, recently China`s foreign minister Wang Yi and Japan`s prime minister Shinzo Abe both visited Africa while Abe visited Ivory Coast, Mozambique and Ethiopia Wang visited Ethiopia, Djibouti, Ghana and Senegal both trips can be seen as a competition over Africa although both country denies this.

China's Increased influence in Africa, how can Japan learn from it and how Africa can benefit. (2019, Aug 20). Retrieved from https://studymoose.com/chinas-increased-influence-in-africa-how-can-japan-learn-from-it-and-how-africa-can-benefit-essay 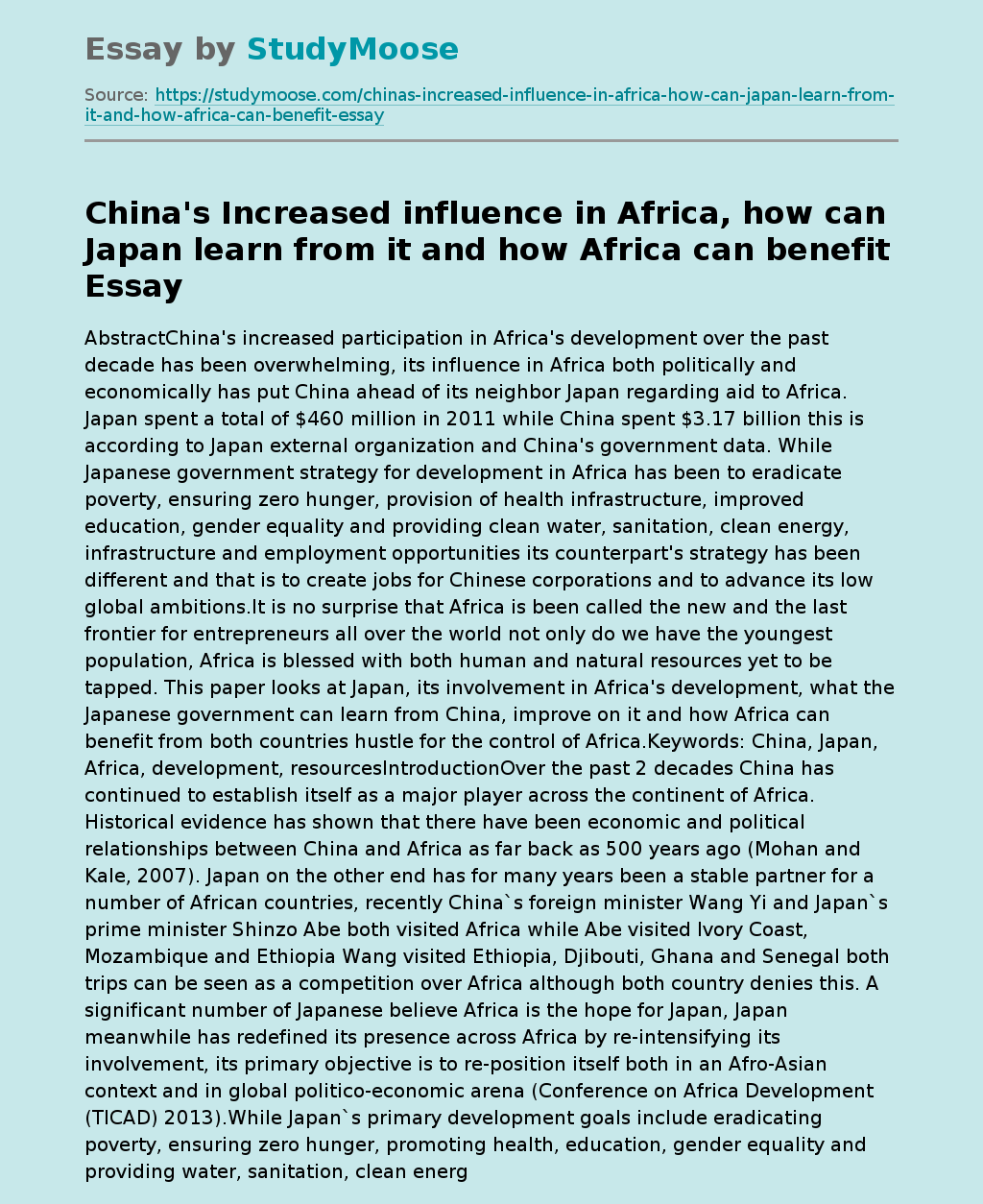