Effects on having a broken family in education

Background of the study

Family is the basic unit of society. It is one of the most essential component of a nation. A home is where a family lives. It may be alternated to the word ‘house’ but a house is more appropriately referring to the material structure, whereas ‘home’ refers to the intangible things that bind together the family members. It is the immeasurable love and care that keeps together the mother, father and their children (Beckford 2010). Children from broken families are nearly five times more likely to suffer mental troubles than those whose parents stay together.

Don't use plagiarized sources. Get your custom essay on
“ Effects on having a broken family in education ”
Get custom paper
NEW! smart matching with writer

According to Dounghty, (2008), it also showed that two parents are much better than one if children are to avoid slipping into emotional distress and anti-social behavior and also looked at conduct disorders which result in aggressive, violent or anti-social behavior.

Children whose parents split in this generation are more than four and a half times more-likely to have developed an emotional disorder than one whose parents stayed together.

Several findings said that children’s family backgrounds are as important – if not more so – than whether their home is poor, workless, has bad health, or has no one with any educational qualifications. The effects, however, are more focused on the children. Premarital sexual activities is one of the major effects of splitting of families, sometimes with only one parent guiding, the child has more chance of rebelling against his/her parent. Also, increase in financial problem, hatred and anger builds up from families who experience distraught in their relationships.

Education is also an area wherein stark differences in the outcomes for those who had been in a broken home are created. According to Lann (2010) for 18- to 24-year-olds, 62 per cent of those who experienced parental divorce/separation during their childhood completed 12 years of education compared with 77 per cent of those whose parents did not. Hence, this study was conducted in the College of Computing Education Department in University of Mindanao in order to evaluate the effects and to determine what student do to lessen the suffering of having a broken family, and how to overcome the effects on their academic performance.

The concept of effects of having a broken family. According to glenn (2010) broken family varies from numerous reasons why it had to be that way. But usually, misunderstanding starts from simple domestic quarrel that grows impertinently damaging the long-forged relationship between the family members. When a couple split up, it is the children that are greatly affected scarring them physically, emotionally and socially. Marla (2014) says broken family students failed to handle the curriculum. This failure includes various aspects of educational failure such as rebellion, frequent absence from classes, dropping out and many more. Studies have shown that people shown that people with academic failure are more probable to rebel and use drugs at older ages; therefore, academic failure and dropout might result to rebellion, drug, and alcohol addictions.

Living in single parent is difficult because there’s a need of love, care, and fulfilment of the duty of both parents. If the role of each parent is broken it will damage and have a great impact to the student, on how will the student live with it. If one of the parent will left due of miss understanding circumstances and will lead to divorce households and responsibilities there is an effect to the relationship to other member of family. If that’s the case, it will depend to the children and parent who take care of the child if managing a households and responsibilities will reflect a positive or negative outcomes in their situation.

The results of this study is beneficial to the students who encounter this situation and for those who criticize and oppress them in terms of bullying, and for teachers to understand the problems that each student facing in their daily lives and to determine a better solution or comfort for those students encountering who have been in burden and advices from those who have suffered but found a way to lessen the burden. It could also help the society to have a better understanding on the norm who are suffering from a broken family

The study will be concentrated on the students of the College of Computing Education Department. The data will be gathered using questionnaire method and will be conducted at The University of Mindanao Matina Campus, Davao City. The questioning will be performed on the convenience of the students. The respondents will be chosen according to the referrals of the previous respondent. It is also limited because of the sensitiveness and confidentiality of our respondents.

Family – a group of people united by certain convictions or a common affiliation. Household – consists of one or more people who live in the same dwelling and also share at meals or living accommodation, and may consist of a single family or some other grouping of people. Broken Families – a broken family consists of a biological family that has separated for specific reasons that may result in single-parent families, stepfamilies or blended families.

Effects on having a broken family in education. (2016, May 05). Retrieved from https://studymoose.com/effects-on-having-a-broken-family-in-education-essay 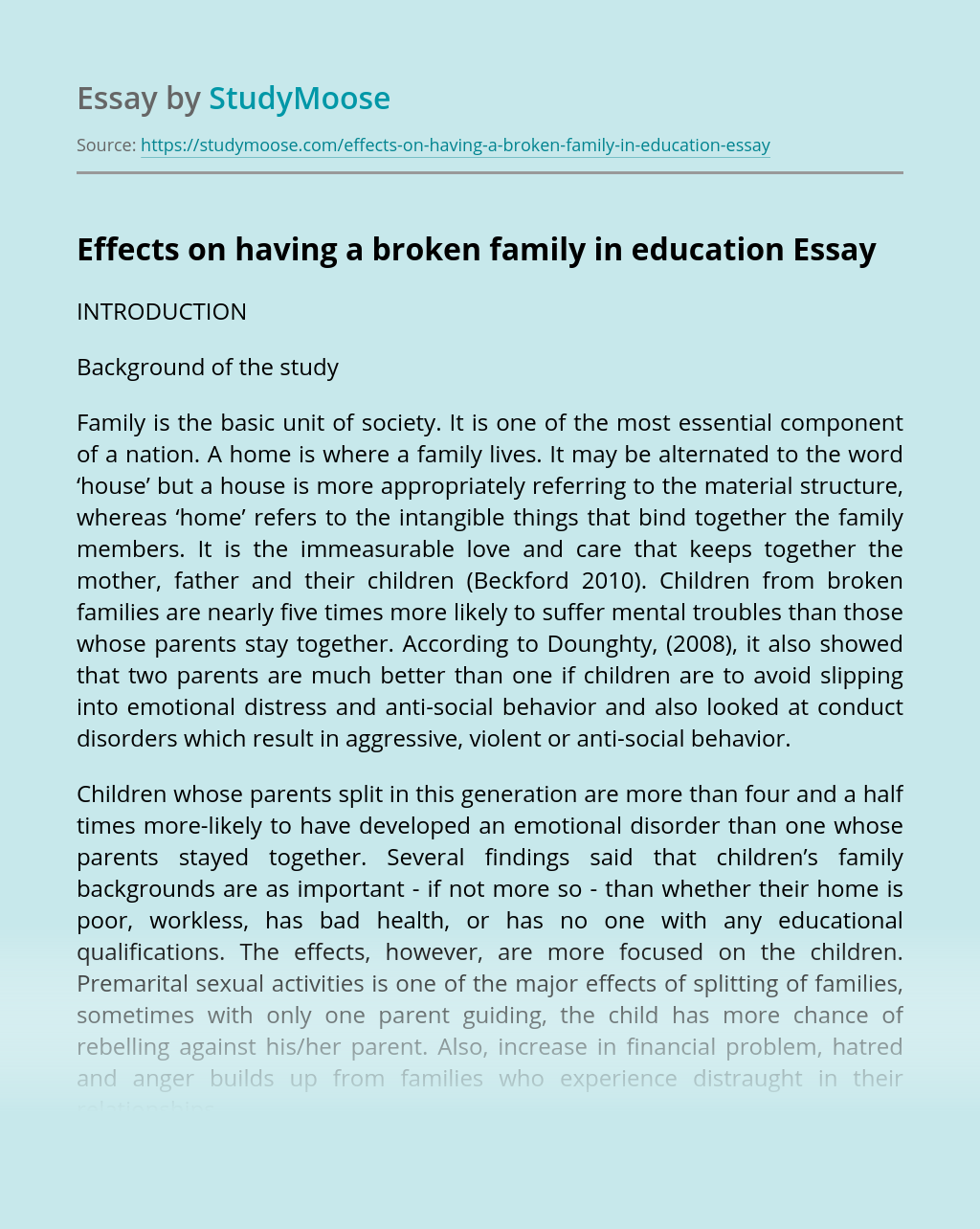