Effects of pH on Amylase Activity

Abstract: Amylase is an important enzyme in the human body as it allows for the consumption of starch by breaking the polysaccharide down into maltose units. All enzymes, including amylase, function best at a certain optimal pH. Therefore, in this experiment, the effect of different pHs on the reaction rate of amylase is studied. It was hypothesized that the amylase-starch reaction would proceed fastest at a pH closest to that of the body, or 7.0, since that is where the enzyme normally functions.

Lower and higher pHs would cause the enzyme reaction to proceed slower. In order to test the hypotheses, several reactions of amylase and starch solutions with varying pHs were set up. The addition of the mixture to an iodine solution allowed us to track the process of the reactions since starch interacts with iodine to form a brown/black color while the iodine remains golden-yellow in a solution where all the starch is broken down in to maltose by the amylase.

It was found that the reaction at pH 7.0 occurred the fastest and the reactions at pHs higher and lower than 7.0 occurred slower. It was concluded that amylase has an optimal pH of 7.0. At pH’s other than this, the enzyme will not work as proficiently. Therefore, it was found pH plays a significant role on enzymes.

Introduction: Enzymes are very important macromolecules made out of protein. They are able to catalyze reactions in the body, meaning that they lower the activation energy of reactions and allow them to proceed without being consumed in the reaction itself.

This is important because when the activation energy is lowered for a particular reaction, the reaction is able to happen more quickly. Without these crucial macromolecules, organisms would not be able to function very efficiently and reactions would take an extremely long time to happen.

In order to catalyze reactions, the substrate, the reactant the enzyme performs on, must first bind to a specific area on the enzyme called the active site. It is currently believed that there are several different methods in which an enzyme lowers the activation energy of a reaction and therefore speeds up the process. To begin with, by binding with the substrates, the enzyme is able to bring the different reactions closer together, making it easier for a reaction between them to occur. In addition, sometimes the enzyme changes its shape around the substrate in an induced fit in order to stretch or bring out certain groups on the substrate. This makes it easier for the enzyme to catalyze a reaction. Sometimes, the active site even participates directly in the reaction between reactants by creating brief covalent bonds between the enzyme and its substrate. Each enzyme has a specific amino acid sequence. This sequence allows the protein to fold in a very specific three-dimensional configuration. This structure must be very precise or the substrate will not be able to bind on the active site. This is an example of how the structure of a system ultimately influences its function. pH affects molecular structures of proteins through the manipulation of bonds within the amino acids.

This rearrangement of bonds ultimately affects the charge of the molecules, therefore shifting the molecules and as an end result altering the shape of the enzyme. Amylase is studied in this experiment. This enzyme helps digest carbohydrates; in particular, it hydrolyzes starch into its constituent glucose units. In humans, this enzyme is produced in the pancreas and the salivary glands. Amylase has been classified into three main categories: -amylase, -amylase, and -amylase. In addition, this enzyme is very important in bread making and alcohol fermentation as it breaks down starch into simple sugars, called maltose, which yeast can then digest. This study is very relevant because all organisms participate in activities every day that require enzymes to catalyze reactions. Without these enzymes, metabolism pathways would be very inefficient and difficult and many reactions would take indefinitely long to occur. Amylase is also a very important enzyme to any organism that ingests starch. Without it, organisms would not be able to utilize the energy in food consumed.

It is important to study the effect of pH on enzyme activity so it can be learned when amylase will function with maximum efficiency. In this experiment, the effect of five different pH’s (5.0, 6.0, 7.0, 8.0, and 9.0) on the efficiency of an amylase reaction with a starch solution was tested in order to study the general pattern of enzyme efficiency as a result of the pH of the environment. It was hypothesized that the optimal pH will be 7.0 because amylase is generally found in saliva of many animals, and it would therefore make sense for the enzyme to function best at the typical pH of those organisms, which is around 7.0. If amylase was placed at pH 7.0, then the rate of starch disappearance would be greater than that of the reaction at pH of 5.0 and 9.0. Because increasing pH, up to the optimal pH, generally causes a faster reaction, it was also expected that the reaction occurring in the solution with pH 6.0 would occur faster than the reaction in the 5.0 pH environment.

Materials and Methods: This experiment required the use of 1% amylase solution, 1% starch solution, five standard test tubes, several 12-well test plates, 2mL and 5mL pipettes with their corresponding pipette pumps, I2KI solution, DI water, and five buffer solutions with pH’s of 5.0, 6.0, 7.0, 8.0, and 9.0. The five test tubes were labeled 5-9, inclusive, in order to differentiate the five different pH buffers. A 5-mL graduated pipette was used to add 5 mL of appropriate buffer to each respective test tube. 1.5 mL of 1% amylase solution was then pipetted into each test tube. These test tubes were then put aside and each compartment of several test plates was filled with two drops of I2KI solution. 2.5 mL of 1% starch solution was added to the test tube containing the 5.0 pH buffer and amylase. A drop of the resulting solution was added into a compartment on the test plate and recorded as time zero. A drop of the solution was added to a new compartment every 10 seconds until the solution in the compartment no longer changed color. This process was then repeated with the remaining buffer solutions. If after 7 minutes, the reaction color was still not the same as the initial I2KI color, then it was concluded that the reaction appeared to be making no progress and was therefore aborted. If the reaction appeared to be making progress and was continuing to make a color change, the reaction was continued until completion. All data and observations were recorded.

Graph 1. The Effect of Temperature on Amylase-Starch Reaction Time. The following graph shows the effect of different pHs on the speed of reactions between starch solutions and amylase solutions. The data was obtained through an experiment in which several starch-amylase reactions were placed in environments of different pH’s and the speed at which the reaction occurred was recorded. Discussion: It was predicted that the reaction between the starch and amylase solution occurring in the 7.0 pH environment would occur the quickest because that is the environment that amylase normally functions in. It was also predicted that the enzyme would function slower in pH’s both lower and higher than 7.0. The results of this experiment supported the hypotheses that had been made (stated above). The optimal pH of an enzyme varies depending on where it is normally found. Amylase is found in saliva, which has a pH range from slightly acidic (6.0) to neutral (7.0). Amylase enzymes are proteins made up of amino acids.

Because pH affects the molecular structure of proteins through the making and breaking of bonds, if amylase is placed in a strongly acidic or strongly basic solution, its molecules would lose or gain electrons or protons which affects structure and charge of the amino acids, and hence can influence structure and function of an enzyme. At pHs higher and lower than that of the optimal point, the structure of amylase begins to straighten out due to the lack of bonds and the shape of the active site becomes distorted, making it difficult for the substrate to bind. When the pH reaches a certain high or low point, the structure of the enzyme completely transforms which causes it to denature.

Therefore, to a point (to be discussed in more detail below) increasing pH will cause substrates to bind to active sites more frequently. This relationship can be seen as the pH of the reaction increases from 5.0 to 7.0, the reaction rate increases. In this particular experiment, the reaction between starch and amylase that occurred in the 5.0 environment finished in 2.11 minutes, while the reaction that took place at 6.00 took 1.56 minutes to complete, and then the reaction that took place at 7.00 took 1.32 minutes to complete. This data is very consistent to the idea that points leading up to the optimal pH will show an increase in enzyme efficiency. The data also shows that at points above the optimal pH, the basicity will disrupt the structure of the enzyme, decreasing efficiency and resulting in an ultimately slower reaction rate, or a greater reaction time.

The reaction time at pH 9.0 (2.16 min) is greater than that of 8.0 (1.57 min) which is also greater than that of 7.0. In conclusion, our hypothesis was supported because it was found that pH 7.0 is the optimal temperature for the enzyme amylase and pHs lower or higher than that would result in slower reaction rates. It was noticed that the graph of Time of Reaction Completions vs. pH was not entirely symmetrical. The reaction rates of the more acidic pHs are seen to be slightly faster than those of the basic pHs however, this actually could have been expected because of the fact that the normal pH of saliva is also slightly acidic.

Effects of pH on Amylase Activity. (2016, May 08). Retrieved from http://studymoose.com/effects-of-ph-on-amylase-activity-essay 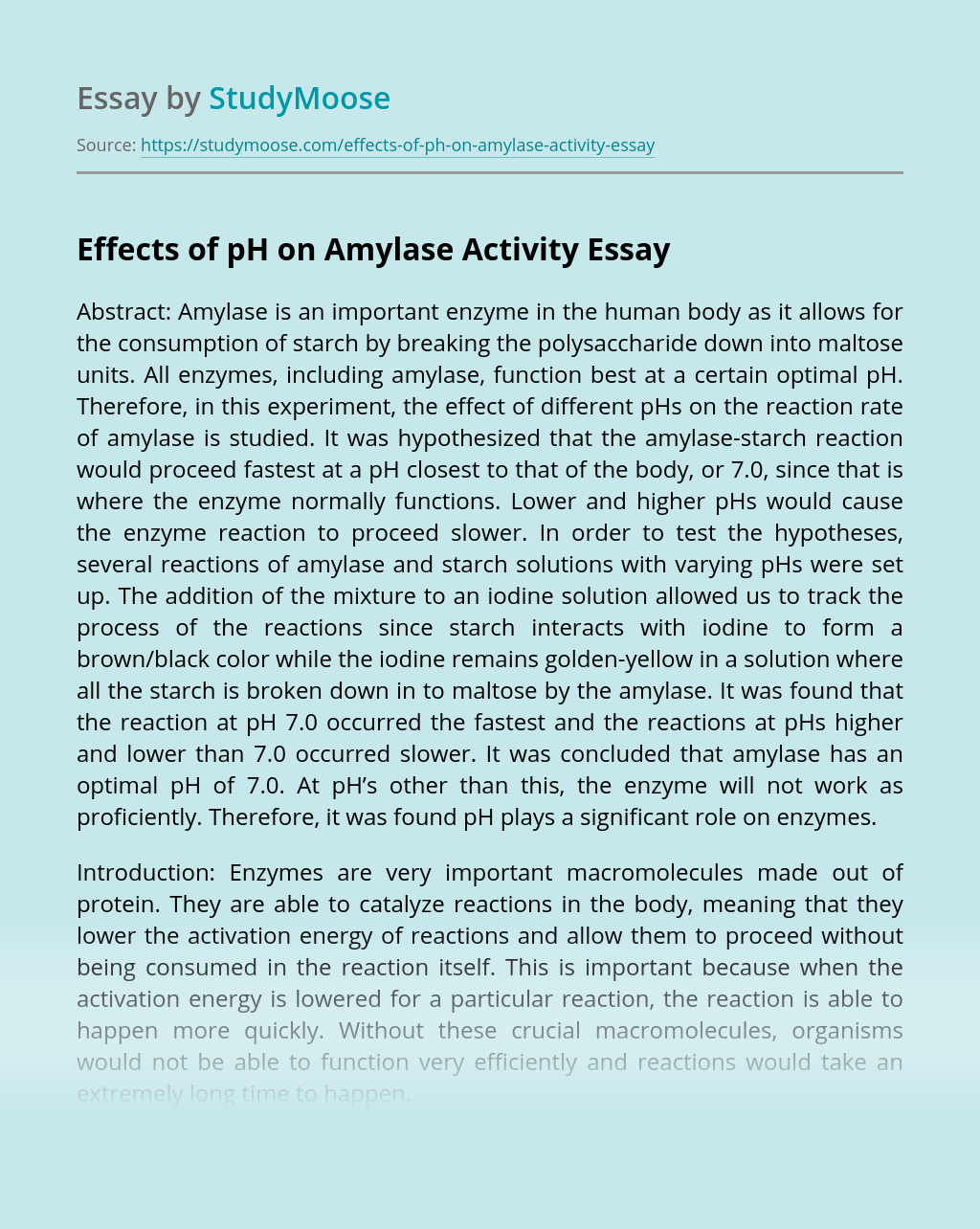 Don’t waste time
Get a verified writer to help you with Effects of pH on Amylase Activity
Hire verified writer
$35.80 for a 2-page paper
Stay Safe, Stay Original