Effect Of Personality On Effective Communication

Psychologists have come up with different definitions as far as personality is concerned. However, most of them tend to agree to the fact that, personality is the individual’s unique pattern of thoughts, patterns of thought, feelings and behavior that tend to persist over time and situation, (Morris & Meistos 1998p 442). Accordingly, Morris and Meistos have found out that personality as described in the above definition has two parts, that is, it is a unique pattern of an individual- those tenets that isolate or tell an individual from another.

Don't use plagiarized sources. Get your custom essay on
“ Effect Of Personality On Effective Communication ”
Get custom paper
NEW! smart matching with writer

Secondly, that personality has a spell, that is, they persist through time and across situations. The last example simply means that personality is stable and enduring. According to James Kalat, in his introduction to psychology, the word personality has been derived from the Latin word persona which means ‘masking’, (Kalat, 1990 p 467). It traces its roots from the theatres of ancient Greek and Rome where actors wore masks to indicate their emotions- whether they were happy, sad or even angry.

The use of the word personality, however, has a totally different meaning from the word mask. According to James Kalat (1990), a mask can be put and be removed again after the play, but personality as we saw in the definition above, indicates something stable and enduring. Personality also consists all consistent ways in which the behavior of one person differs markedly from that of another person. Of the several psychologists who have wrote about personality, Sigmund Freud (1856- 1939) and Karl Jung are the most notables ones.

James Kalat (1990) has found that this aspect from the Freudian theory is very vital for the establishment of a full individual. Therefore according to him the way we communicate, address others and general relationship are determined from innate by our personality. Morris and Meisto, in their psychology an introduction have found that Carl Jung, who was a student of Freud, had a different direction as far as personality is concerned, (Morris & Meistos 1998, p 442).

According to them, although the two believed in the role of unconscious in determining human behavior, Jung fell out with Freud’s view that the Id is the desire for sexual excitement which is led by the ego, Jung emphasized that the unconscious is the source of strength vitality manifested by the ego, (Morris, Maisto 1998, p 447). Further, Jung emphasized that the unconscious part of personality can break down into the personal unconscious and the collective unconscious. Therefore, according to James and Maistos (1998), personality can be said to control the whole individual.

Patterns of life which include behavior, emotions, and communicational aspects such as speaking, listening, hearing and noise are all manifestations of personality. Communication, as has been found by James (1990), relates directly with personality of an in the sense that it is a process in which one has to hear and understand the views and ideas of another. In most cases emotions are aroused in the course of communication process. Emotions here can mean that the whole process can make one happy or sad, delighted or anxious,

A good example of a communication process in which emotions take a centre stage is this extract taken from a play by this Nigerian play writer, Wole Soyinka in his 1965 play, the Road. Salubi: Six o’clock I bet. I don’t know how it is, but no matter when I go to sleep I wake up it strikes six. Now that is a miracle. Samson: There is miracle somewhere but not what you say. Maybe the sight of you using the chewing stick Salubi: Look Samson, it’s early in the morning. Go back to sleep if you are going to start again. (He starts to put his chauffeur’s uniform).

Samson: Who lend you uniform? Salubi: I buy it with my own money. (Samson goes over, feels the cloth). Samson: second hand! Salubi: so what? Samson: at least you might have washed it. Look at that blood stain- has someone smashed your teeth? Salubi: rubbish, no washing powder. Samson: all right, all right. But you are a funny person. Funny like those street idiots. How can anyone buy uniform when he hasn’t got a job? Salubi: impression. I take uniform to impress all future employers. Samson: With that smear on the front?

Salubi: (angrily going over to Samson) Go mind your own business you jobless tout. ( Qtd Soyinga . W, 1956 PP 2-3) In such a conversation with the likes of Samson no meaningful understanding can take place. There is evidence of personality with Samson seemingly proud lounging his attack on the seemingly low status of the colleague. Eventually, a misunderstanding is evident, and finally they a break out. For an individual who always has a good self impression, and is normally confident and assured, may be quite insecure in particular one to one.

This means that effective passage of the message might not eventually take place. Persons introduced to celebrities have been known to stutter, flutter or be struck dumb. An individual engaged in a two person colloquy must actually reckon with several images. First, he sees himself as he feels he is. He also feels himself as he wishes the other would see him. And finally he sees himself as he suspects the other person really does see him, (Abernathy, 1959 p 7). To illustrate the foregoing, suppose you as a student go to see one of your favorite teachers.

You see yourself as somewhat better-the-average students, though you are sure how well you are mastering this particular subject. Meanwhile you dream of being a superstar student that your instructor will automatically think of you when matter of special awards is mentioned. Also, however from the tone of one or two comments he has made fear that the teacher sees as quite deficient. This suspicion bothers you a great deal as you prepare to talk to him. When there is a wide gap between these images tension develops, and most likely a healthy and meaningful conversation will be affected.

The hearing and listening aspects of communication are interfered with just because of anxiety and tension grip, (Abernathy, 1959 p 8). A young man or woman prepared to meet an individual, whether or not in position of authority, have always had tension because of the way they perceive this individual and also their personality. Adults should in essence be made to understand that their personality affects the way they are perceived by the young generation. You can imagine you being addressed by an individual with a distorted personality like in the case of Samson above.

Personality in essence affects all aspects of communication, but most important listening and hearing. Furthermore, if our adults understood the personality of the young generation they are required to be addressing, for example, they should know the relevant information to relay to the teenagers. Ever heard of the generational gap! Difference arising in the way the younger generation comes to understand the older generation is actually vested in the personality as expressed by the two generations.It is helpful that in future adults should understand us! ( Abernathy, 1959 p 10)

Effect Of Personality On Effective Communication. (2017, Jan 25). Retrieved from https://studymoose.com/effect-of-personality-on-effective-communication-essay 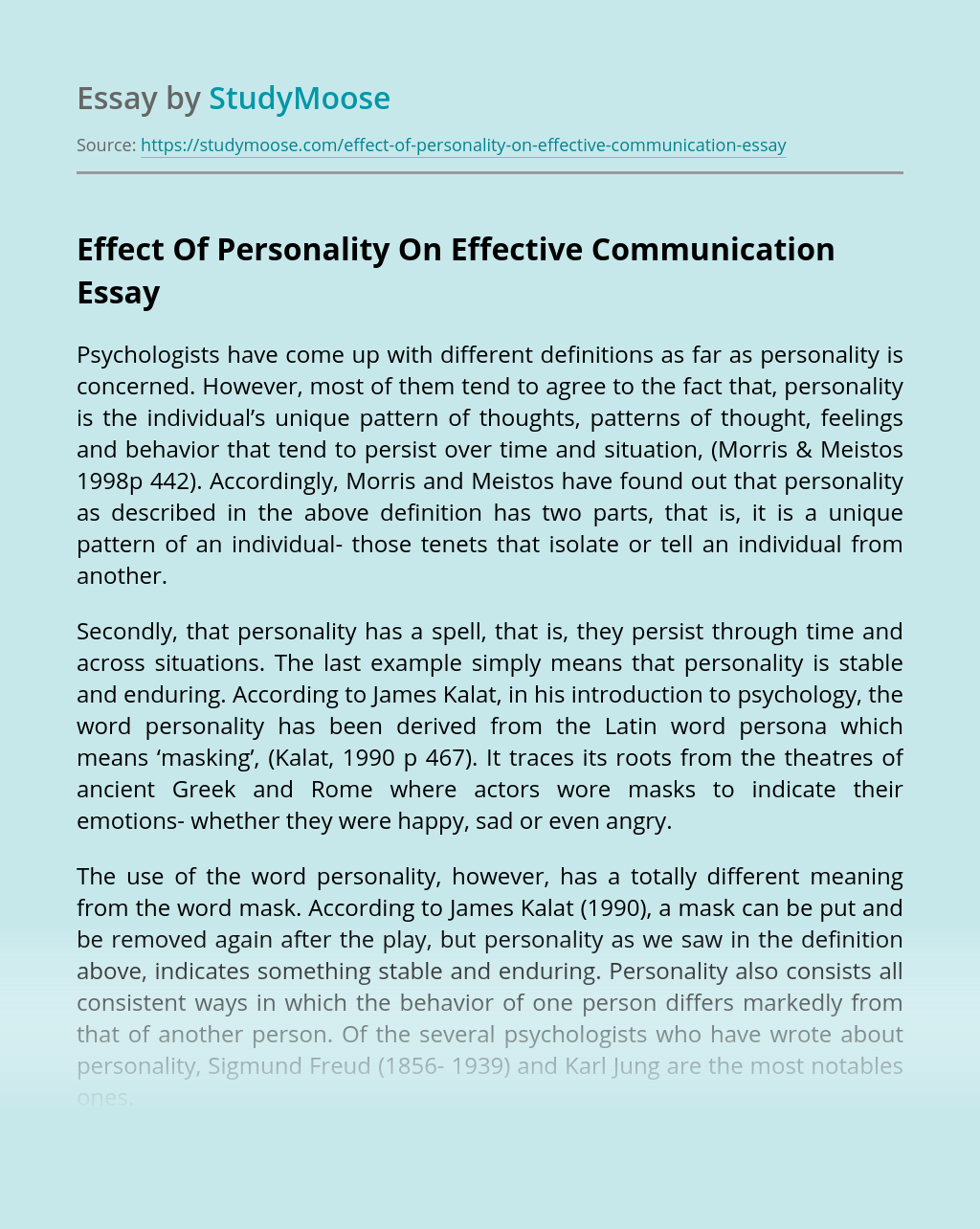