Education system between Romania and UK

Nowadays an important and discussed issue by all countries is the education system. In many countries from year to year politician try to make changes in order to improve it. However, it happens that instead of improve it the system become more complicated and corrupted. In some countries is believed that is better to learn everything by heart but in others the practical part and students opinion is more important. Hence this essay is going to discuss the main differences and similarities between Romanian and United Kingdom education system.

Don't use plagiarized sources.
Get Your Custom Essay on Education system between Romania and UK Just from $13,9/Page

Although Romania and the UK have very different education systems there can be found some similarities. The age required to attend school is similar; in Romania six or seven and in UK six years old. In both countries primary and secondary schools are compulsory. Furthermore, in Romania as in the UK at the age of five-teen pupils have to pass an exam in order to follow further education, preparing them for university.

The age required to enter the university in Romania is exactly the same as the one in UK, eight-teen or over.

UK has the same three years of study in higher-education, just like Romania. In Romania as in the UK, in higher education, students have a number of credits they have to achieve along the academic year and there are also examinations periods: one in semester one and one in semester two. Both countries offer students the chance to choose from a variety of courses. Some of the courses are compulsory and vary from school to school while others optional and each student can choose which ones to take.

Important differences can be noticed between this two countries education system. In the UK is applied an interactive and efficient method of teaching, that is not applied in Romania, which encourages students to express themselves freely and participate to courses. The compulsory education of these two countries is different. The Romanian compulsory education last for ten years while the one from the UK for eleven years. Children start school at the age of six or seven and follow the primary school, eight years. They have to take an examination at the end of primary school called the National Exam, based on assessments throughout the last four years. Based on their results they go to secondary school (high school) which last four years but first two are compulsory. However, students have to complete all four year in order to apply for higher education.

At the end of secondary school students must submit the Romanian Baccalaureate exam form by an oral and written examination. Compared to Romania where the statutory schooling age is from six to eight-teen (if you want to follow a university after the secondary education) in the UK is from five to six-teen. The UK education system is divided in four Key Stages and pupils are assessed at the end of each stage. At the end of Key Stage Four pupils have to achieve General Certificate of Secondary Education (GCSE) in order to continue with further education. If they decide to follow a higher education they have to follow a further course at the end of which they have to achieve the GCE A-level (General Certificate of Education Advanced Level). From the financial point of view the education in the UK is far more expensive than in Romania. For example one year of university in UK is 3,075£ whereas in Romania is only 420£.

The length of a master degree is of two years in Romania while in the UK it takes only one year. Moreover, UK students are encouraged to follow further education, although is expensive, because the government supports the students (for example students can apply for a student loan). By contrast, in Romania there are governmental funded universities, where students are admitted if they pass the admission exam with a high grade. The government funded slots are limited and are allocated to students according to their results. Furthermore another difference can be easily noticed in the marking system.

In Romania compared to the UK, where the marking system is formed by letters (A* to G) or percentages, the grades are numbers and are from one to ten. Ten is the equivalent for A* or 100%. Moreover, Romania and the UK differ with regard to the policy of plagiarism. The rate of plagiarism is very high in Romania even among higher-education institutions because of the corrupted educational system. A considerable number of educational staff accept bribe because they are unsatisfied by their wages and work condition. (http://www.direct.gov.uk/en/index.htm,http://www.edu.ro,

To summarize, the major similarities and differences between Romanian and United Kingdom education systems are the one regarding compulsory education, marking system, qualification, structure of schooling year, the cost of studying, plagiarism and courses in higher-education. Many Romanians say that Romanian education system is better than others countries because students learn more things at a higher level. But what matters the most: the quantity or the quality? Is it better to learn more and forget everything in two days or is better to learn useful things for everyday life and forever? The answer of these questions depends from person to person, and only those we studied in both system can realize the advantages and disadvantages of these two education systems.

Education system between Romania and UK. (2016, Jul 31). Retrieved from https://studymoose.com/education-system-between-romania-and-uk-essay 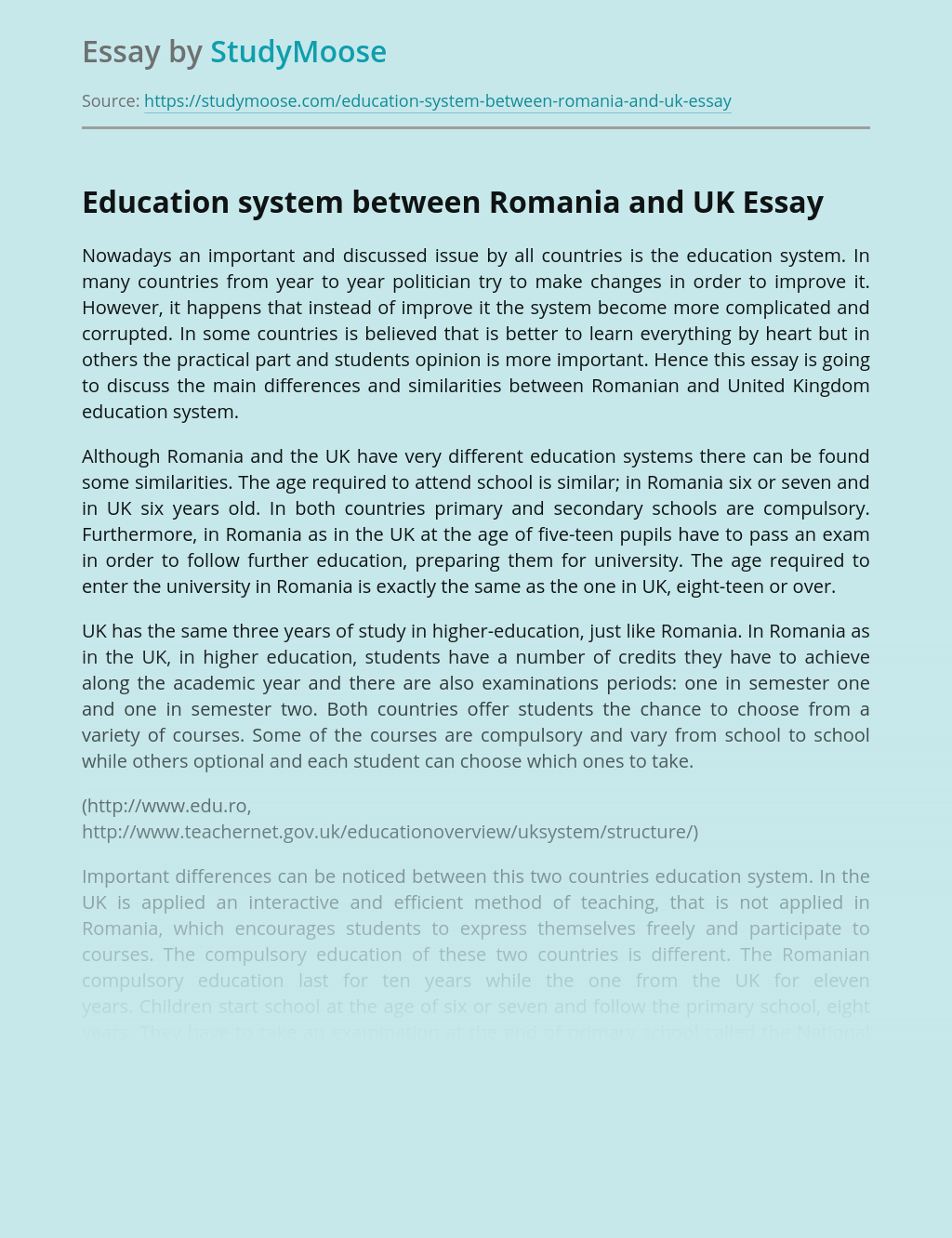 Early childhood education is important because it represents the fast growth in the learning ability during the first five years of life. During these years, the child starts his or her cognitive, social, emotional and physical development and often changing teachers has a negative impact on it. This study was intended to understand the turnover...

Get Essay
Should Computers Can Replace Teachers

Today computers are used in almost every field. Whether we want to book tickets, to maintain accounts or communicate with each other – computers are there to answer our every need. So we see that computers are slowly replacing human beings at work. Particularly, there are some aspects of the educational system are already provided...

The Value of Liberal Arts Education

The great physicist Albert Einstein once said, “The value of education in a liberal arts college is not the learning of many facts, but the training of the mind to think something that cannot be learned from textbooks.” Einstein further conveys that liberal studying helps develop critical thinking and analytical skills with a touch of...

How i learn best

Don Harold, an American writer, once wrote, “The brighter you are, the more you have to learn”. I strongly believe in this statement because knowledge will help us to succeed in life. Every day we are learning new things, but sometimes learning can be very difficult. Learning can be made easier through various ways; though...