Education Is the Main Agent of Secondary Socialisation

Secondary socialisation is an ongoing process which occurs when a child leaves a family environment and continues learning how to live as a member of society. There is always an influence to help carry out this process, this is known as an agent of socialisation. The perfect example of an agent of secondary socialisation is Education, more precisely, school. At school, the student continues learning that which they started learning at home. The aim of education is for the individual to learn how to behave in certain situations and places.

Don't use plagiarized sources.
Get Your Custom Essay on Education Is the Main Agent of Secondary Socialisation Just from $13,9/Page

One of the main aims of education in schools is the preparation for the world of work, one of the most predominant aspects of social life. Functionalists view the positive aspects when it comes to education’s contribution to society as a whole. Functionalists view education as meritocratic, stating that it is a system which is fair on everyone. They attribute intelligence and effort as being the keys to success.

Parsons, a functionalist, says that schools are a major tool when it comes to role allocation.

He views education as being important when selecting the future roles of individuals in society. In his own words, he states that an educational system ‘’functions to allocate these human resources within the role-structure of adult society’. Parsons therefore concludes that schools test the student while also evaluates them, to give a suitable job based upon the talents and skills that the student has. Parsons view regarding the values transmitted may not have been that of society as a whole, but perhaps as a ruling minority. Something which Parsons has been criticised for. His view upon schools being a meritocratic system was also questioned. Meanwhile, another functionalist, Durkheim, says that schools are society in miniature which is modelled after the social system.

Same as in society, in school, an individual has to abide by a certain set of rules which in turn prepares the student for interaction with the members of society as a whole. Durkheim believes that the rules should be enforced and also punishments should be given to reflect the offence’s seriousness. This being done as a lesson for pupils to act in favour of the interests of society as a whole and also learning to exercise self-discipline in the process. Durkheim also claims that the students learn specific skills which are important for their future occupation, saying that this is important due to the increasing specialisation of labour. Durkheim is criticized for her descriptions of how schools act, with some researchers questioning this.

David Hargreaves says that education in modern Britain fails to promote self-discipline. Bowles and Gintis, Marxist economists, do not agree with the Functionalists in their view that education is meritocratic. They believe that achievement can be influenced by the class background, citing this influence as the most important one, claiming that there is no such thing as equality. Despite education being open to all, they claim that some have more opportunities than others. Children who are of wealthier and more powerful backgrounds tend to have higher qualifications and more respectable jobs, without any reference to their abilities.

Bowles and Gintis say that this is disguised by a myth of meritocracy done by the educational system. Those who do not have access to success do not blame the system which has forced them to fail, but blame themselves. Their views are criticised for claims regarding how the student’s personalities are shaped because of the school. No matter what kind of view or perspective is presented regarding the subject of education, it is quite obvious that education or school is one of the main agents of socialisation because we can say that school regulations are similar to those we find in the work place. Therefore the student learns norms and values that are expected in society.

Education Is the Main Agent of Secondary Socialisation. (2016, Nov 10). Retrieved from https://studymoose.com/education-is-the-main-agent-of-secondary-socialisation-essay 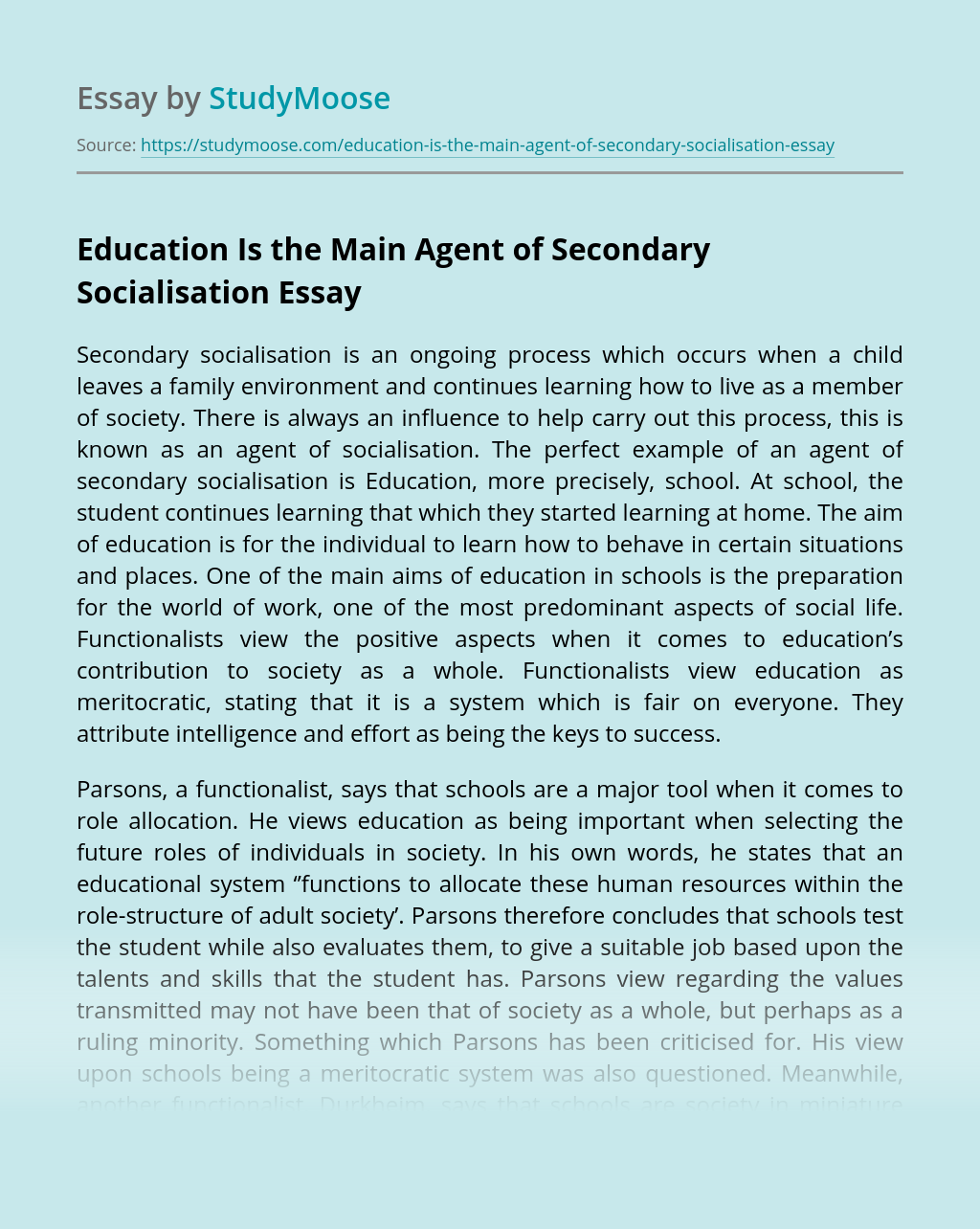 My Teacher Has a Big Influence on My Life

One day I was sitting in my math class, feeling bored and sleepy, when my teacher, Mr. .Ahmed woke me up by his words.He told us his story aboutmath and how his life changed after he changed his way of thinking. He also told us that he used to hate math, but he became good...

Academic dishonesty is a vice that is plaguing higher education in today’s society. While lecturers and exam invigilators always seem to be a step behind in catching the culprits, the techniques being invented by the students to beat the system can almost be viewed with grim fascination. The emphasis that has been put on higher...

Get Essay
Cerebral Lateralization and Functionality

There are several methods for studying cerebral lateralization; four methods in the forefront are the study of unilateral lesions, sodium amytal, dichotic listening, and functional brain imaging. The traditional method for studying cerebral lateralization is unilateral lesions study, which is the study of the location and effect lesions have on the brain and body functionality....

For the sake of providing the best services to their students, English teachers arrange their English language teaching and learning activities as perfect as possible. They spend most of the time to make preparation for their teaching. However, along with the process of such preparation, they sometimes do not consider the importance of also preparing...