Much to the amazement of political scientists and economists, globalization created an offspring. Regionalism is becoming more and more a defining feature of the international system; it is the identity of a coherent and logical region created through the intricacies of integrating economic, legal, political, and social factors. It is an offspring of globalization in to respects. First, globalization is generated after all generalized factors are incorporated into one model of development (this is though debatable since globalization is not merely a model, but an effect of past attempted economic and political integrations).

Don't use plagiarized sources. Get your custom essay on
“ East Asian regionalism ”
Get custom paper
NEW! smart matching with writer

One can categorize regionalism as a subset of globalization; that is, the existence of specialized regions around the world only proves that globalization is a reality. The second and most controversial aspect of regionalism lies in the effect nature of globalization. Professor Huntington argued that globalization creates a situation where the state becomes “hollowed”; this “hollowing of the state” becomes evident in the economic field. A single country cannot impose regulations, say, on the price of oil, without the approval of other involved countries.

In simple terms, globalization and regionalism degrade the economic sovereignty of countries. Countries then are forced to form alliances in order to compensate for the loss of economic sovereignty. Hence, it is possible that a group of countries may control the policies of the World Trade Organization or the IMF (hypothetical). By grouping together, countries gain more discretionary influence, and even higher bargaining powers than countries which do not belong to any economic and political grouping.

In essence, Huntington assumed that the loss of economic sovereignty is the sole cause to the development of the ‘grouping process. ’ Puchala might disagree with Huntington. He argued that “any general explanation of integration cannot rest on a single theory … but must rest on a multicausal framework that orders a series of more narrowly focused theories” (Kimura, et al, 2007). East Asia: A New Regionalism After the Second World War, some countries in Europe initiated efforts to integrating their economies. The ‘market union’ was abolished and the European Community was founded.

Halfway around the world, the countries of Southeast Asia formed an organization (ASEAN) which aimed at increasing economic activities among member states, reducing tariff rates, attracting foreign direct investments, and promoting harmonious relationships among members. In recent years, it is clear that the ASEAN is slowly becoming a powerful grouping in the global economic field. Healthy competition among member states increased the overall output of the region. Foreign direct investments also tripled after 10 years.

It was, however, the East Asian countries that have achieved relatively strong economic interdependence. The relative strength of interdependence made East Asia the focus region of the world economy (Dent, 2008). The following are some of the factors which contributed to the economic interdependence of East Asian countries: 1) The fast pace of liberalization. In just 20 years, the countries of East Asia successfully implemented liberal economic policies. Structural reforms were carried both in the micro (industry) and macro levels of the economy; 2) Expansion of foreign trade.

East Asian Regionalism, according to Dent (2008), developed in three succeeding phases. Here are as follows: 1) In the first phase, East Asian countries increased their optimal cooperation. Adjustment of interstate relations gradually became the ‘rule of thumb’ of East Asian countries. One may take the case of Japan and China. China relaxed some of its post-war sentiments against Japan in order to acquire more Japanese capital goods. In essence, China agreed to cooperate with Japan for efficiency purposes. Over the course of years, this cooperation developed into some form of partnership;

2) East Asian countries saw the need to implement common market policies (as a block). The relative disparity of market policies of East Asian countries in the 1980s produced significant deadweight losses to the exporting sectors. With the 1997 financial crisis, these same countries experienced the impact of differentiated market protectionism (partial protectionism). After these incidents, the countries agreed (through treaties and bilateral agreements) to increase specialization; as a means to increase competitiveness in the world market;

3) Gradually, the identity of East Asian countries became incorporated into a larger economic identity. The close economic variance of Japan, South Korea, China, and Taiwan in terms of competitiveness, efficiency, and quality management was generally factored into the East Asian identity. Today, investors from the United States and Europe seldom differentiate investment schedules among East Asian countries (except Japan); 4) The last process may be termed as the “formalization process. ” At this stage, the countries involved would explicitly define the purpose, objective, and nature of the regional identity.

This stage though is not yet manifested in the multilateral agreements among East Asian countries. Writing Style, Syntax, and Lively Prose The writing style of the author can be described as ‘formal’ and ‘synchronized. ’ Vast references to historical sources and scholarly literature characterized the book. This allowed the author to support his propositions with empirical references. Having said that, it is logical to assume that the author’s main purpose in attaching ‘credible’ references to the book is to prove the authenticity of his main argument.

With regard to syntax, most of the sentences in the book followed the standard rules of grammar and spelling. Although there are few dangling sentences in the book, they were generally irrelevant to the overall theme of the book. The author did not use any lively prose in the book. Most of the proximal “prose” in the book were generally referring to economic and political paradoxes of the 20th century relevant to East Asian regionalism. General Critique For Yoshida (2008), the concept of East Asian Regionalism is far from reality.

He noted that most bilateral agreements between East Asian countries focused intensively on specific industries (Yoshida, 2008). For example, while trade between Japan and Korea is purely intraindustry, trade between Japan and China is mostly inter-industry. Therefore it is difficult to prove that regionalism is possible if the involved countries have differentiated trade patterns. For Kimura et al (2007), the concept of East Asian regionalism can be sufficiently supported if there is a point of reference.

For example, the European Community is recognized by almost all scholars as a form of regionalism. Most of the implied concepts of regionalism were empirically derived from studies of the European Community. The book lacked the proper point of reference for supporting its major propositions. Broda and Weinstein (2006) provided several criteria for defining regionalism: 1) similarity of trade patterns, 2) less differentiated political structures, 3) differentiated market driven structures particular to countries, and 4) product variability.

According to them, such criteria are necessary in promoting and defining the ‘tangibility’ of any regional entity. The book lacked empirical validations for those criteria (Although it may be argued that Broda and Weinstein’s propositions are also arbitrary; that there relative empirical value is questionable). The differing opinions of scholars on the nature of regionalism do not alter the findings of the author. These findings may either prove or disprove the existence of a so-called “East Asian Regionalism. 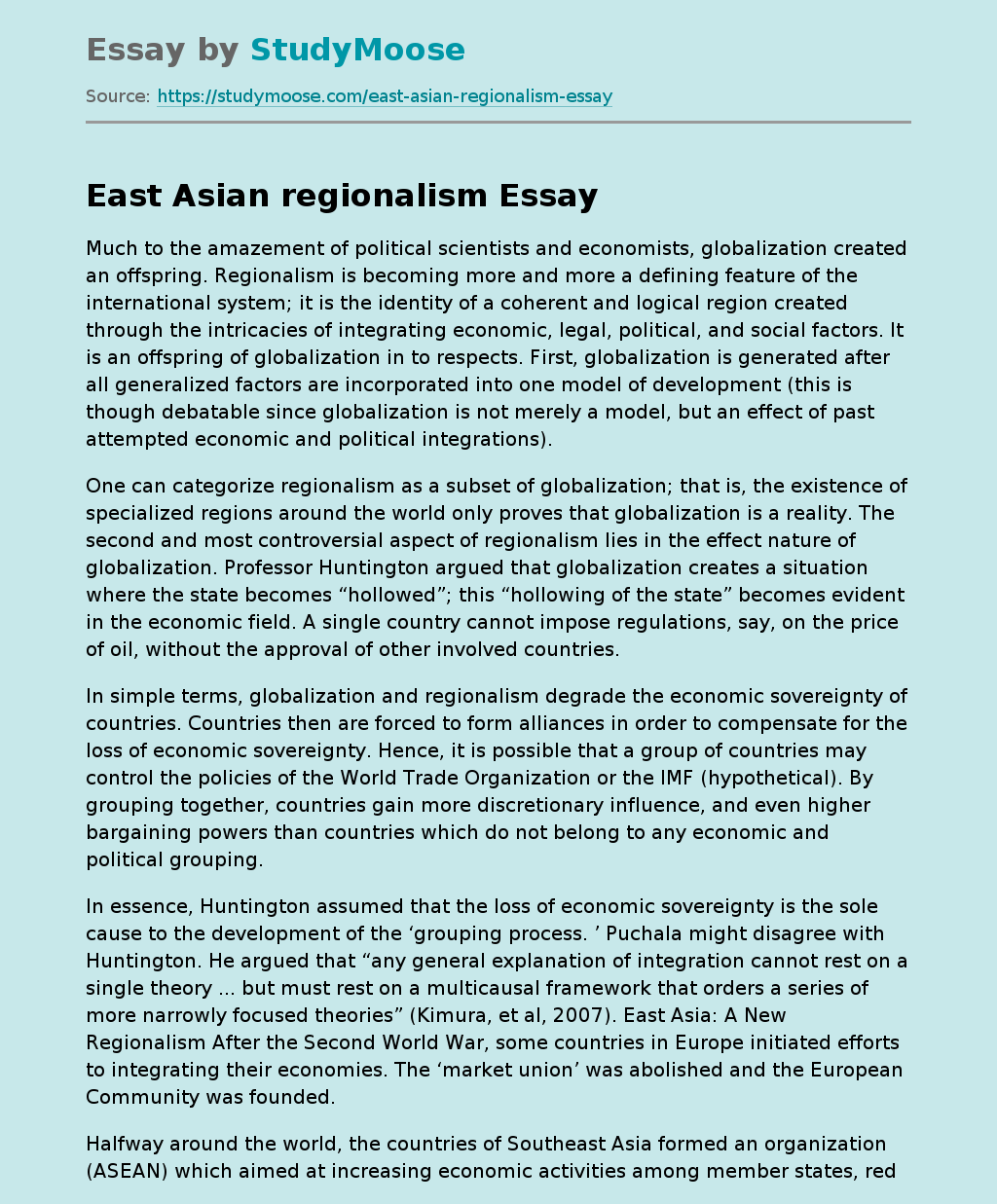