The Great Depression was one of the worst events in the history of America. A major cause of the Great Depression was the Dust Bowl, which began in 1929 and lasted throughout the 1930s. The Dust Bowl affected everyone including farmers and brought food supply to almost nothing in the Great Plains area. The Dust Bowl was affected by four main factors: drought, wind erosion, climate misconception, and poor land management.

During the Great Depression, there were actually four different droughts during the depression.

Don't use plagiarized sources. Get your custom essay on
“ Dust Bowl: Cause & Impact On Great Depression ”
Get custom paper
NEW! smart matching with writer

The droughts occurred in 1930-31, 1934, 1936, and 1939-1940. During these periods of extreme drought, millions of people moved out west looking for work. Out in the west, there were fewer and fewer jobs because of all the people moving there. There was fierce competition between the older residents and the newcomers over jobs and it created conflict between the groups. Poverty skyrocketed during this time and unemployment was at an all-time high.

Some of the topsoils carried up by these dust storms was carried all the way to Washington D.C. and New York City. People living in large cities at this time developed this disease called “dust pneumonia”. Symptoms of this disease include chest pain and difficulty breathing. Throughout the Great Depression, hundreds of thousands of people died from dust pneumonia. On May 11, 1934, a dust storm that measured two miles long traveled 2,000 miles to the East Coast and brought visibility down to several hundred feet for 2-3 weeks.

But the worst dust storm ever recorded occurred on April 14, 1935. The storm began in the Oklahoma Panhandle and spread east across the United States. More than three million tons of topsoil was picked up during the storm and was spread across the entire East Coast. This Sunday was referred to as “Black Sunday”.

The second effect of the Dust Bowl was climate misconception. Climate misconception began in the early nineteenth century when people first began to settle in the Great Plains. Most people thought the amount of rainfall there would never change and they would always receive enough rain per year to grow healthy crops. In the early nineteenth century, the average rainfall per year was over forty inches in most of the Great Plains area. Another reason why most people thought the land would always be good for farming is all of the propaganda sent out by railroad companies to get people to move out to the Great Plains.

The third main factor that caused the Dust Bowl was poor land management. Before the 1930s, most of the Great Plains had been plowed up as the wheat cropping business expanded west. The grass that naturally grew in the Great Plains could survive a drought, but the newly planted wheat could not. This resulted in the new wheat plants shriveling up and dying and exposed the topsoil to the surface of the ground. The topsoil had never been exposed before because there had never been many droughts in the Great Plains before the 1930’s. Visibility during these storms was reduced to a quarter of a mile. On a sunny day, a person could stand on a small hill and easily see twenty miles around him. But with this reduced visibility, a number of people got lost in these storms and died as a result.

Crop rotation had a major impact on the Dust Bowl. Farmers back in the early nineteenth century didn’t realize how essential crop rotation is in farming. Crop rotation keeps the soil to stay in large clumps which makes it harder for the wind to blow away. But the farmers continued planting wheat year after year, and soon all of the nutrients were depleted from the soil and couldn’t be replenished. Farmers nowadays switch outcrops every couple of years to avoid using all the nutrients that allow crops to grow. They also switch out fields for planting so the fields with little nutrients so that they can gain some nutrients back. Seventy-five percent of the crops grown in the Great Plains during the nineteenth and early twentieth centuries was wheat and that made the soil to break up into a dust consistency that made it lighter and easier to blow away by the wind.

The fourth and most important factor that caused the Dust Bowl was wind erosion. The heavy droughts reduced soil cohesion. which made it more erodible. The land lost its protection against the wind and it created the giant dust storms of the 1930’s Dust Bowl. The low crop prices, poor harvests, and lack of knowledge of farmers left them unable to properly take care of the land. It could’ve easily been prevented if our agricultural technology and know-how were more advanced, This is the main cause of the Dust Bowl because the wind erosion was caused by poor land management, droughts, and climate misconception. It is a proven fact that smaller farms will have more wind erosion than larger farms, Farmers that own small farms have to cultivate their land more intensely. They had to do this because they couldn’t afford to spend any money on soil conservation.

The Dust Bowl could’ve been mostly avoided if farmers realized the mistakes they made. The Dust Bowl was caused by both human and natural causes. Farmers in the Midwest were eager to expand and make more money. They could’ve progressed much faster with the invention of new equipment such as tractors, trucks, and other mechanical equipment. But nowadays we know a lot more than we did back then. 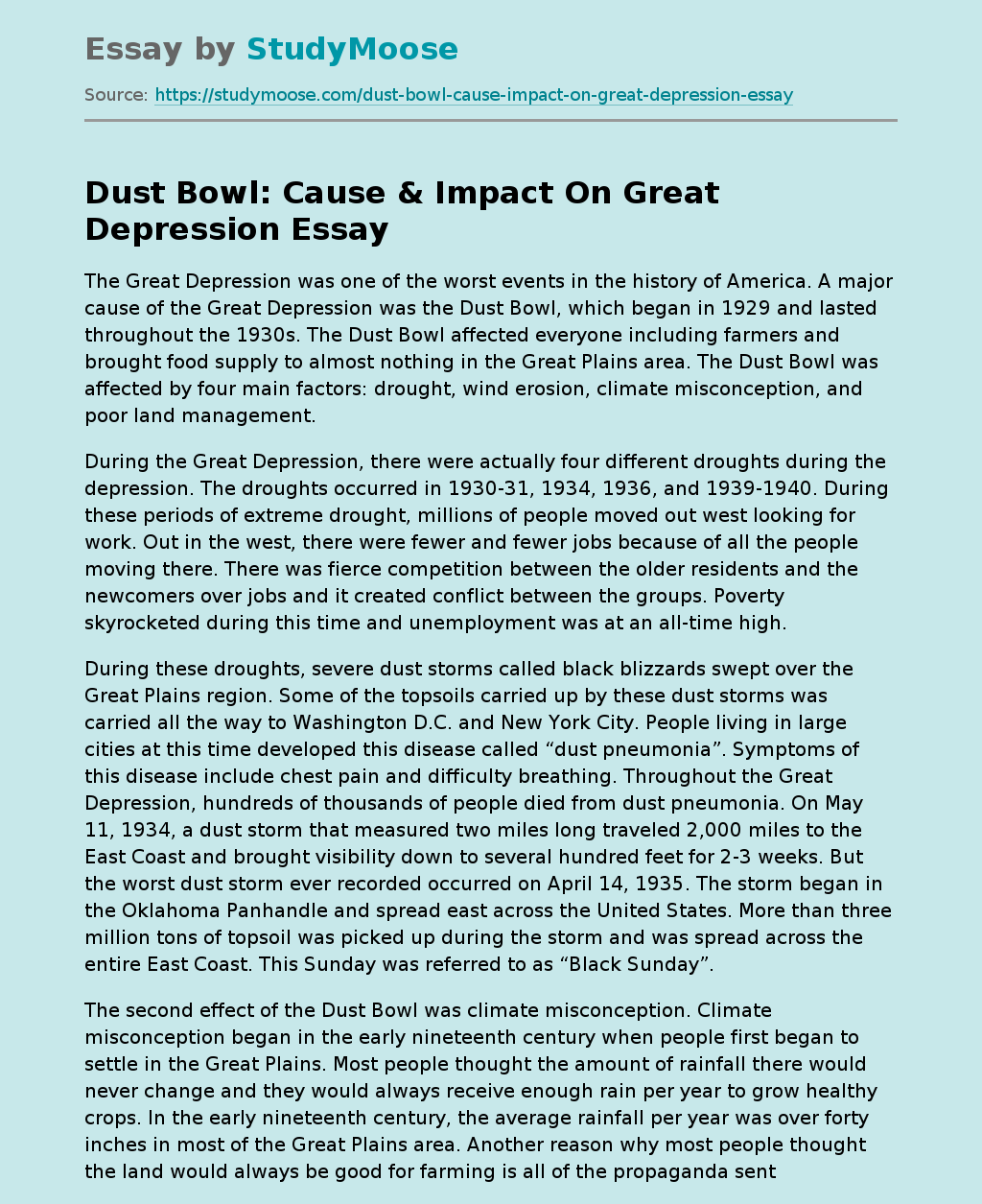