In the short stories “Araby” and “Eveline”, James Joyce uses a hopeful reality created by dreams to show the separate, but similar, fates of two people toying unsuccessfully with first love. Both characters dream of how their life will change when united with the object of their affection, sees their significant other through the rose-colored glasses of idolatry, and experience worry and confusion about whether devotion and affection will be enough to sustain their relationships.

In “Araby” the story is told through first person narrative about a boy who is experiencing his first crush.

Don't use plagiarized sources. Get your custom essay on
“ Dreams and Reality ”
Get custom paper
NEW! smart matching with writer

While his friends run about and play outside, he sits at the window waiting for a glimpse of Mangan’s sister. Thinking himself more mature than they, he chafes at the requirement of attending school where he considers his assignments “ugly monotonous child’s play” (page ? ). With Eveline, the reader is given a glimpse into a life of drudgery and the threat of violence from an alcoholic father from which “she had nobody to protect her” (page ?) through third person narrative.

Her desire to go away with Frank seems to be the perfect way to leave behind all that is depressingly familiar and venture out into a world where adventure and excitement await; “Frank would save her” (page ? ). The characters in both stories have dreams about changing their world and the objects of their affection play a key role.

The boy in Araby daydreams about Mangan’s sister and her beauty and what would make her happy.

From the very first relating of his glimpse of the girl when “the soft rope of her hair tossed from side to side” (page ? ) to his last description as he spoke with her about the Araby festival in the light from the porch which “caught the white border of a petticoat, just visible” (page ? ) it is clear that the character idolizes his friend’s sister. Eveline, too, recalls Frank as “very kind, manly, open-hearted” (page ? ). As a sailor, he has been to many places around the world and it is this sophistication and worldliness that appeals to Eveline, who fears ending up as her mother with “that [same] life of commonplace sacrifices” (page ? ).

Frank is her ticket to freedom and he teases her with trips to the theatre and tales of the danger and adventure in exotic ports. Both Eveline and the boy in Araby want something beyond their humble beginnings and see their loved ones as being the way to attain a happiness they’ve only dreamed about. Along with the dreams, however, comes a hard dose of reality. The character in Araby is so excited by the chance to purchase a trinket for his love that his school work suffers and thoughts of her intrude upon his everyday life his body “like a harp” (page ? ) and the memory of her words “like fingers running upon the wires” (page ? ).

With so much anticipation built up, it is not surprising that he feels failure in the end and sees himself “as a creature driven and derided by vanity” (page ? ). Eveline, too, has built up the dreams of her future life with Frank to heights it can never achieve. By staying in her father’s house she has the security of knowing what life will continue to be and freedom from guilt at leaving her aging father. Her sudden fear that Frank “would drown her” (page ? ) immobilizes Eveline and prevents her from running off to Buenos Ayres with Frank.

The characters in both stories are ultimately faced with the failure that unsurprisingly accompanies their dreams and affections. James Joyce has used both visual imagery and superbly executed exposition throughout to tell the tale of two young people who look to their first loves to bring them out of the despair of living in impoverished Ireland. He skillfully takes the thoughts of the characters from both “Araby” and “Eveline” through a sequence of despair, hope and finally, anguish, in conjunction with the objects of their affection, showing the reader that dreams are not necessarily based on harsh reality. 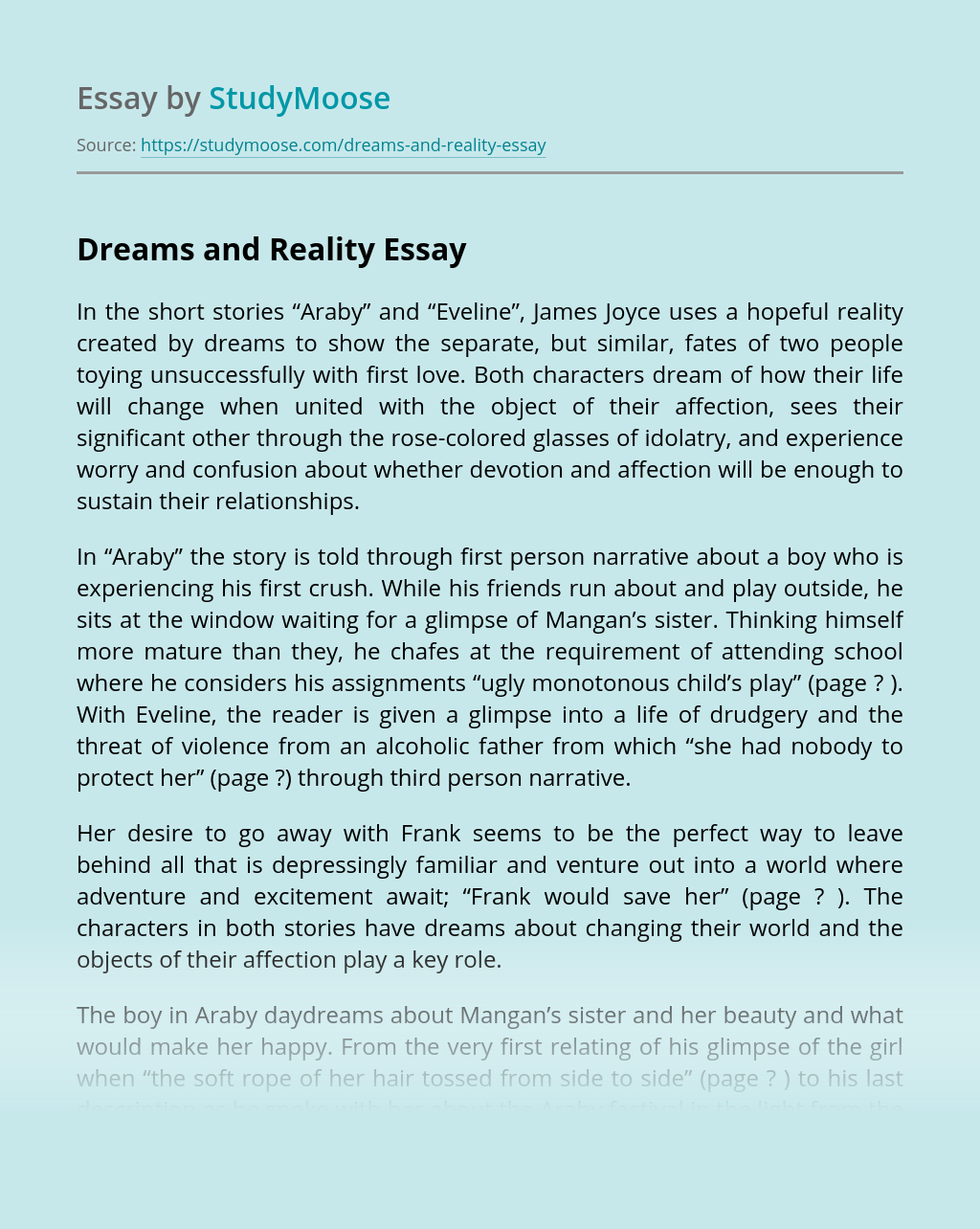