Don't use plagiarized sources. Get your custom essay on
“ Dr Jekyll and Mr Hyde Symbolism ”
Get custom paper
NEW! smart matching with writer

The novel Dr Jekyll and Mr Hyde is about the two sides of Dr Jekyll. Throughout the day he was known as a well respected doctor and at night he takes a potion which later turns him into Mr Hyde. Mr Hyde is an evil man who receives pleasure out of running small children over and going around the streets murdering people.

The story throughout creates a sense of mystery and unease.

There are many symbols of secrecy throughout the novel for example “the windows are always shut” which suggests that Mr Hyde likes to keep everything in, and this could symbolise his soul, in the way that when he conceals his true character from the outside world. There is also “the darkness in the square” which is symbolic of Jekyll and gives us the feeling that he is a man with a dark side. “The Locked Door” is a chapter in which Jekylls house is described. The door is locked it has two doors one has “No window, knocker or bell” yet again this creates an atmosphere of secrecy.

The door is “blistered” and “disclaimed”, and it is the door that Hyde uses. The house with two doors symbolises Jekylls dual personality.

The novel is set in London which is described as, “labyrinths of lamp lighted city” this suggests that it’s a place where you can easily be hidden or lost and symbolises secrecy. An example of suppression and secrecy is that it’s known as a “nocturnal city” which signifies that it come alive at night. The city is “plunged in darkness” we therefore associate the city with mystery and evil. It is “a city in nightmare”, this is a sinister image and therefore London seems threatening. The “low growl of London” this creates an image of a city which is threatening a bit like an animal.

The weather throughout the novel creates an atmosphere of secrecy as the “fog rolled over the city in the small hours”. The fog mysteriously blocks out light and covers things up. The smog is described as “chocolate coloured pall”; this creates an oppressive and secretive atmosphere. It’s rather mysterious “even in the houses fog lies heavy”; this could have several different meanings and is very mysterious. When its “three o clock on a black winter morning” this is as far as we know when the dark deed happen.

The key of Dr Jekyll`s evil nature is the potion, as he “swallowed the transferring draught”. This unleashes the underlying theme of his dual personality of secrecy and suppression. Mr Utterson is full of contradictions; he is respected and successful but very cold. This would be considered a serious fault in a lawyer such a position requires him to engage and deal with other’s problems. His life is about self denial and secrecy he is “embarrassed in discourse” but after a glass of wine or two “something eminently human beaconed from his eye”, he suppresses his sensual side of his nature and is therefore symbolic of the dual nature of man. Mr Utterson searches for Mr Hyde and breaks down the door of Dr Jekylls cabinet this seems to be an act of vengeance, which reveals his evil side and shows that he is hypocritical.

Dr Lanyon is not what he seems he is “somewhat theatrical”. He is described as a “hearty healthy dapper, red faced gentleman whose geniality was…somewhat theatrical to the eye”, this is some what narrow and conceals a dual nature. Also this is showing how superficial he is in his emotions .He also accuses Dr Jekyll of being a Scientific `freak` and totally disagrees with his experimentation with his potion, but Dr Lanyon is a hypocrite as he agrees to watch Dr Jekyll being transformed into Mr Hyde. The other characters throughout the play seem to appear totally differently to what they actually are, showing a dual nature of humans. The lady at Mr Hyde’s room “had an evil face smoothed by hypocrisy, but her manners were excellent” shows us that looks can be deceiving.

The potion is used to separate Dr Jekyll`s two personalities it is a “transforming draught”, he enjoys being evil and is a “profound double dealer”. Dr Jekyll has a break from drinking the potion for several months but when he does drink it again “evil-comes out roaring” and he murdered the distinguished MP, Sir Danvers. Drinking the potion releases Mr Hyde who has been “long caged” and suppressed. In the will secrecy has been revealed this is because it has been “sealed in an envelope and locked in private”, this is the will that shows “the lawyers eyesore”, it could possibly be locked in a safe. Also symbolic to this is the fact that characters are not what they seem, and there true feelings are only revealed within the letters. As the letters are opened revelation is seen as suspense is being unleashed.

Mr Hyde is “pale and dwarfish…lost in stature” to the other characters he is described as “pure evil” and feel “loathing and disgust”, but they do not seem to accept that everybody has a Mr Hyde within them. Mr Hyde is suppressed deeply within people, unlike Dr Jekyll whose Mr Hyde is nearer to the surface due to the potion. As Mr Hyde grows and Dr Jekyll starts to lose “hold of being his original and better self”, he is then transformed into Mr Hyde without taking the potion. Mr Hyde is much taller and has a broader physique; this is indicating that his evil side is now a larger part of Dr Jekyll.

Dr Jekyll is described through the use of animal imagery, he is seen as “beast like” and a “hissing snake” the animal within him is revealing his evil nature. The “hissing snake” is usually associated with sin and sins can usually bring out the devil within a person. His dual personality is described as “ape like fury, like a monkey”, “the beast in a man” represents the physical and sexual side to Mr Hyde. He “cried out like a rat” is not normal for and “hardly human”, maybe representing that he has sexual secrets.

Dr Jekyll is a hypocrite and a “profound double dealer”, he has two lives, he recognises that he enjoys being evil but cannot admit that it is a natural part of himself; he therefore relies on the potion to separate his two personalities. In the chapter “Jekyll`s Statement” Jekyll changes to Hyde in broad daylight which symbolically suggests that evil has vanquished good as that Hyde has vanquished Jekyll. Dr Jekyll decides to try and refrain from using the potion and be “true to himself”, because he felt he was “slowly losing hold of his original and better self” and slowly transforming into Mr Hyde.

He awoke one morning after a night as Mr Hyde, but rather than waking up as Dr Jekyll he woke up as Mr Hyde this is when he decided to stop using the potion. He tried to resist temptation and “swallowed the transforming draught” this released Mr Hyde who had been suppressed and Mr Hyde “came out roaring”. Dr Jekyll is the greatest hypocrite in the novel as he admits that he enjoys the wicked part of his nature but cannot accept that it is a natural part of him and therefore seeks to separate it from him in his scientific experiments. 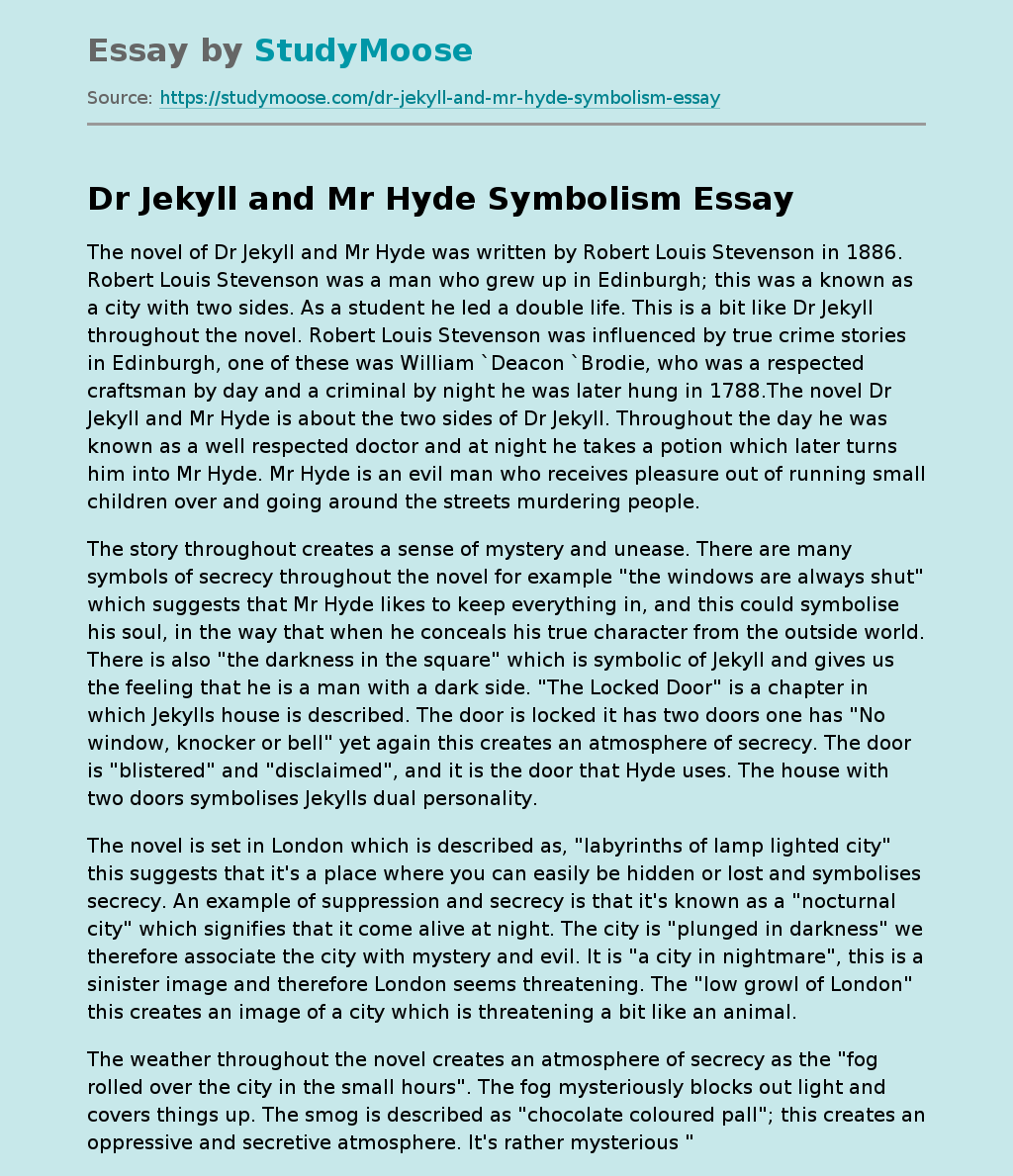