Jennifer Millard’s Performing beauty: Dove’s “Real Beauty” campaign was made to conduct a study on the results of the company Dove’s Real Beauty Campaign onto it’s targeted audience, women. Throughout the study Jennifer Millard explains that Dove’s Real Beauty Campaign is a series of advertisements in magazines and commercials that promotes and empowers beauty for every women, no matter what other media outlets says. Millard uses focus groups and interviews with sixteen Canadian women to investigate the opinions; with ages ranging from fifteen to fifty-nine years old.

Don't use plagiarized sources. Get your custom essay on
“ Dove’s Real Beauty Campaign: a Reflection ”
Get custom paper
NEW! smart matching with writer

Within the study, I found two main themes within Millard’s article, which will be discussed and reflected on how it contributed to her study.

The first theme I found quite interesting in Millard’s study was how she was connecting her definition of beauty towards a symbolic interactionist perspective by explaining how it is the culture and society that determines which features would be deemed as beautiful or not.

I somewhat disagree with Millard’s connection because while the media outlets to society what they should and should not be, most of the content was created by the outlets themselves with their opinions of what society should be. While the society may have certain opinions on these topics, the media elaborates on the opinions society has and makes them more negative and demanding then they actually are.

For example, in Millard’s study she shows the participants an advertisement from the Dove Real Beauty Campaign of a naked, overweight, middle-aged African American woman.

After seeing many of the other Real Beauty Campaigns, this was the first advertisement that got a negative reaction from one of the focus groups. “Sasha: Sometimes I’m like ew, I wonder why is this even in here? Like all these Dove ones, there is old wrinkly lady. Her legs are like this and you can’t see any- thing and it’s like why is she in here?

Monica: She’s naked and like oh no!” (Millard 164) From these reactions that came from the youngest aged focus group, it reflects the negative attitude regarding nudity the media has created against overweight, non-white women. The general, society-made opinion on nudity is that it is an act to be seen not in the public eye, but in a private setting. The media has taken that opinion of nudity and subjected it to making it more tolerable in public (in certain films or advertisements) but only if the people who are naked are deemed beautiful enough. An argument that can be made against my point is that only one of the focus groups in Jennifer Millard’s study had a negative reaction to the advertisement.

Another theme that I found when reading Jennifer Millard’s article was the idea of privilege that the media creates within the desire of beauty. By being classified as beautiful in society, the media creates a shift in power that only beautiful people can have and reinforces the power within majority groups in the society. “In Western culture, those with beautiful bodies and faces “get more” out of life because beauty is highly valued (Black 2004). Beautiful people are viewed as more intelligent, powerful, healthy, and of higher class than the masses of regular Joes and Janes (Plous and Neptune 1997).” (Millard 150). To make sure this idea of privilege gets reinforced, and not every person can be classified with is privilege, the media has created extreme expectations that are very difficult for a woman to fully achieve every requirement. These expectations range from being tall and having a slender body, long, shiny hair, clear skin, and trendy, expensive clothes.

These expectations creates a form of privilege within society, that the small percentage of people who have all those qualities are classified correctly will all the benefits and advantages. I definitely agree with Millard’s on this issue because everyone who is not classified as beautiful has seen this form of privilege in the media. By looking at a tabloid magazine or by watching television, the privilege of beautiful is often flashed into the eyes of the less worthy, non-beautiful majority. Award shows is a obvious example of this privilege. Here famous and usually beautiful people gather and attend a extravagant night of drinking and celebration, and accompanied by thousands of dollars worth of jewellery and clothing on their bodies. Throughout their campaign, Dove promotes equality of beauty between all groups of women, no matter their size, shape or age.

With their campaign message, they are attempting to eliminate the privilege that only women classified as beautiful deserve. As positive as this campaign is, at the end of the day Dove is a company trying to make a profit. Instead of the usual kind of advertising with the message that their product will make the woman who buys it more beautiful; they state that every women is already beautiful, and they can embrace their beauty by buying a dove related product. From advertising with this point of view, Dove is assuming that no women knows their true beauty, and will never see it unless they buy their products. When looking at that viewpoint Dove is stating, it can be seen as offending towards any woman who is already confident in their beauty and self-image.

In conclusion, while the Dove Real Beauty Campaign is certainly not the only solution towards changing the view of beauty in the media, Jennifer Millard’s study discusses the many pros and cons the campaign offers towards women in a fair matter. Millard also presents the themes of a symbolic interactionist perspective and of privilege that help benefits the Real Beauty Campaign which in time, creates more positive content within the media. 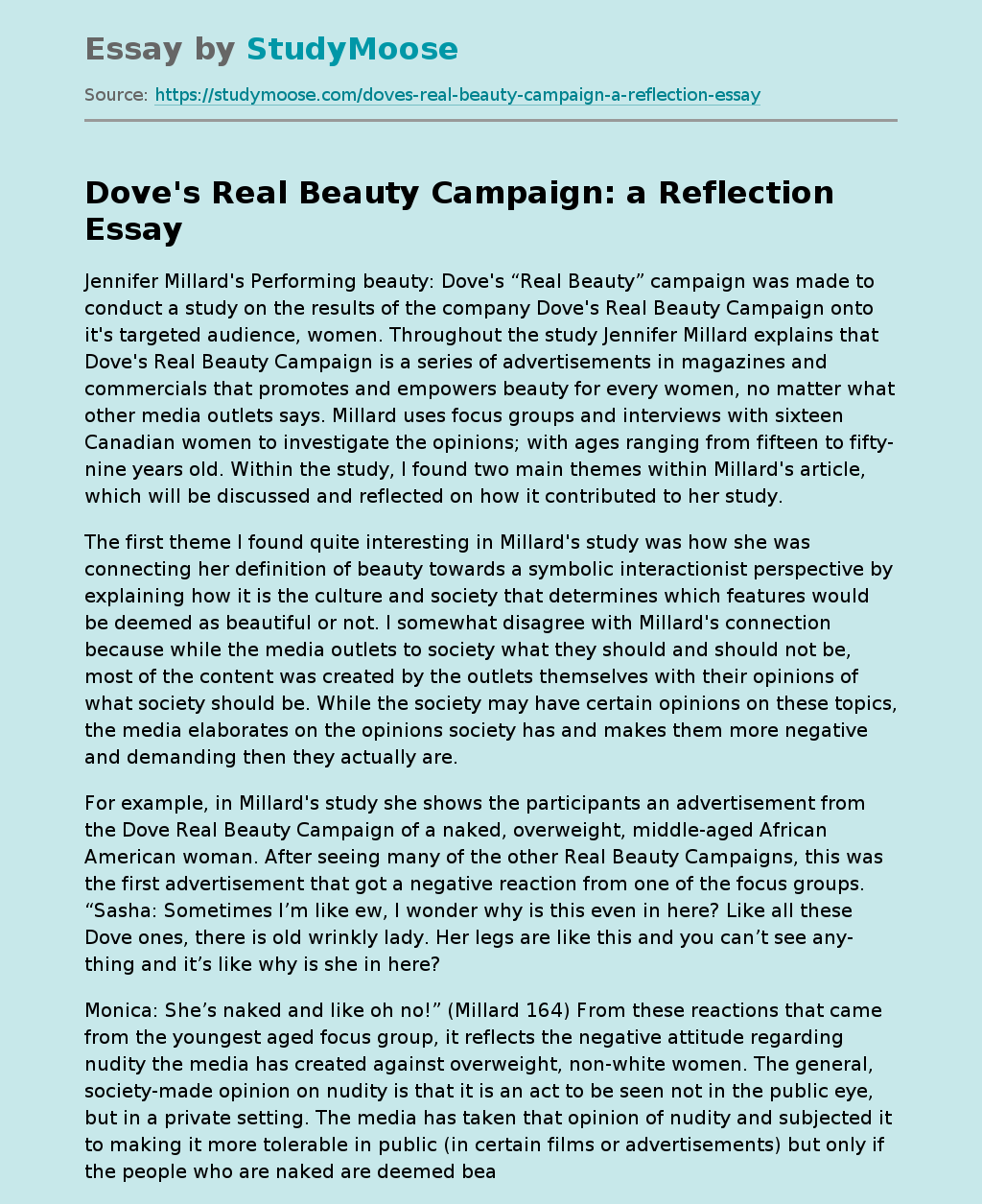