In “Dover Beach,” Matthew Arnold creates a monologue that shows how perceptions can be misleading. The theme of illusion versus reality in “Dover Beach” reflects the speaker’s awareness of the incompatibility between what is perceived and what truly is real. Arnold conveys the theme of “Dover Beach” through three essential developments. First, he uses visual imagery. Second, he uses sound (aural) imagery. Third, he uses rhythm and metric. These mechanics alone do not explain why illusion and reality differ, but they do help to explain how Arnold sets up the poem to support the theme.

Don't use plagiarized sources. Get your custom essay on
“ Dover Beach Theme Imagery and Sound ”
Get custom paper
NEW! smart matching with writer

The strongest support of the theme comes from its intense imagery which is scattered throughout “Dover Beach.” The most affecting image is the sea. The sea includes the visual imagery, used to express illusion, as well as the auditory imagery, used to express reality. The image is intensely drawn by Arnold to vividly see the faith disappearing from the speaker’s world. The image of darkness encompasses the speaker’s life just like the night wind pushes the clouds in to change a bright, calm sea into dark, “naked shingles.

” The irony of “Dover Beach” lies in the contrasting elements of the troubled speaker and the calm sea with tranquil moonlight. For example, the moonlit cliffs of the first stanza appear again in the lines “for the world/Which lies before us like a land of dreams.

The sea which begins calm and tranquil, becomes a roaring shore; with “naked shingles” and “night-wind” which in turn disrupts the speaker’s faith.

The speaker explains on how that once great and calm sea of faith has turned into a roaring, dark, windy, dreary, and gravely bench. In reality, the speaker’s faith disappears with only darkness to replace it; a powerful symbol of disillusionment which sets the mood for the rest of the poem. In stanza 3, the simile “like the folds of a bright girdle furled” (Line 13) contrasts with “Vast edges drear/And naked shingles of the world” (Lines 27-28)

The speaker’s problem also appears in the sounds of the words throughout the poem. The consonant quality of the g and the r in “grating roar” (line 9) takes on an auditory quality, whereas the previous stanza displayed visual qualities. The grating and roaring pebbles produce sound while the calm sea and glimmering French coast produce a visual effect. In line 13, the words “tremulous cadence slow” slows the reader with the sounds of the t, c, and s sounds. After stanza two, the third, fourth, and fifth stanzas alternate sounds (stanza three, first three lines of stanza four, last five lines of stanza four and stanza five). The smooth sounds of l in line 7, “long line,” and the f in line 23, “folds” and “furled,” point out the instances of illusion where the conflict of the illusion versus reality does not exist. In contrast, the rough sounds in line 28, “naked shingles of the world,” indicate the places where reality not only exists, but where illusion cannot exist, and the speaker cannot escape his misery.

The sounds of the words not only slow the speaker’s struggle, but also suggest the underlying motif of light and dark. The words “glimmer” and “gleam.” The ‘gl’ suggests light whereas the ‘ea’ suggest smallness. The ‘er’ suggests movement. All combined, the allusion is made to the idea of a small, moving light. This contrasts with the darkness of the later stanzas indicated by the words “darkling” and “night.” In the third stanza, the words “faith” and “bright” followed by “but” imply a loss of faith, “and in doing so associates darkness with loss of faith”. The lack of a pattern in the rhyme scheme reflects the speaker’s inner debate. The rhyme scheme of the first stanza consists of ABACD. The first and third lines rhyme, “to-night” and light,” but no other lines rhyme in the first stanza. The same instance occurs in the second stanza’s rhyme scheme of BDCEFCGHG. Multiple lines do rhyme, but in no set pattern. This opposes the pattern of the iambic rhyme of the first stanza. A vivid description of the calm sea in the first eight lines allows a picture of the sea to unfold. The next six lines really stand out, especially the words “Listen,” “grating roar,” and “eternal note of sadness.”

The distinction between the sight and sound imagery continues into the third stanza. Sophocles can hear the Aegean Sea, but cannot see it. He hears the purposelessness “of human misery,” but cannot see it because of the “turbid ebb and flow” of the sea. The allusion of Sophocles and the past is replaced by the auditory image, “But now I only hear/ Its melancholy, long, withdrawing roar/ Retreating to the breath/ Of the night-wind, down the vast edges drear/ And naked shingles of the world” (Lines 24-28). There is a sense of sympathy. The words “tremulous cadence slow” and “eternal note of sadness” evokes a sense pity for the speaker whose struggle with illusion and reality seems to end in darkness and sadness.

Not only will the speaker have to confront reality, but “beyond the ‘naked shingles’ the darkness continues, interrupted only by the confused alarms and fights and ringing conflicts of battle by night-the sounds of supreme futility” Arnold uses much alliteration and assonance in the poem as well. For example, in line 31, “To lie before us like a land of dreams”, repeating the letter L at the beginning of three words. Also, in line 4, “Gleams and is gone…” repeating the letter G. Arnold shows use of assonance in line 2, “tied/lies” and in line 31, “lie/like”

The most important method in “Dover Beach” includes the rhythm and the meter of the lines and the stanzas of the poem. The sea/is calm/to-night. The gentle lively rhythm of the iamb mirrors the “ebb and flow” of the sea. The actual words of the first line manifest this idea to picture a calm sea gently lapping at the beach. The second line also reveals a calm sea. However, line 3 breaks the pattern and forces the reader to break his or her own rhythm. Line 3 includes: Upon/the straits,//on the French/Coast/the light. The line begins and ends with an iamb, but the middle is broken up. This is a foreshadow of the disorder to come. The fourth line breaks up even farther at the beginning, but the fifth line recovers the rhythm. Glimmering/and vast//out in/the tran/quil bay.

The illusion of the rhythm masks the reality of the struggle of the speaker. The auditory qualities of lines 9-14 set the tone for the rest of the poem. “LISten! yoU HEAR the GRATing ROar / of PEBbles which the WAves DRaw back, anD FLinG, / aT their return, UP the HIgh strand, / BEgin, anD ceASE, anD thEN agAIN beGIN, / with TREMulous CAdenCE SLOw, anD bring / the eterNAL noTe oF SADness IN.”

Arnold’s “Dover Beach” applies technical qualities, symbolism, and imagery to reveal the theme of illusion versus reality. The emotional struggle of the speaker is supported by the rhythm and the meter, the lack of a consistent rhyme scheme, the figures of speech, the sound of the words, and the irony of the entire poem. The symbolism of the sea and the imagery of light and dark bring out the alternating visual and auditory qualities, which elaborate on illusion and reality, respectively, Arnold’s portrayal of one person’s battle with illusion and reality shows a complex view of humanity in a simple poem. 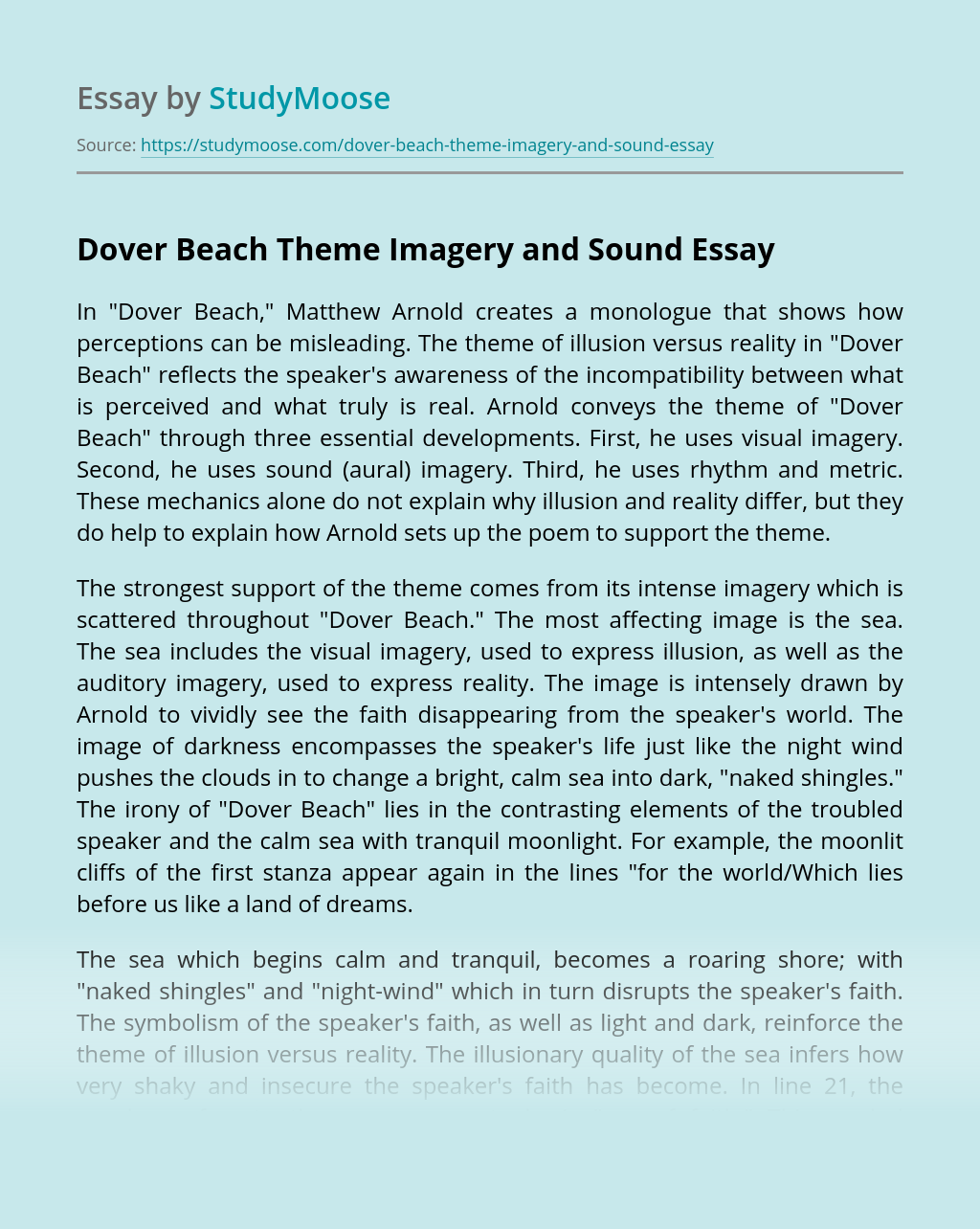