Dota as Entertainment and Its Effects

As time continues to run, our world keeps getting more advance and modernize and until now, it doesn’t stop. One of the finished products of modernization is the machine called “Computer”. Since, it was invented and being developed, it gives us benefits and brings significance and importance to our lives. But as we all know that when things are not used properly, there’s always a negative effect that occurs. It can be in our thoughts, behaviors, actions, and or in other ways.

Don't use plagiarized sources. Get your custom essay on
“ Dota as Entertainment and Its Effects ”
Get custom paper
NEW! smart matching with writer

Computer games are slowly arousing and it is one of the things that bring the negative effect.

Many people are playing and having so much fun with this that can be a form of entertainment. “DotA” is one of the examples of computer games. And this is where our topic began to start. “DotA” means Defense of the Ancients. It is commonly the word that we can hear on most people especially the youth and some actually doesn’t have any idea about it.

We usually observed some students talking about “Laro tayo DotA mamaya. ” or “We play DotA later. ”not going straight at home after school.

It captures our attention when we are hearing those students talking about the thing. DotA. ”and actually, we observed that it affects their behavior especially in academic standing. This thing about “DotA” make our research group chose it as our topic in thesis, thinking about the thoughts that disturb our minds and searching answers for the benefit of mankind. Dota Effect DotA effects have been continuing for several years since the launch of the War of War Craft and the Frozen Throne.

Almost every people especially the youth has played this game at the very beginning of the years.

What is the content that DotA offers to the gamers? And how’s the excitements that it brings towards the gamers

And you may ask a key question, how long will this DotA effects last? DotA basically is a game expanded from version of War of War Craft, which initially a strategic game similar to Red Alert series. But eventually evolved into current state. Gamers can play DotA on a wide range; from single player, local LAN, or LAN over internet connection with various countries’ gamers. There contain variety of Heroes to be chosen as your haracter, there are many type of gaming modes, and different type of map for the game modes.

There’s no need for me to explain how the game is conducted and the features of the game. Because there are lots of gamers who are more expert than me Exist in the DotA community. For me, this DotA is not a difficult game for amateur; you can start play DotA anytime and familiar with this game easily over 2 or 3 days. But one thing to remind you is, DotA is not easy to master and play like a Pro. You can take up to several years spent on this game but still behave like amateur.

There are lots of effects which DotA brings to our society, to be particular, the youth. With no doubt this game is one of the hottest game in the market. In every cyber cafe you can see gamers stick with their screen and mouse and keyboard, with their face full of concentration and excitements finding ways to defeat their opposing team or enemies. Actually DotA serve as a platform for youth to communicate. Teenagers who initially don’t know each other can easily become friends through DotA game, because this game provides a common topics for every of the teenagers.

They can discuss about the weapons, the heros, the tactics, the different versions of… Have you heard about DotA? What does Dota mean? Why is it so addictive

DotA, short for “Defense of the Ancient”, is a custom map made for the Warcraft III: Frozen Throne game. DotA is a team-strategy-game where players can choose sides and his own hero. There are two sides on the games, The Sentinel and The Scourge. Players on the same side fight the other players on the opposing to win the game.

The objective of the game is to destroy the opponents’ base together with computer controlled units called creeps. Heroes start at level 1 and levels up to level 25. Heroes level up while killing opposing heroes and creeps. Heroes gain skill when they gain additional levels. It can be played as starting 1-on-1 up to 5-on-5. DotA was originally developed by a map-maker named Eul. There were different DotA variations that time. The most popular one is “DotA All Stars” which was developed by Guinsoo.

Dota as Entertainment and Its Effects. (2017, Mar 05). Retrieved from https://studymoose.com/dota-as-entertainment-and-its-effects-essay 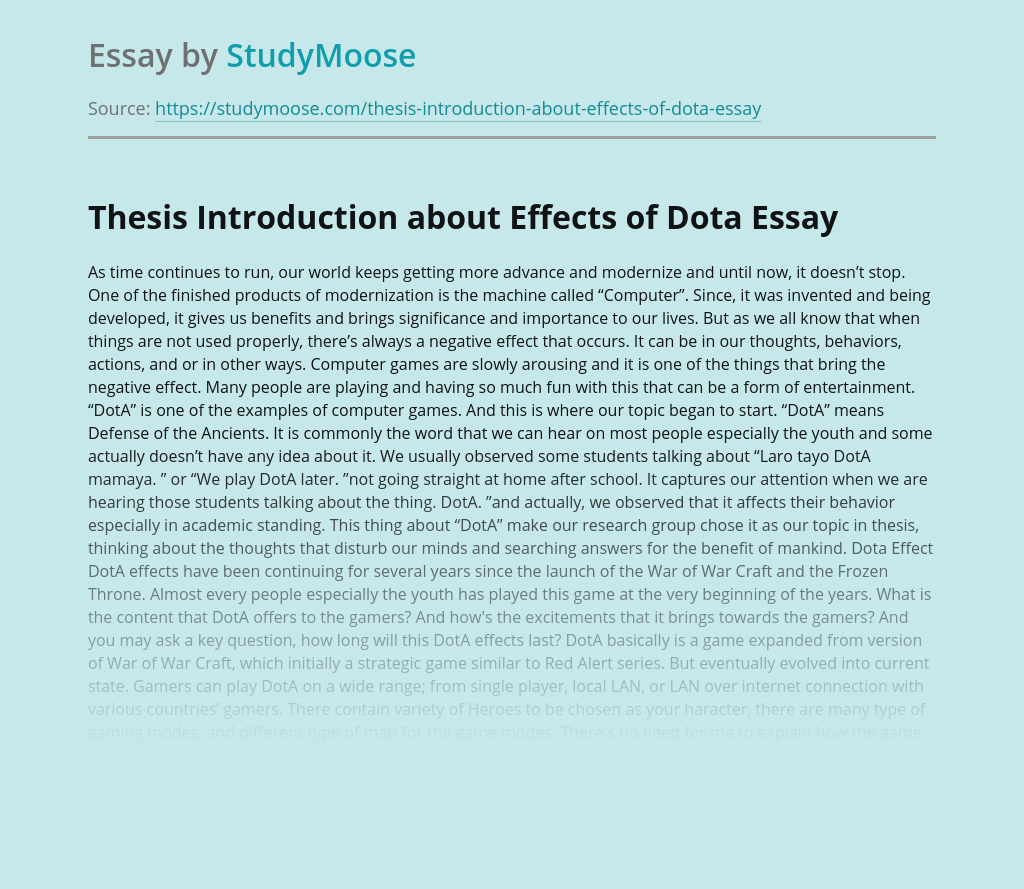