Military virologist Robert Neville id the last health human in New York City, a genetically-engineered variant of the measles virus that is meant as a cure for cancer had mutated in a lethal strain, it spread throughout the world killing 90% of humanity. The survivors became predatory beings refereed to as the “dark seekers” and killed those immune to the virus. Ever heard or seen that from somewhere? The movie I AM LEGENED is one of the thousand of movies linked to the conspiracy of doomsday.

Ever thought the world would ever come to an end? Today…? Tomorrow…? Maybe in 2 minutes…? Are you anxious that we may be at the eve of the end of the world as we may know it? Do you believe doomsday is a hoax, created to exploit the gullible masses, or do you truly believe we are on the brink of the exterminations of the human race and the end of the world? It is the purpose of this paper to attempt to prove that doomsday is a myth that has created a fascination with destruction of the world that is being promoted by scamming artist after money and fame.

People love to make things up, to sound important and to feel in control which is why 2012 is the year on everybody’s lips.

There have been many variations of what will happen when the world does end. The sun will dry out, magnetic poles will shift, planet X will nock earth of it axis, planetary collision, and apparently black holes will appear.

It is said this will all happen on December 21st, 2012 at 11:11 am universal time. Despite the fact that all theses predications will lead to the end of the world, i do not agree and therefore the public have been sucked into this lie.

NASA states that there have been many doomsday predictions that NEVER happened. There are actually 242 dates up to now. Some of those dates were many days in 1843 and 1844, March 10th 1382, June 6th 2008, also every year on January 1st but look, were still here.

Will the world end just like the calendar? Most of you have probably heard about the Mayen calendar or prophecy. The Mayens were astronomers that watched the skies and predicted earthquakes, volcanic eruptions, and solar eclipses. They uses past research o determine future events. They Mayens forecasted in to the future so far and the calendar stopped on December 21ss. 2012. But if you really think about it, calendars keep track of the passage of time, they don’t predict the future. The calendar has to end somewhere not only does it end; it begins a new cycle. The Mayen prophecy is just another hoax propagated by the internet, TVs, documentaries, movies and music.

The most famous prophet was Nostradamus. Nostradamus predicted a great comet “Nirbu” AKA “Planet X” would impact the Mediterranean on December 21, 2012 causing great destruction worldwide. But NASA states that Nostradamus and the Sumerians knew very little astronomy and most certainly didn’t know of the existence of Uranus, Pluto, and Neptune. So, discovering a twelfth body in the solar system is well off. Nostradamus just wrote his writings to make a quick buck. In Mathew 24:36; its states, “However know one knows the day or hours these things may happen, not even the angles in heaven or the son himself, but the father alone.” Writings are unintelligible things that are vague and the faiths of millions of believers in Nostradamus are still intact as they follow his path to hell.

A lot of people think that the world will fall into a perfect alignment on Doomsday. According to NASA, there are no planetary alignments in the next few decades. Scientists believe that the next planetary alignment will occur on 2854. One calculation of alignments within around thirty degrees shows that the last such alignment was in 561 BC. The earth and sun do align with the approximate center of the Milky Way Galaxy, but that has never created any effects on the earth and neither will it on 2012.

2012 is just going to be another year that we will live through. But however, people have been taken this too far even with proof given. During September 2008, a young woman in India became traumatized and depressed after watching well make but over hyped reports about the Large Hadron Collider. She believed these shows when they stated that the Large Hadron Colliderwill cause a miniature big bang or create a black hole and destroy the world. Terrified of these accusations she decided to take her own life. Don’t let the media fool you. Our lives didn’t end 2008… But hers did. 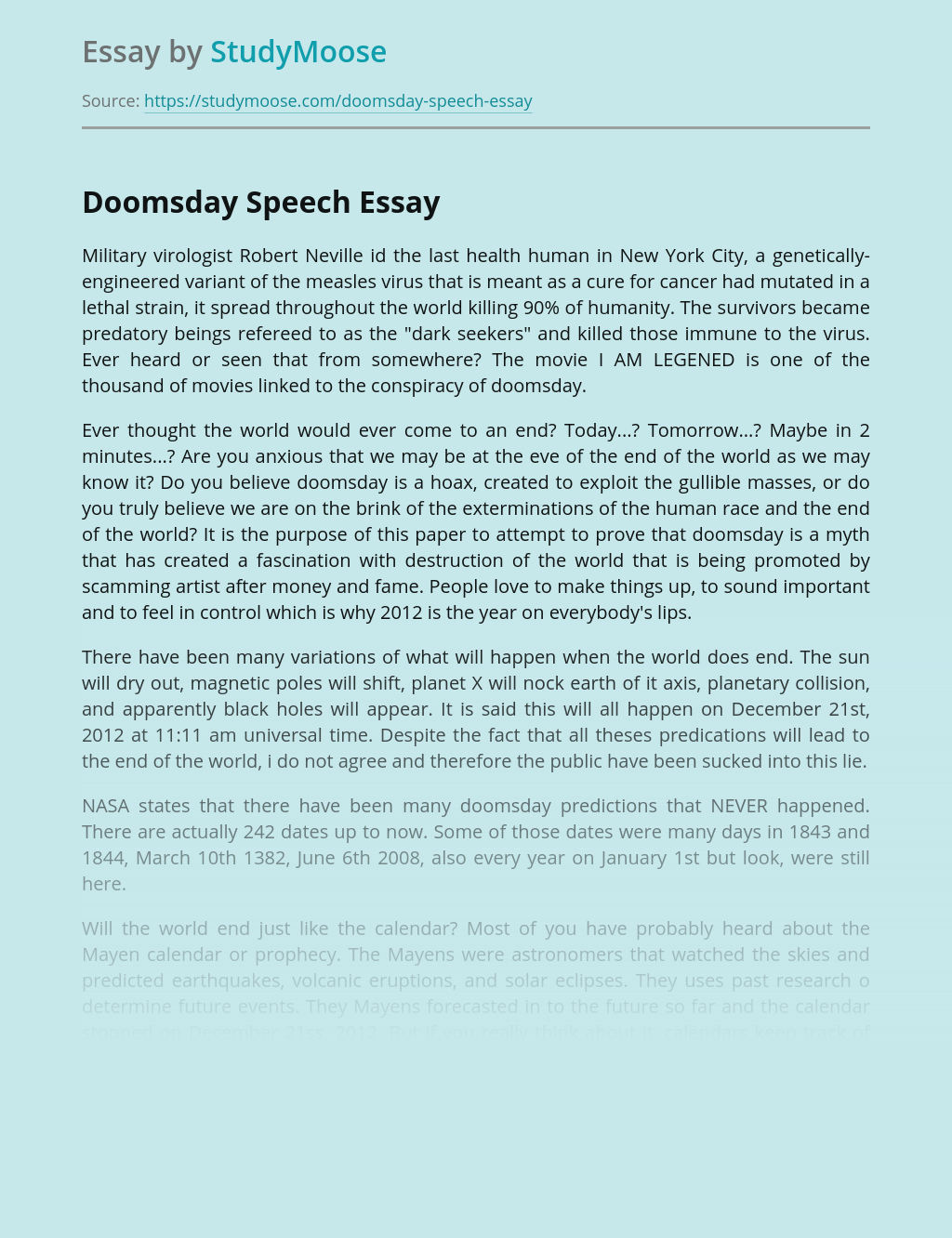 Don’t waste time
Get a verified writer to help you with Doomsday of Mankind Speech
Hire verified writer
$35.80 for a 2-page paper
Stay Safe, Stay Original