For a small subscription fee, people could come, get a diagnosis and a prescription. But the doctors there weren’t as highly trained as others and could often prescribe the wrong thing. Never the less Dispensaries became so popular that many turned into hospitals by the 20th century. Thanks to the Printing press, quack doctors didn’t have to travel all over the country. They could simply put an add in the newspaper for a ‘Cure All’ medicine. Affordable, practical and had absolutely nothing in them that could cure you, in fact, they’d more likely kill you.

Don't use plagiarized sources. Get your custom essay on
“ Doctor Edward Jenner ”
Get custom paper
NEW! smart matching with writer

When questioned, these people believed that they had suffered from a similar virus called cowpox and that this would stop them from catching the more fatal illness.

On the 14th of May 1796, Jenner conducted an experiment where he scraped matter from a cowpox sore which was on the arm of a milkmaid, then spread the matter into two cuts on the arm of a young boy called James Phipps. On the 1st of July 1796 he did the same experiment on the same boy, but this time, with smallpox matter.

The boy caught cowpox, but didn’t catch smallpox. Jenner repeated the experiment 23 times on different subjects and each time the result was the same. Finally, Jenner concluded that cowpox did make the sufferer immune to smallpox.

He called his new treatment ‘vaccination’ which meant ‘from a cow’. Although Jenner faced opposition at first to his vaccinations as he couldn’t explain how it worked. He was given a grant of 10,000 by the government in 1802 and a further 20,000 in 1806. Vaccination became free for infants in 1840 and finally became compulsory in Britain in 1853. By 1980 the World Health Assembly declared that smallpox was now extinct throughout the world.  Louis Pasteur (1822-1895) was a French chemist. He was asked by a wine company to explain why some wines turned sour while it was being made.

Pasteur discovered that there were germs floating in the air that caused liquids to go off. Pasteur then developed a method of killing the germs by boiling the wine, then letting it cool, this method was known as ‘pasteurisation’. He then set about proving that germs came from the air, and thus, could be prevented from entering the liquid in the first place. He sealed some liquid in an air tight jar, and left some of the same liquid open to the air. The liquid left open turned sour. After proving his germ theory with careful experiments, he then went on to help treat diseases.

He knew of Jenner’s vaccination and Pasteur thought he could explain how it worked. He examined the blood of healthy people under the microscope and compared it with that of sick people. He discovered that sick people had many germs in their blood. Pasteurisation is still used today to kill germs in dairy products. Pasteur went on to discover a vaccination for chicken pox, cholera, diphtheria, anthrax and rabies. Unfortunately not all of Pasteur’s ideas were accepted. He recommended boiling surgical instruments before an operation to kill the germs but many just ignored this advice.

And was only accepted when aseptic surgery became common practice. Pasteur was the first to discover the link between germs and disease. This led the way for others to follow, like Robert Koch. Pasteur made virtually the most important discovery about disease ever discovered so far.  Robert Koch (1843-1910) was a German scientist from Hanover. He read Pasteur’s work and in 1872 he began to research into the microbes that affected disease. In 1878 Koch discovered that microbes caused wounds to go septic. But his breakthrough came when he stained the microbes with dye thus enabling him to photograph them under a microscope.

Due to this method he was able to study them more effectively and prove that each disease was caused by different germs. He identified the microbes that caused TB in 1882 and cholera 1883. By 1900 he and his students had identified 21 germs that caused diseases. Koch’s assistant, Emil Behring, discovered the first antitoxin that could destroy the poison spread through the blood stream by bacteria. Koch’s research earned him the Nobel Prize in 1905.  James Young Simpson (1811-1870) was the son of a Scottish village baker. He trained to be a doctor and became Professor of Midwifery and Edinburgh University.

Simpson wanted to stop the suffering of his patients during child birth, but disliked using ether, because of its side-effects. Simpson discovered chloroform as an anaesthetic with two of his assistants when trying to find an alternative to ether in 1847. Although there was some opposition from the church, when Queen Victoria used it during child birth, all opposition faded. Simpson is now hailed as the developer of anaesthetics.  Florence Nightingale (1820-1910) was born in Italy to wealthy English parents. Frustrated by the lack of opportunities for women, she went to Germany to train as a nurse against her parents wishes.

In 1853 she worked in Middlesex Hospital during a cholera outbreak. In 1854 the Crimean War broke out. The Secretary at War asked her to go to the Crimea and to take charge of the hospital at Scutari in Turkey. She arrived with a team of 38 nurses to find the wounded lying on bare boards among piles of filth. The army doctors opposed Nightingale’s plans but despite this she transformed the hospital by improving sanitation, cleanliness and supplies. Within two years the death rate had fallen from 40% to 2%. Nightingale used her reputation to set up a nursing school at St Thomas’ Hospital, London.

By 1887 Nightingale’s nurses were working in Australia, Canada, India, Sri Lanka, Germany, Sweden and the USA. Their standards helped turn nursing into a respected profession. Nightingale played a vital role in reforming the way hospitals are run today and establishing the nursing profession.  Edwin Chadwick (1800-1890). A civil servant from Manchester. In 1842 he published his ‘ Report into the Sanitary Condition of the Labouring Population of Great Britain’. Which proved that life expectancy was much lower in towns than in the countryside. Chadwick’s ‘Report’ challenged the ‘laissez-faire’ (let it be) attitude prevalent at the time.

Chadwick argued that it was possible for the government to improve people’s lives through reform. Partly due to pressure from Chadwick and partly due to fear of cholera, Parliament passed the firth British Public Health Act in 1848. Like many people of the time Chadwick believed disease was caused by air pollution. His ideas on cleaning up towns were a step in the right direction but his conclusions were far too general as they didn’t address the specific causes of disease. He was however the first major figure in public health and helped to make later reforms possible. 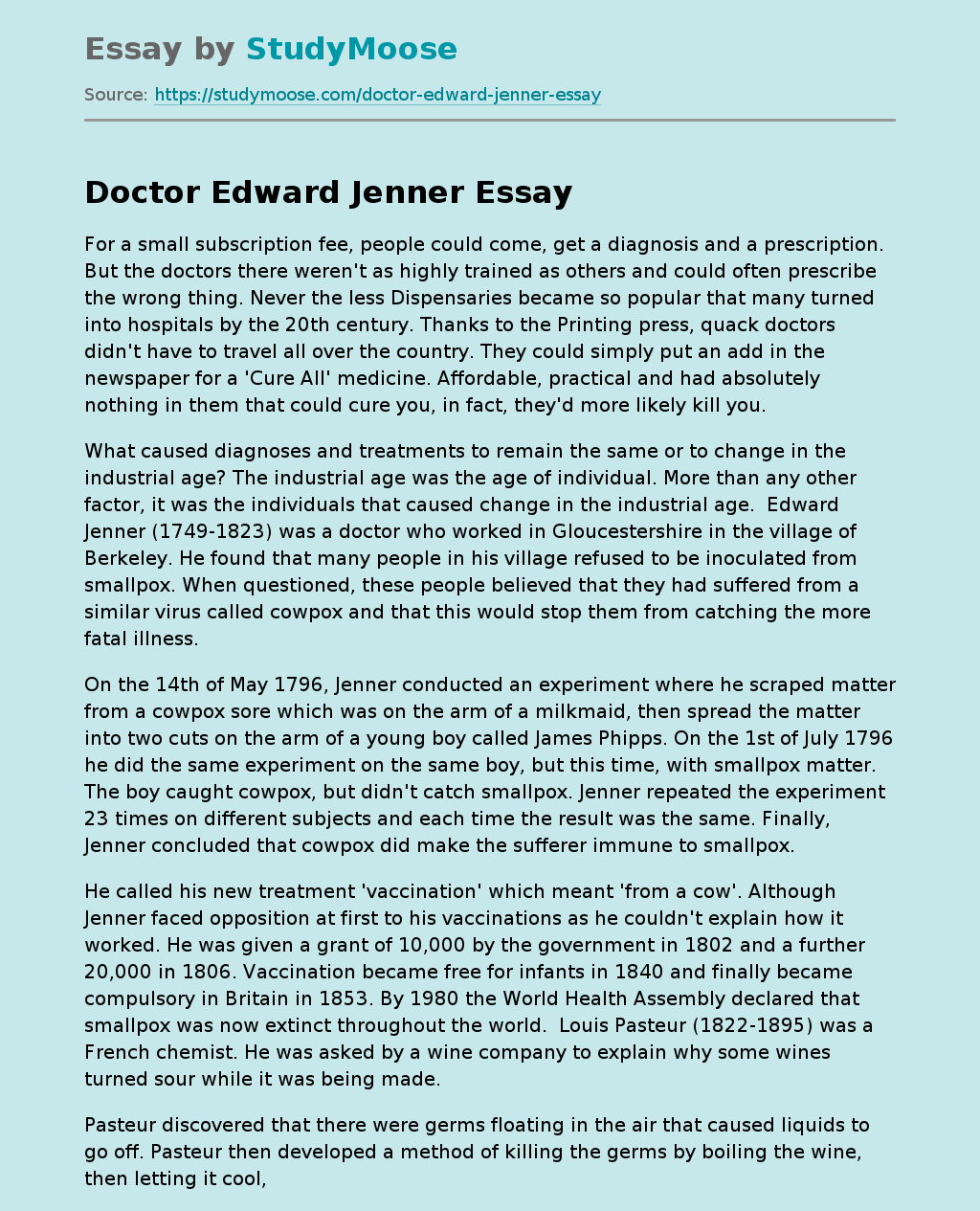