Do You Ever Wonder What Would Happen If Had Gun Control?

There has been a lot of mass shootings in the past few years but is gun control really the answer to end all this? There has been a lot of talk about there being more strict gun control laws, but this is not the way to help end mass shooting. Guns actually save more lives each year then they do kill, according to the CDC. Guns save about 500,000-3,000,000 people each year. Compared to about 13,000 deaths excluding suicidals. Many states with the highest crime rate have the most strict gun laws.

Don't use plagiarized sources. Get your custom essay on
“ Do You Ever Wonder What Would Happen If Had Gun Control? ”
Get custom paper
NEW! smart matching with writer

For example Chicago, IL has some the most strict gun laws but the highest crime rate. Majority of the mass shooting happen in gun free zones. There is a quite a bit of school shooting each year, and there is no one armed at most schools which makes them a easy target for mass shootings. Is there shooting at gun stores?

Theres not very many because why would someone go shoot up a gun store when everyone is armed? People want the easiest place to kill has many people as possible in the least amount of time.

Thats why we the most shootings in gun free zones. People are going to kill if they want to kill. Having gun controls not gonna stop someone from killing people. If we look at 9/11 there was about 3,000 people killed and we never had talk about banning air planes. There has been a few cases where people took a car and run over people and killed them, and its easier to get a car then a gun.

Even with gun control people will still get guns and theres still going to be mass shooting.

No matter we do there we still be mass shootings or killings. People are still going to kill other people if they want to, no matter what they have to go though. Putting more gun control laws in place will only make it harder for the good people in the world to get them. Like hunters, target shooting, and people that just want to protect them selfs and there families. So we leave the gun laws the way are, and help people with mental issues we will be better off.

Do You Ever Wonder What Would Happen If Had Gun Control?. (2020, Sep 05). Retrieved from https://studymoose.com/do-you-ever-wonder-what-would-happen-if-had-gun-control-essay 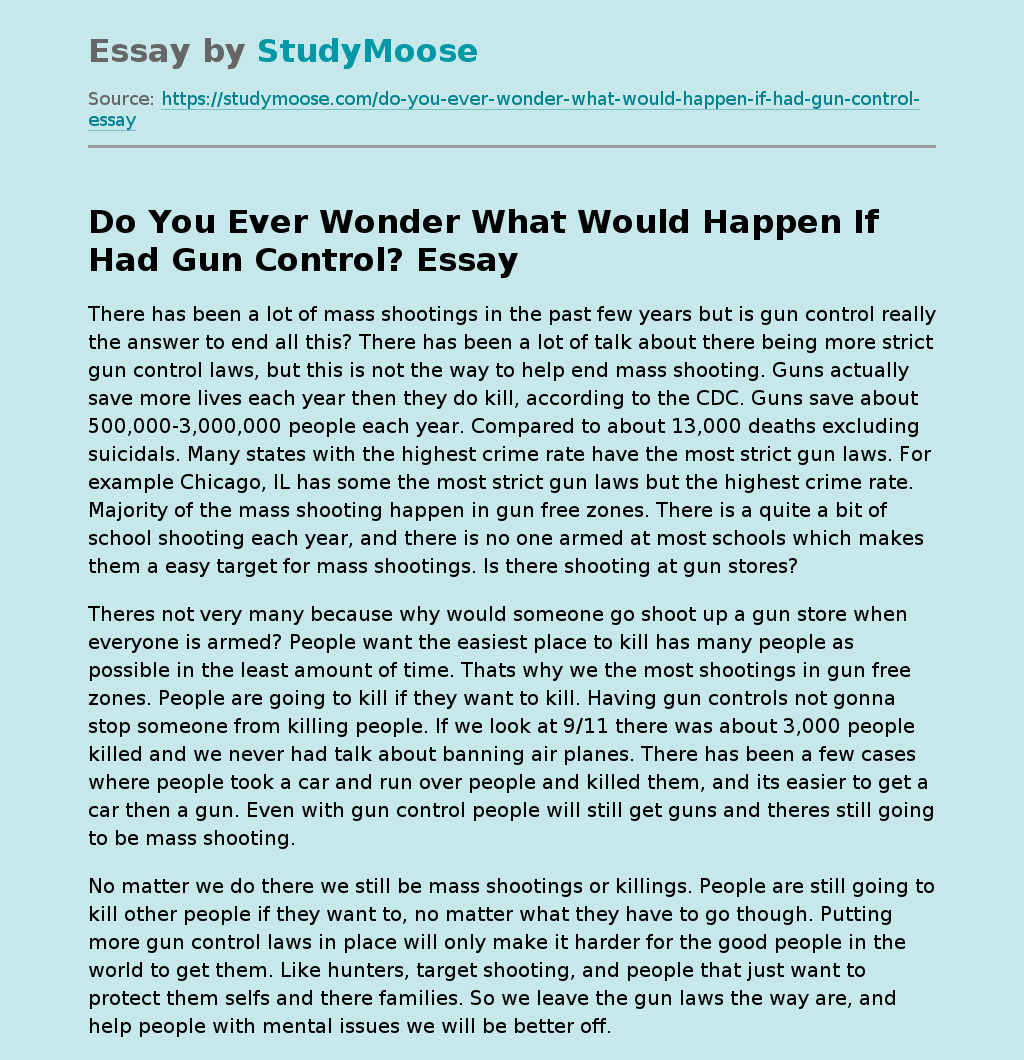