Do people deserve a second chance

Don't use plagiarized sources. Get your custom essay on
“ Do people deserve a second chance ”
Get custom paper
NEW! smart matching with writer

One of the best examples of getting a second chance was Raymond Carver. Having grown in a family with very limited financial resources and a father who was drinking, Raymond Carver was exposed to the unpleasantness at an early age. As he grew older, he started drinking himself. Eventually, the author battled alcoholism and was able to beat it. He was given a second chance in life. The honesty in Carver’s work undeniable; he was able to relate his struggles to his characters looking for a second chance, thus making his readers aware of the importance of giving people another chance to improve their lives.

A group of writers who formed the “Dirty Realism Writing School” became popular in 1980’s. They wrote stories on real life and their characters are deep in disappointment and tragedy. Raymond Carver one of the writer’s, who wrote as a master of minimalism, his writing technique creates a sense of uncertainty and he leaves the reader guessing.

Carver in his real life was not a minimalist: in fact it was ironic that he was the opposite, he was a walking tragedy, which showed in the “Cathedral” and “A Small, Good Thing.” The stories were simple and packed with deep emotional feelings, its gives the reader a true inner look at one self. This article will demonstrate that the author always left it to the readers to draw their own conclusions, his stories are similar to the way Carver lived his own life, having a Second Chance. (Comninos, Raymond Carver: A Writer’s life, 2009, p. 1)

One could only desire to look at the stories in “Beginners” and the ones in “What We Talk About” to recognize changes: the prose in “Beginners” to make up a compact collection of narration shattered by a flashed of dialogue; in “What We converse About” there is so much white space that some of the tales “After the Denim” look like a story in a mystery novel. In numerous cases, the man who didn’t permit editor to change his own work gutted Carver’s and on this subject Sklenicka voices a fury she is either reluctant or unable to rally on Maryann’s behalf calling Lish’s revising of Carver “a usurpation.” He enforced his own ideas on Carver’s stories, which Carver was credited was actually Lish’s deal. (Clark, 2013) In his interview with (Simpson, 2013). He spoke about his life and the experiences, he is usually thought of as a writer committed to a basically realist mode. The stories seemed to incorporate elements of authority or fiction. The fiction in his stories appears to reflect on itself and question its own status.. Raymond Carver stories are about historical events and relationships between fiction and the truth, its more truth than fiction.

The story “Put Yourself in my Shoe,” this is from his first volume “Will You Be Quit Please?” This story is about a writer someone like Carver, a person who was having a tough life, a failure, a drunk. Carver’s wife and two children were fed up with his drinking and couldn’t take it anymore, so when he moved to California his Maryann didn’t go. That was the end of his marriage and the beginning of his second life. Carver’s second chance at life and love came in 1977, he stopped drinking and he turned his life around, he wrote the “Cathedral” it is said to be the most important short story he wrote. He met his second disease; cancer. Which took his life in 1988? This interview helps me to understand the direct relationship between the story and the writer’s experience. He uses a great degree of experience, mix with imagination. His character comes alive with every word and I could relate to the events and the people in his stories.

At his second chance at life, his stories were often called a “slice of life.” It reveals a glimpse of the man his actual experience and not his imagination. “What We Talk When We Talk About Love” the story focus on two couples who thinks that they know the meaning of love, but actually they are confused about the true meaning of love. The story is based on the couples drinking gin and the whole conversation makes the character seems human. The more they drunk the more they seems not understand the meaning of love. Love may not have been defined but they understood that it would always be elusive. Carver’s stories are genuine,; it features a good beginning, middle and a conclusion that puts everyone who read the story in to a reality mode. With his former writing Carver could not move beyond the hopelessness of alcoholism.

He used alcohol as a means to escape reality and live within his self where there are no problems that need his attention and this shows, in “Cathedral” the story was written about alcoholism and alienation to a sorrowful self-awareness to become a reality of hope. “Cathedral” was about his second chance at life and it contributes to his great success. (Messer, 2012) I believe that Raymond Carver is realism and connected to the people on all levels. When Carver wrote about relationships, the characters connected with his readers.

I believed its more than just entertainment, to me it was a blasted of reality. The importance of giving people another chance to improve their lives, is one of the themes that the readers can pick up when looking at his literary work of Raymond Carver. He brought full circle not a narrate of alcoholism and alienation but sobriety and hoped, but the possibility for the a second chance. The “Cathedral” represents the artistic power and multifaceted undertaking as his most successful and realistic collection of short stories. I believe that the Cathedral” showed his willingness to compromise and get help, a turning point in his life “second chance”

Do people deserve a second chance. (2016, Aug 17). Retrieved from https://studymoose.com/do-people-deserve-a-second-chance-essay 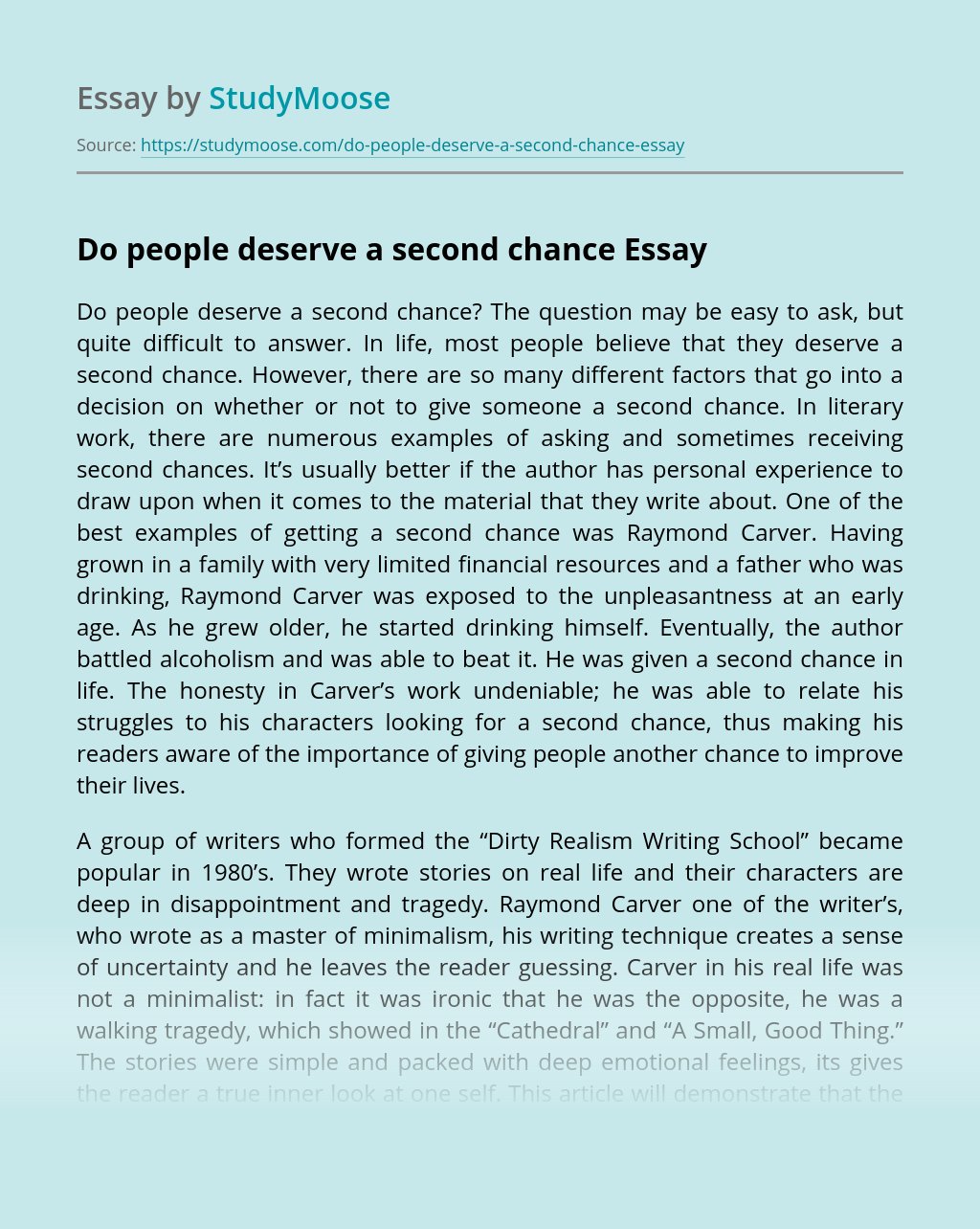