Divine Presence in the Iliad

The gods in Homers Iliad were more physically and visually involved throughout the story than in the movie Troy. The Iliad describes the gods intervening on behalf of various characters or for their own reasons. In Homers Iliad the gods used manipulation to give them an advantage so that outcomes could play into their favor. Characters were emotionally manipulated, the climate was changed and certain characters in battle were given an advantage over others to win battles. The gods were sinister in away.

Don't use plagiarized sources. Get your custom essay on
“ Divine Presence in the Iliad ”
Get custom paper
NEW! smart matching with writer

For example, during a battle, they would disguise themselves to trick a character from the story into making a distinct move they wanted them to make. The gods would physically trip a character to give the opponent a better standing. Now in the movie Troy the gods had no visible role, they were more of a belief system, similar to many people have today. The characters in the movie Troy believed that there were signs that occurred or would occur as an indication from the gods letting them know what actions to take.

In Homers Iliad the gods are clearly the central point to the book. The gods add more character and enjoyment to the story.

The gods play a role as an interesting and at times comedic side story with their insignificant arguments and fights. There is no doubt though that the Ancient Greeks truly believed that these gods would decide their glory and honor, which is in some ways very much the same ideas and beliefs we have today. It is truly amazing to see how some concepts over time fail to change.

The gods in The Iliad and are shown not only to have a direct hand in the lives of mortals but also, they are shown to be choosy about who they wish to help. The reasons behind their motivations and decisions aren’t based on any modern Christian notion of who “deserves” to have the honor “Greek religion embraced powers and fears of all kinds. As we have seen, its gods were within the world, one that they did not create. These powers—gods, nymphs, and other spirits—did not die (ordinarily) but were born. The Greek gods had favorite humans and intervened in human affairs, but they did not live within the human heart. They were powerful, but their power had limits. The gods occupy a strange role in the Iliad and the life of Achilles. “The gods do not meet the expectations of the human characters. They do support the Greeks, but for reasons that have nothing to do with morality. They love and they hate, but they never talk about justice. Thus the narrator gives us the impression that Troy must in any case fall, that the Trojans are victims of a power that men, however virtuous, cannot conquer”

Divine Presence in the Iliad. (2020, Oct 30). Retrieved from http://studymoose.com/divine-presence-in-the-iliad-essay 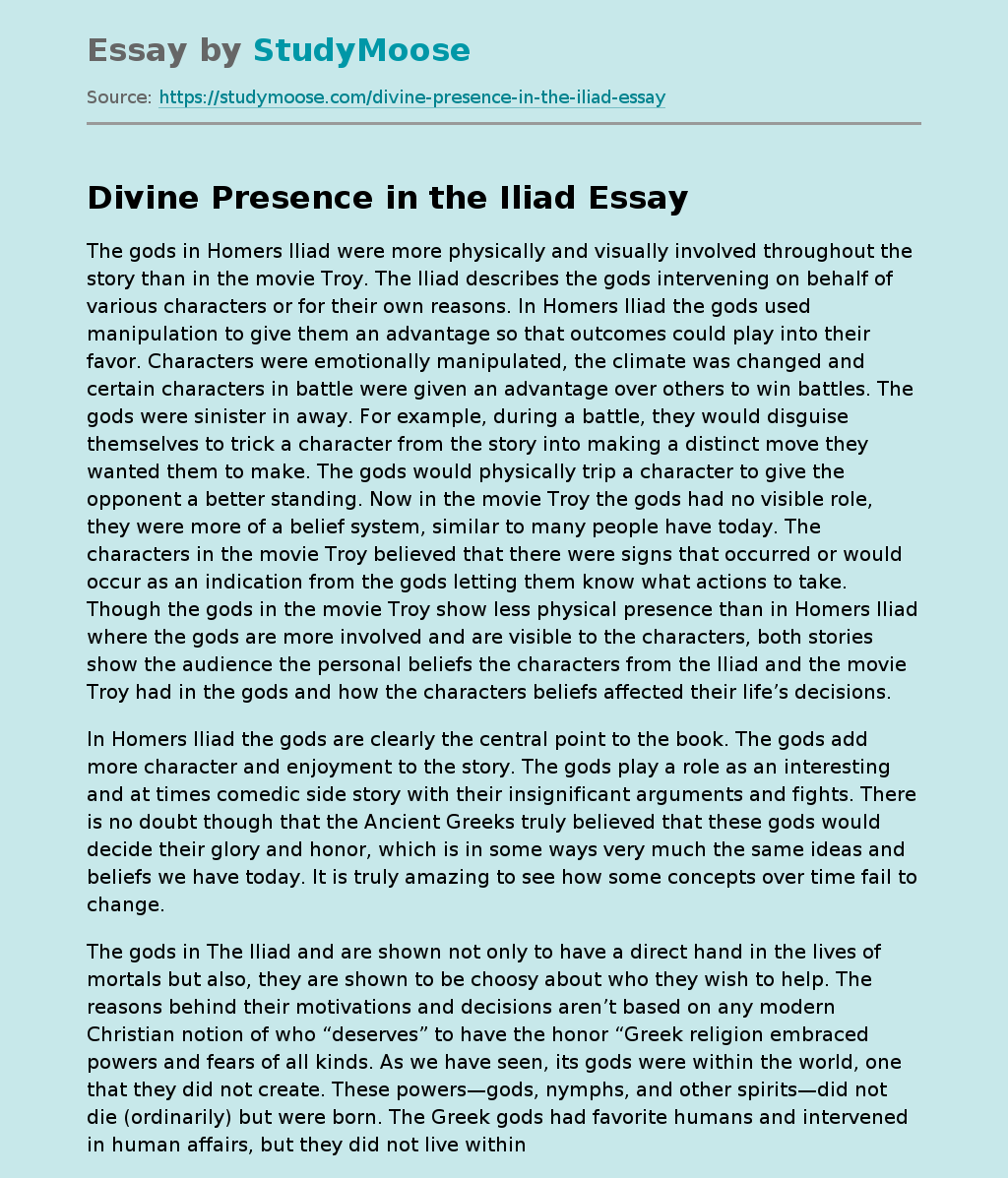