The novel “Divergent” written by author Veronica Roth is a thrilling story about the love and sacrifice of two teenagers (Tris and Four) living in dystopian America. This novel follows the hardship of citizens living in a community where everyone must be separated into groups called factions. The members of each faction must live their lives according to the value of their faction, whether it be Bravery for Dauntless, selflessness for Abnegation, knowledge for Erudite, honesty for Amity or peace for Candor.

Don't use plagiarized sources. Get your custom essay on
“ Divergent by Veronica Roth Response To Text Essay ”
Get custom paper
NEW! smart matching with writer

When each faction member turns 16 they must choose a faction they wish to live the rest of their lives in, whether they choose to remain in the faction of their birth or join a completely different faction is up to them. I found this novel to be very rich in important ideas or themes that can be closely linked to today’s world. Themes, such as love and sacrifice or separation of the social classes.

In this book I find it interesting how author Veronica Roth has managed to include today’s ways of social separations into this novel and emphasizes it to a point that shows all the “flaws” that there are in the way in which today’s society judges and separates everyone into different rankings on the social ladder.

The book shows that even though each faction is supposed to be equal to one another there is always one faction that believes they are better than the rest because they believe their way is the “right” way of life.

The Erudite faction believes that knowledge is power and because they have more knowledge than everyone else that they are superior. The feeling of superiority becomes more than just a feeling for the character Jeanine Mathews, head of the Erudite faction. She believes that because of their knowledge that they must rule the factions and remove those who she feels are “not worthy” for her new way of life. This aspect of the book greatly reminds me of Hitler and how he was aiming to achieve one master race. Hitler believed that the Jews were inferior and were considered less than human therefore he did not want them to be a part of his “master race.” Jeanine Mathews thought that the Abnegation faction was not worthy enough to be a part of her plan for a new community and way of life therefore she launched an attack on the Abnegation.

Throughout history you see many leaders, groups, races and religions trying to take the metaphorical throne of superiority and try to live above the rest of society. I believe that all of this is caused by one thing, separation. In today’s society no one is equal and we are all being discriminated against by each other. It is through our judgemental ways that we continue to stay separated. Even now if you look at the wars in countries such as Iraq, it is the separation of different religious beliefs that is causing many deaths. It became clear to me that, author Veronica Roth has similar views on seperation. I felt like this after reading her quote where she talks about the effects the separation of the factions had on some of the characters, “Because it forced people to become narrower, twisted versions of themselves, and they ripped each other apart.” This quote really does sums up what I believe the separation of the factions did to the character Jeanine Mathews. I think that this novel really depicts the theme of separation and the problems it causes in a strong way that really sends a message of equality to the reader.

This theme is not only prominent in this novel; the theme of separation plays a large part in other novels such as “The Hunger Games” trilogy written by Susanne Collins. In “The Hunger Games”, much like in “Divergent”, everyone is separated into 12 different districts with one district (The Capitol) ruling over the others. I believe that the idea of equality and how badly we need it is summarised by this quote from Joss Whedon, an American actor and director. “Equality is not a concept. It’s not something we should be striving for. It’s a necessity. Equality is like gravity. We need it to stand on this earth as men and women.” This quote points out that the human race will not be able to progress through life if we keep separating ourselves, discriminating others and putting ourselves in different groups. I feel that “Divergent” has really shown this in a way that really connects to the readers.

I have found that, author Veronica Roth, has really developed her characters throughout the plot of her book. She also shows the effects that one character can have on another and how other characters can influence the character development of another. It was the character Four that has really given me a sense of this development. At the beginning of this novel Four was portrayed as having a hard “exterior” and not having much emotion. It is not until the character Tris becomes a part of Four’s life, does he start to develop into a more affectionate character. As Tris and Four’s relationship grows into something more than student and instructor, you can see Four becoming softer and really starting to show his emotional side. Four has been living in the Dauntless faction since he left his birth faction (Abnegation) two years ago.

In the Dauntless faction the transfers from Abnegation are bullied just because they came from the faction that is least well off. Because Tris has also come from Abnegation that Four feels sympathy for her in the sense that he has had to go through the same “bullying.” Four feels that he can relate to her because of this and I think that it is this that really kicks off their relationship and is why Tris and Four become such a strong pairing. By Four finally being able to relate to someone, he feels that he can open up to Tris and “lower his walls.” This really shows how the character Tris has had an impact on Four and how Tris has developed Four into a “two dimensional” character by bringing out his softer sides. This change in Four is not only noted by the readers but even by some of the characters in the book. This is told when the character “Christina” says to Four “The person you became with her is worth being.” This quote really shows that it was Tris that has changed Four and that this change is a positive one. The idea that a person can influence a change in another is not just something that happens in books but in reality too.

It doesn’t always have to be a person that you know that can influence a change in someone’s life. It is quite often that, celebrities or other public figures that can influence a change. For example, when I was going through a tough time in my life, it wasn’t family members or friends that helped me through it but the supportive words of celebrities I look up too. Again it was all about connecting with someone who you can relate to. In my case it was my favourite musician. This musician had been through similar things and I felt as if they understood, even though we had not met, let alone even spoken to each other. This also shows what a big influence media has on people of today’s society. The media’s opinion and views on how people should live their life are everywhere; in magazines, television shows and on social media and are hard to be ignored. So it is not only people that can influence a change in someone’s life but other things such as media.

To conclude, “Divergent” is an exciting novel that is rich in themes and will keep the reader on the edge of his or her seat. The theme of separation showed many links to today’s society and even to events in history, as well as pointing out many problems that occur with separation in our society. Veronica Roth has not only given a huge amount of depth to her themes in this novel, but has been able to develop her characters throughout the story, morphing them from what you would call a “one dimensional” character into a “two dimensional” character. A character, with more than one side to them. This novel has really made me think that how, as an individual, can I not take part in this separation.

Whether it is separation of social classes, religious groups or even the separation of people through lifestyle, I believe that everyone should be viewed as equal and not be discriminated against. This novel has also shown me (through the character development of Four and how the character Tris influenced this development ) that people or other things that we find we can relate to or care about, can play a large role and influence some of the personal choices we make as well as influence how we grow as people. Veronica Roth has written this novel in a way that really gets the reader thinking about the themes and/or main ideas as well show important links in these themes and ideas that can relate to the outside world. 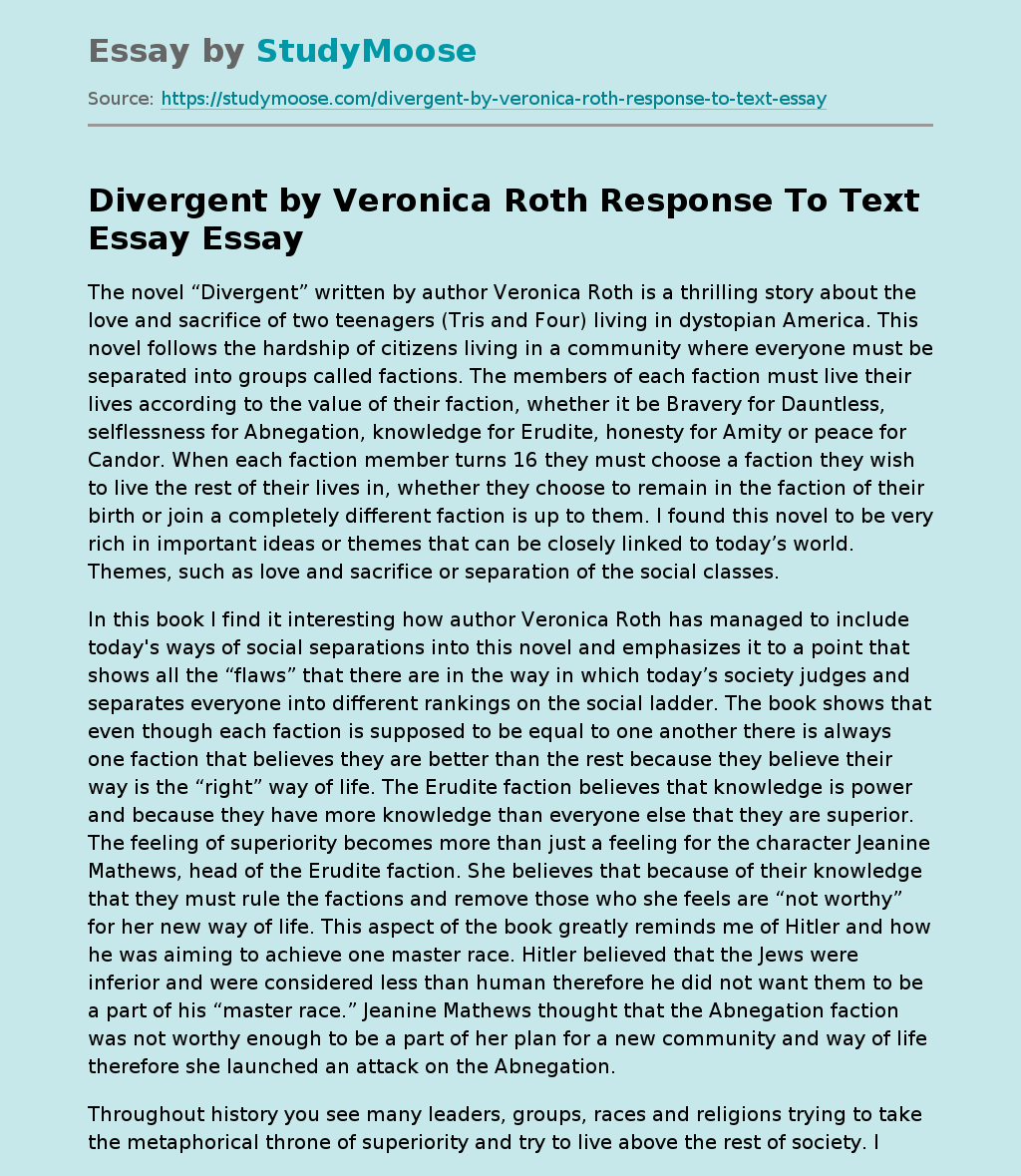