Did Disraeli achieve his aims in his social reforms 1874-80?

Disraeli’s government of 1874-1880 has been described as ‘responsible for one of the most notable instalments of social reform of the century’1, and in the time since this ministry, he has become associated with social reform and the ‘elevation of the condition of the people’2. However there is some debate amongst historians regarding his reforms, in terms of Disraeli’s motivations behind implementing his reforms; the methods by which he put them into place; and how successful they were, both in the short and long term.

Don't use plagiarized sources. Get your custom essay on
“ Did Disraeli achieve his aims in his social reforms 1874-80? ”
Get custom paper
NEW! smart matching with writer

Blake emphasises the fact that the reforms were, on balance, successful ‘they did a great deal more good than harm’3, as well as Walton ‘what he [Disraeli] did do was very important indeed, and it even made a difference, however small, to the living conditions of some of those at whom the legislation is directed’4, however Smith would argue that more of the reforms were weak than were useful, calling the Merchant Shipping and Friendly Societies Act ‘lame’, and saying that many of the reforms were ‘too tentative and weak adequately to subdue the problems with which they were concerned’5.

It is also interesting to evaluate whether Disraeli’s aims came from deep seated personal convictions and planning or whether his reforms represent, as the historian P. Smith called it, ‘the haphazard production of piecemeal reforms, whose timing and details were dictated by the pressures and circumstances of the hour’. In order to examine to what extent the reforms were successful, it is important to examine Disraeli’s aims regarding social form and how far the reforms which he implemented fulfilled these aims.

Disraeli’s aims in terms of his domestic policy can be summated into three main statements: to win over the working classes; to protect the propertied classes from too much change from reform; and to build a stronger nation as a whole, which he would lead into greater prosperity as Prime Minister.

Disraeli’s aim to win over the working classes was arguably his main aim, especially when one examines his speeches from the early eighteen seventies. This relates to Disraeli’s desire to get elected, and as he was aware of the newly-enfranchised working classes (following the 1867 Reform act), he realised that it was important to appeal to them in terms of his policies outlined in his election campaign. As asserted by Blake: ‘as a result of the Act of 1867 it was electorally necessary to make some concessions to working class demands…and…these demands had become more articulate.’6

The last of Disraeli’s main aims, that of creating a strong nation under his leadership, underpins not only all of his domestic policies, but also his foreign policies. This was a major aim for Disraeli, and can be exemplified in many of his social reforms, for example the Education Act (1876), in which he attempted to improve the condition of the country through increasing the quality of education available to the nation, and as a consequence improving literacy.

The first of Disraeli’s aims was that of appealing to the working classes. Whether or not he was successful in this aim within his program of reform is a point of debate amongst historians, for example Smith who has argued that the permissive nature of the reforms meant that they made no significant difference to the attitudes of the working classes ‘The reforming years of Disraeli saw no drawing together of party and of people’7. However there were some acts which gained popularity among the working class. An example of this is the Conspiracy and Protection of Property act of 1875. This is an example, as Patterson says, of Disraeli’s government ‘amending an unpopular Gladstone Act in a popular decision’8. According to Blake, this was also an effective piece of legislation, as it ‘settled the question of labour for a generation’. Disraeli is also quoted as saying that this Act ‘will gain and retain for the Conservatives the lasting affection of the working classes’9. As Blake has asserted, Disraeli was aware of the need to retain the support of the newly-enfranchised working classes by specifically tailoring some of his legislation to them. Smith agrees with this point, and like Blake asserts Disraeli’s grasp of the popular view that ‘social measures… were accepted as an essential insurance against the dangerous fermentation of working-class discontents’.10 This shows there is a certain amount of agreement among some historians about the need to appease the working class, although there has been some disagreement on the effectiveness of the reforms introduced in fulfilling this aim, which can be exemplified in the claim by Feuchtwanger that there were many things more present in the minds of the working class than the reforms: ‘In 1875 the case of the Tichbourne claimant caused greater popular excitement than the social reform legislation’. The fact that a false claimant to titles had attracted more public interest than the enormous amount of legislation being put through by the government shows the limited effectiveness of the reforms in fulfilling this aim. 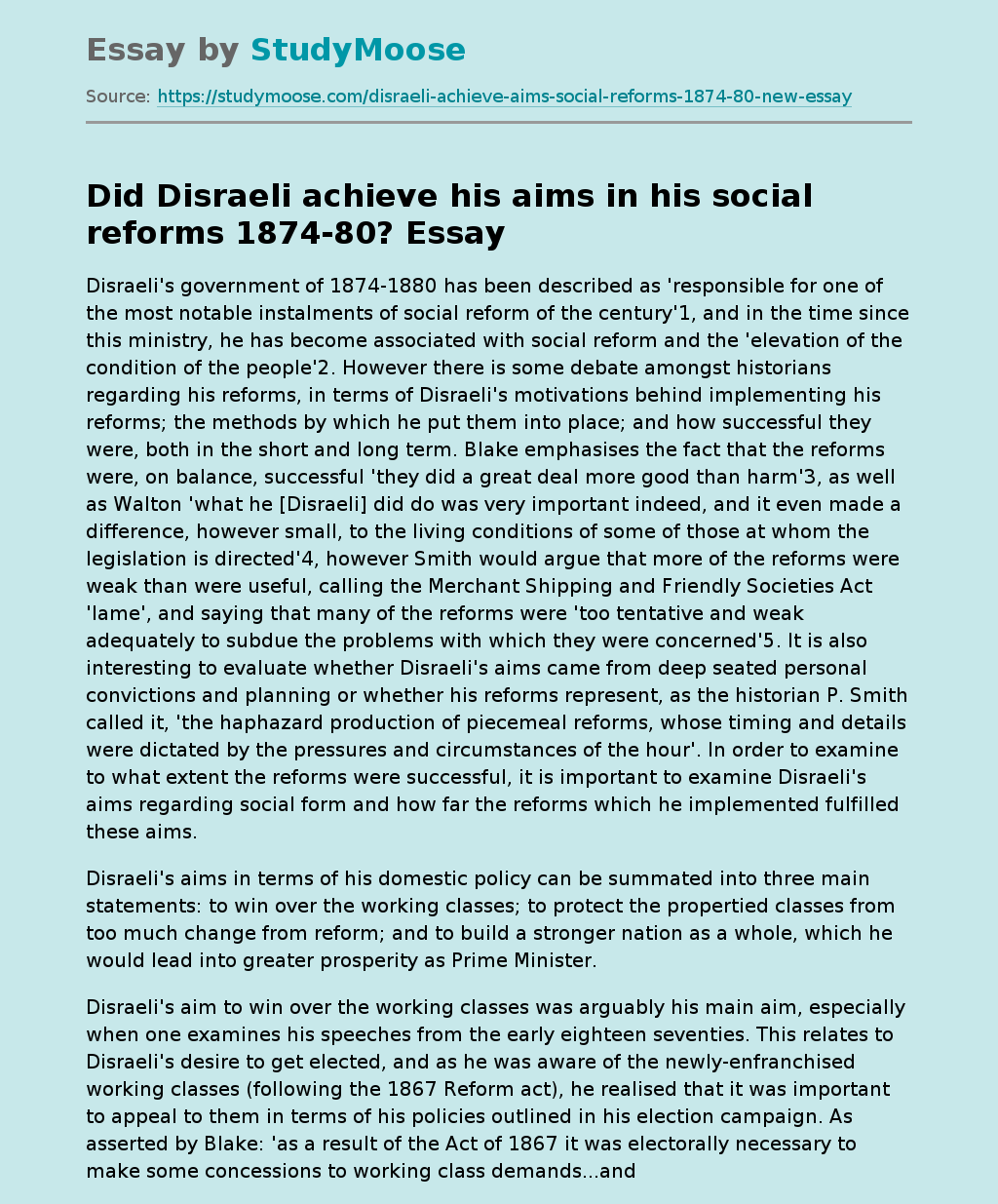