Discuss the validity of Hobbes's depiction of the State of Nature

The theory of the ‘state of nature’ was proposed by the political theorist Thomas Hobbes which he first discussed in his book Leviathan.

Don't use plagiarized sources. Get your custom essay on
“ Discuss the validity of Hobbes’s depiction of the State of Nature ”
Get custom paper
NEW! smart matching with writer

The state of Nature suggests that there was at one time a state of “Anarchism,” a society without king or ruler in continuous war and violence. Before government and the invention of law and society as we know it today. Hobbes describes it in his book Leviathan as

‘A Time men live without a common Power to keep them all in awe, they are in a condition which is called Warre; and such a warre, as is of every man, against every man.

. . . In such condition, there is no place for industry . . . no Culture of the Earth… no Knowledge of the face of the Earth; no account of Time; no Arts; no Letters; no Society; and which is worst of all, continual feare, and danger of violent death; And the life of man, solitary … and short’

Hobbes State of Nature is only a fictional deduction of what human nature may have been like before civilization in other words, a hypothetical existence prior to any civilization [1].

Hobbes never suggested that the State of Nature ever occurred in the history of humanity. However he does discuss that it is a reality to a degree the “savage people of America,” he says, and “Europeans approach it in times of civil war”.

DOESN’T MAKE SENSE YOU HAVENT EXPLIAINED WHAT THESE QOUTES MEAN. POSSIBLY JUST TAKE THEM OUT!

Evidence to support Hobbe’s theory can be seen in humans’ natural condition. In A human beings ability to mistrust of others, criminal behaviour or politically speaking the tendency of stronger countries to dominate weaker countries financially or politically inferior to them. [2]

Hobbes suggested that man is simply ‘a walking bundle of desire or appetite, all seeking ways to satisfy those desires’ [4]. The only thing preventing us from for filling those desires and satisfying our appetites are others who have competing desires. However Hobbes viewed all human beings as equal, ‘Nature hath made men so equal.'[5]

Of course some are stronger than others and some smarter but Hobbes points out that the strong can be out witted by the smart and the smart overpowered by the strong and we all have to rest at some point thus making us equally vulnerable. For Hobbes this equality means that we all have an equal chance of fulfilling our desires. Read about anarchists demand the impossible

Hobbes makes it clear that The State of Nature is some thing we should avoid rather than a ‘solitary, poore, nasty, brutish, and short life’ and we should seek a state of peace ‘every man, ought to endeavor Peace’. Hobbes proposes that to get out of The State of Nature we should give up all our rights except for the natural right of self preservation; to a sovereign or the “leviathan” who has unconditional and unified authority. [6]

Now to address the question of whether or not the Hobbesian theory on ‘State of Nature’ is convincing; it does have some validity in modern society as Roberts and Sutch point out that, ‘…it has obviously stood up well enough. If generations of scholars had thought it ridiculous we wouldn’t be considering it now.’ [7] In the nineteenth century Utilitatrians took interest in Hobbes work especially academic James Mill, who was intrigued by Hobbes’s, “unsentimental account of human nature and realistic discussions of sovereignty and law”. Mills agreed with Hobbes view that human nature inclines men to war and therefore need ‘a common power to keep them in awe’ [8].

Hobbes had an egoistical view of human beings in the sense that we are only motivated by self interest, this interpretation of human nature as been heavily criticized by many including A.E Taylor, who suggested a contrasting deontological moral theory to Hobbes work; which is the duty to keep promises to one another.[9]

The idea of a sovereign has also heavily criticized as Hobbes fails to consider whether we have any obligation to obey a sovereign. Hobbes’s suggestions for an absolutism society where the sovereign will judge all moral and political matters and enforce those judgments. These suggestions are not only weak; they are simply refuted by the relatively successful distribution of powers in modern liberal societies such as Britain. Also the idea that responsibility of governing a whole nation should be invested in an individual is contested by the horrific crimes of twentieth century dictatorships, which show beyond doubt that judgment about right and wrong cannot be a question only for our political leaders.[10]

According to Hobbes we all have violence rooted inside us and in order to repress violence towards each other we should organise ourselves into a “civilization.” But these views are contested by Zygmunt Baumen in his book, Modernity and the Holocaust where he suggested that man naturally has something called “Animal Pity” which prevents close contact violence but allows us to kill on a larger scale at a distance where we do not see our individual victims. An example of this would be modern day missiles, which allow armies to massacre masses of people without having to look them in the eye. To put it in simpler terms,

This idea of “animal pity” is also supported by research into World War II where it was found only 15-20% of American soldiers actually fired at the enemy while the majority of the army fired in the air. [12]

In conclusion Hobbes State of Nature can in some aspects be reflected in the real modern world as many people will be prepared to use violence to satisfy their “appetites” especially if there’s no government or police to control them. Secondly, in some situations we may resort to violence if our lives seem to be at stake, for instance; if we perceive someone as a deadly threat, we may well want to attack first, while his or her guard is down. If a person was to see lots potential attackers then that could give them a reputation of being an aggressive person, this relates to Hobbes idea of the “vainglorious” Man.

REWORDED THIS FOR YOU I THINK IT SOUNDS A BIT BETTER.

As Hobbes puts it, “the wickedness of bad men also compels good men to have recourse, for their own protection, to the virtues of war, which are violence and fraud.”

Hobbes idea of absolutism can be seen in countries where a communist/ totalitarian regime is in place thus giving some weight to his theory but Hobbes believed that the sovereign “could be trusted and would not abuse their power and conduct themselves in a way which is only beneficial to their people. However this concept fails as evident in the modern world that people can easily be corrupted by power with leaders like Hitler and Saddam Hussian. Hobbes egoistic view that man is simply a selfish of being is questionable as man is a sexual being with the desire to mate with the desire to find a partner and even start a family meaning we are born with some morality and passion toward others. [13]

Finally some of Hobbes concepts are contradictory as he suggests people have a “rational desire ” to make war, this would result in a vicious circle which would impossible to break. Hobbes also proposed there is a “common power” to enforce co-operation between human beings, if this were to exist there would be no need for a sovreign. Although some of Hobbes theories are valid they do become questionable once put into historical and political context.

Discuss the validity of Hobbes's depiction of the State of Nature. (2020, Jun 01). Retrieved from http://studymoose.com/discuss-validity-hobbess-depiction-state-nature-new-essay 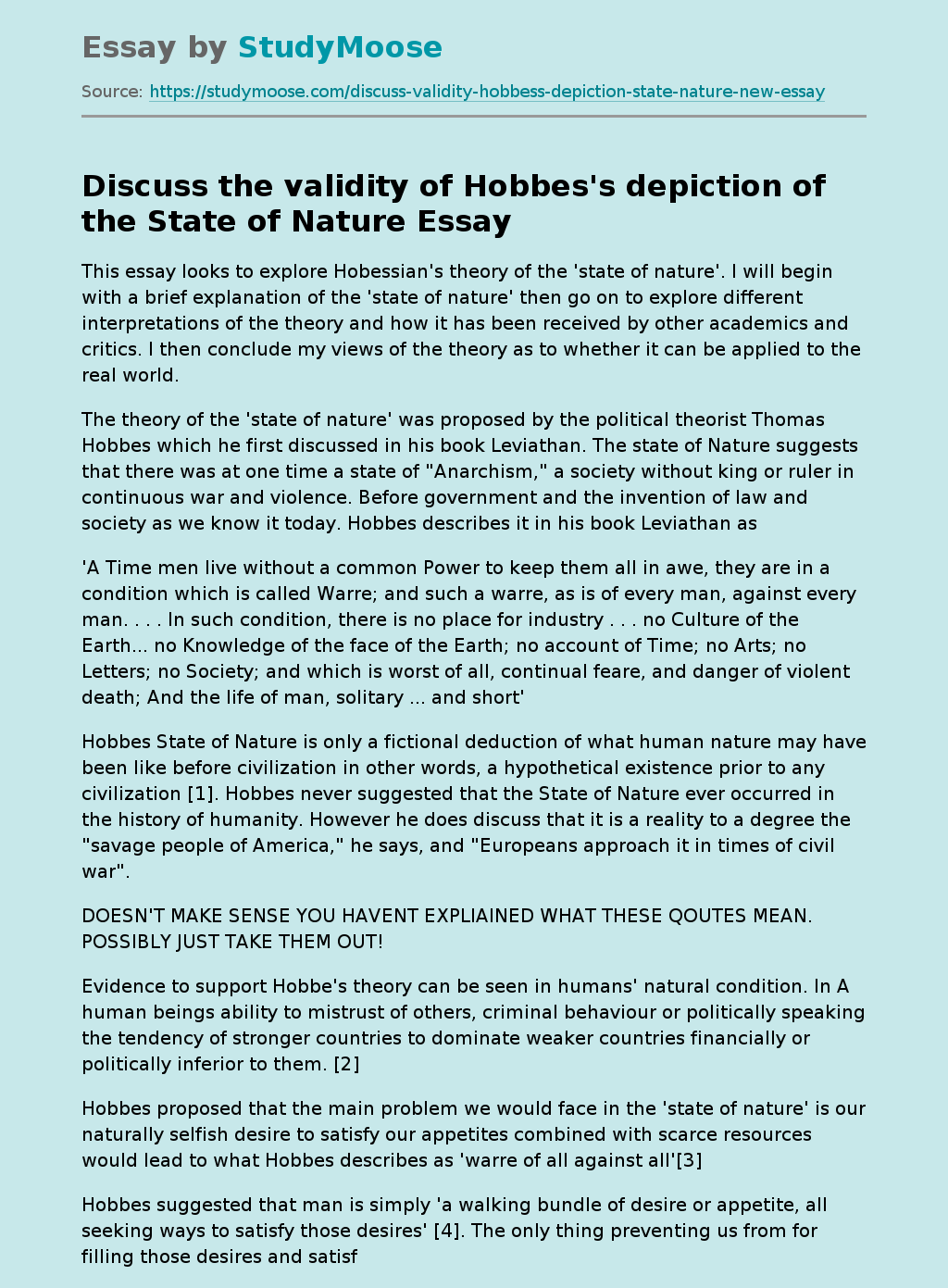