It is argued nowadays on whether teenagers, who go to school, should be wearing a uniform. There are many advantages but also some disadvantages, such as : All the students wearing the same uniform , which can take the stress off looking better than other students as they are wearing similar attire, and also having a uniform can make a person look smart and respectable, but on the other hand, students can feel that their uniforms are too boring and doesn’t show their personailty or their style well enough, and that for certain schools, uniforms can be expensive, especially if it is a larger family they are being bought for.

Don't use plagiarized sources. Get your custom essay on
“ Discursive Essay ”
Get custom paper
NEW! smart matching with writer

An advantage of uniforms would be that, all the students are wearing similar clothing, so no-one will feel as if they don’t look good enough or that they have to impress anyone.

Students would probably feel this way if it were a non-uniform school, and would be under stress trying to buy new clothes every week or month to impress their classmates.

So having a uniform is beneficial to certain people as they may not be as well off as other and won’t be able to afford new clothes all the time. I think this is a very strong point as i agree that students wouldn’t feel pressured to impress their friends with new clothes, and that their parents would save a fortune with a uniform as uniforms only have to be renewed every month or so.

Another advantage of uniforms would be that they look smart and respectable, which can give the impression that the student goes to a great school, and that he/she is quite intelligent. Furthermore, some schools that don’t have a dress code, their pupils look casual and it doesn’t look like they even go to school. In addition to that, when schools have a non-uniform day, it can be more exciting because its a day where they can show off their non-school clothes. I strongly agree with this point because students do look more sensible in a uniform rather than casual attire, and i also agree that, when schools do have a non-uniform day, they want to look nice and show off their designer clothes, where as, at a school which has no dress code, they have probably already worn their designer clothes to school, so they would resort to buying even more clothes to impress, which will cost a fortune.

Which brings me to my next and final point on the advantages of having a uniform, The cost. Some private schools uniforms may cost considerably more but would you rather pay for a full uniform at a dear price, or buy new clothes every week or two for around the same price range, or more? Most public school uniforms don’t cost an incredible amount, and only have to be renewed after a month or two. I do agree with this point as it is true about having to buy new clothes all the time would cost an awful lot, and that you could buy a full uniform for around the same price.

Uniforms may be good in some ways, but some students strongly dislike them for multiple reasons.

One disadvantage of uniforms would be the image. The first though that comes into a students head when they see a uniform is that, they look boring, and the reason for this is understandable as uniforms usually consist of one, two, or maybe even three colours, but these colours are usually neutral, boring colours that aren’t very eye catching. But you never really see a uniform that has colours like bright yellow or even multiple colours that would definately make you stand out from the crowd. I do agree with this point very much as uniforms can be extremely dull and boring looking, and wearing a uniform that has colours such as brown or black would probably make you feel quite depressed and unhappy, and i also think that there should be much more colourful uniforms that stand out more.

Another disadvantage of uniforms would be the type of clothings schools make you wear, such as skirts. Skirts at any length can make any girl feel uncomfortable, no matter how big or small the girls are. The reason for this is because they may have to show their legs, by wearing knee-high socks, or even wearing tights can be uncomfortable for them as their not used to wearing skirts. In addition to that, when it gets into the winter period, some girls are still forced to wear skirts, even when the temperatures are below 0’C I strongly agree with this, as girls should be aloud to choose whether they wish to wear trousers or a skirt, and i also believe that it is wrong to force girls to wear skirts in the winter period, as they will be freezing going to school.

My final disadvantage of uniforms would be that they can hide a students personality, their style, and who they really are, and this really irritates students if the teachers are too strict and will not allow simple jewellery, accessories or extra clothing. I strongly agree with this statement as its true that students should be able to show how unique they are and show their personalities through the way that they dress. Even if its a few extra peircings or a bright hair dye, students should be able to do so as trying different things and styles is part of growing up. Having a uniform prevents this.

In conclusion, i believe students should be able to wear whatever they wish to school, and not have to wear a uniform. I say this because uniforms are extremeley boring and depressing if they consist of one, dark, dull colour. And i agree that if the school is very strict about what the students are wearing to school, it can hide the students personality or how unique they are. 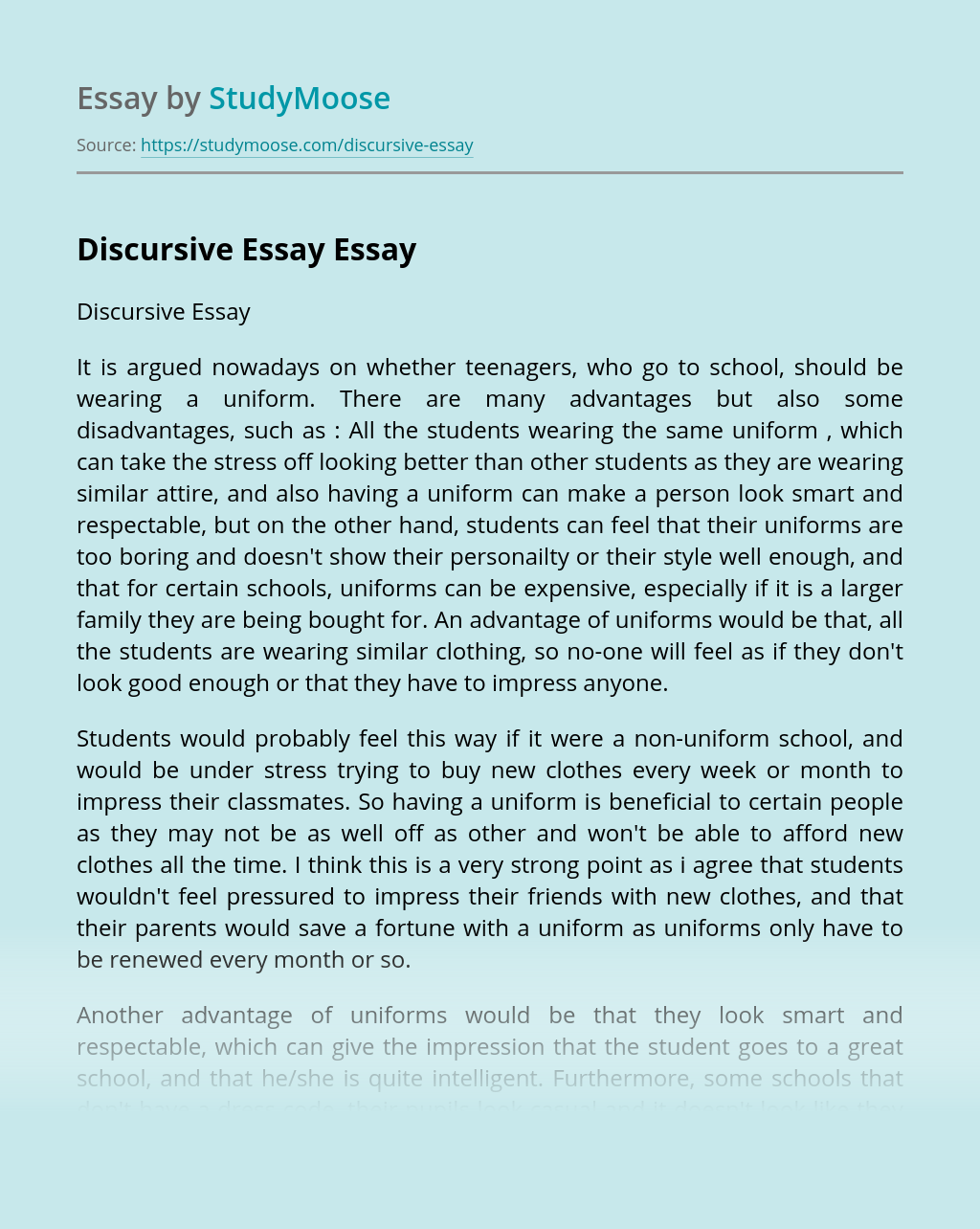