Analyse the Statement that Advertisements for recent college graduates are generally in violation of Age Discrimination. Introduction In olden times there were no restrictions on an employer freedom to decide whether to hire a particular individual or from a particular group. (Smith & Thomas 1996) as posited by Lord Davey in Allen v. Flood. an employer may refuse to employ (an individual) for the most mistaken, capricious, malicious or morally reprehensible motives that can be conceived, but (that individual) has no right of action) against him”.

Don't use plagiarized sources. Get your custom essay on
“ Discriminatory Job Advertisements ”
Get custom paper
NEW! smart matching with writer

Gradually as time evolved, the employment practices changed and became more receptive to non-discriminatory practices. This relaxation and acceptance were forged through legal battles and the enactment of Employment Laws. It is of the essence of all discrimination that a person, or group of people is treated differently from others in a similar position for a reason which should not be considered relevant. (Bowers & Honeyball, 1992). There have always been issues with employment practices by organizations. In some cases job advertisements are discriminatory in nature since they are specific requirements placed within them.

Whilst these requirements narrow the field of selection it is the discriminatory aspect that becomes contentious for the organization and leaves the prospective employee in a state of bother.

Direct is described as the most blatant form of racism or sexism which results person(s) being treated less than favourable on grounds of their gender, marital status, or racial grounds.

Such an advertisement is both directly and indirectly discriminatory notion stated therein, that entire line is being subtly discriminatory. In most parts of the world an high school graduate is either between the ages of 17 18 whilst similarly a college graduate is more often than not about is about the ages 22- 25. As in the decided case of Mrs M West v (1) Funky Owl Pub (Holdings) Limited and (2) Mike Coupe, Case Number 2415513/2018.Mrs West brought action against the owners of the Pub for Age Discrimination. The facts of the case are; Mrs. West aged 64 was employed by the Pub. The Pub temporarily closed to conduct renovation thus making Mrs. West temporarily redundant. On completion of the renovation the Pub placed advertisements via sign boards and on the owner and his friend Facebook page and on other websites seeking employees between the ages of 18 25. Mrs West wrote the owner asking for additional shifts on the Pubs re-opening to which the owner replied that she cannot gain re-employment. Hence she brought a discriminatory claim against the Pub. It was decided that:

That advertising for staff between the ages of 18 and 25 demonstrated an intention to discriminate against older workers by excluding them from consideration for the positions. Mrs. West was 64 at the material time, belonged to this group of older workers.

Funky Owl had applied a provision, criterion or practice (PCP) in its requirement that applicants for bar positions had to be aged between 18 and 25 and that this was indirectly discriminatory

This PCP put people sharing the claimant’s protected characteristic of age as an older worker at a particular disadvantage compared with workers of the younger age group identified in the advertisement. The employment tribunal found Mrs. West claims to be justifiable and awarded judgment in her favour.

The issue of discriminatory employment practices have attracted universal attention with adequate legislation being enacted to counteract same. Prospective employers therefore must be cognizant of this fact and take precautionary steps to avoid such violations. It is therefore imperative that even when posting job vacancies the recruitment message must be transparent as possible and avoid negative undertones as in the case of EOC V. Robertson (1980) as cited by ( Jefferson, 1994). 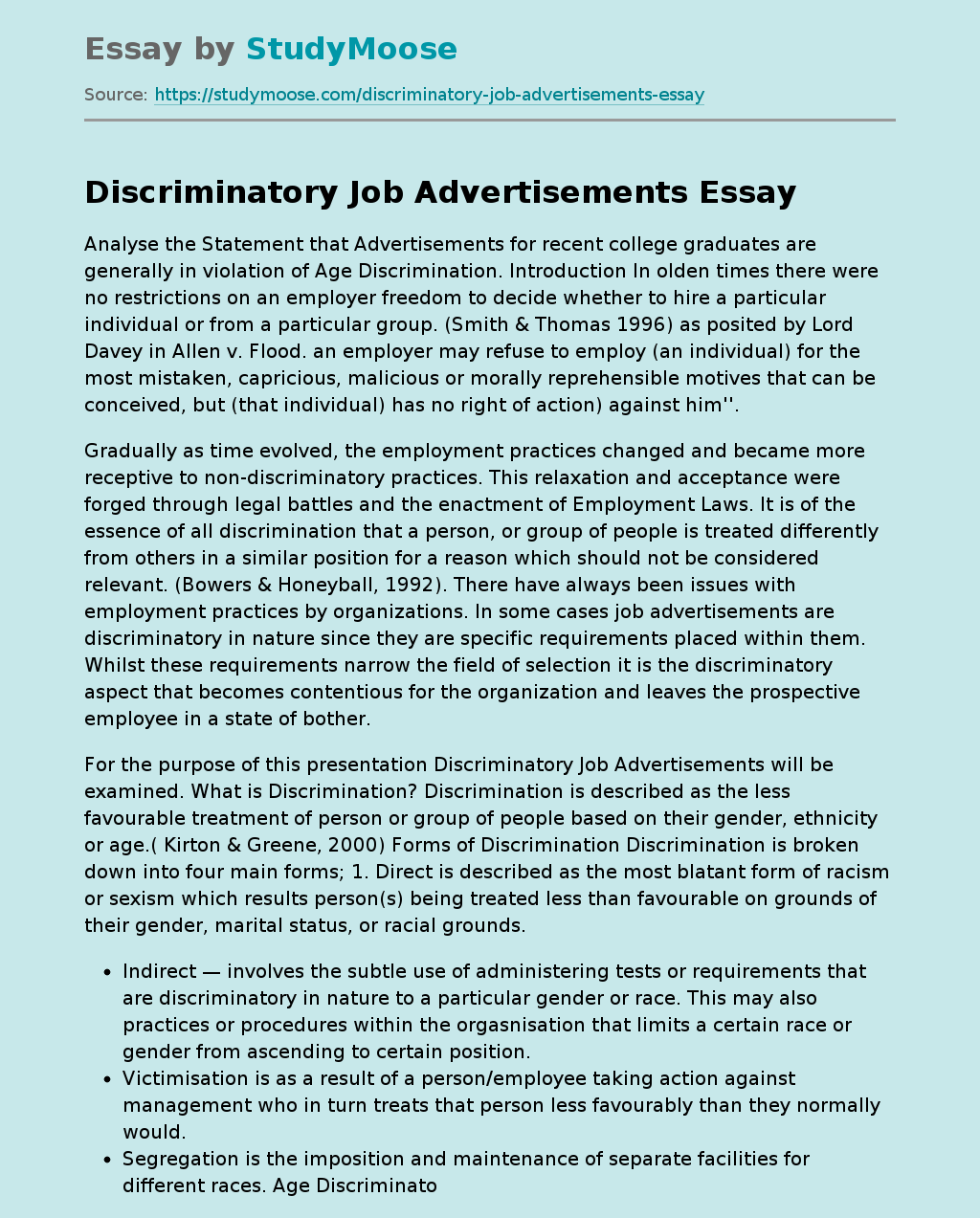