The United States of America, a melting pot of different cultures, religions, races and ethnicities. Despite being called “United” discrimination in America goes back to the beginning of the foundation of this country. America was built by the labor of African American slaves. After emancipation, African Americans were segregated based on the 1896 Supreme Court’s case “Plessy vs Ferguson” which made segregation constitutional as long as there were “Separate but equal” areas in facilities. This wasn’t the case as there were little to no accommodations to African Americans in established business’ and not nearly as the same quality of treatment as whites would get.

Don't use plagiarized sources. Get your custom essay on
“ Discrimination in America ”
Get custom paper
NEW! smart matching with writer

Thus making “Separate but equal” not equal. This led to various minority authors expressing their emotions on paper about this personal topic that affects their day to day lives and made them who they are today. In the literary works of Henry Louis Gates Jr, Brent Staples, and Judith Ortiz Cofer it is evident that the discrimination they faced throughout their years of living was the fuel to their flame that sprung their passion for their literary careers.

Racial slurs and name calling were and more discreetly in today’s age a common practice throughout Americas timeline of discrimination. Henry Louis Gates Jr., Professor of African American literature at Alphonse Fletcher University and director of the W.E.B. Dubois Center at Harvard University was born in the 1950s and grew up during the first stirrings of the civil rights movement. In the essay “What’s in a Name?” Gates writes about his first encounter with racism.

In the writing, he explains a time when Gate’s father greets the white Irish man Mr. Wilson and was perplexed with his response “Hello, George”.

A young and innocent Gates rapidly stops what he was doing and said to his father “Doesn’t he know your name, Daddy? Why don’t you tell him your name? your name isn’t George…” (Kirszner and Mandell 3). Upon finding out that the name George was a racial slur or how his mother puts it as “one of those things” five-year-old Gates responded by standing up to the racism in his own unique way by never looking at Mr. Wilson in the eyes again. An article similar to the premise of Gates’ essay, “Just Walk On By: A Black Man Ponders His Power To Alter Public Space” by Brent Staples he reflects on his experiences with racial profiling towards him when he was a graduate student.

In Staples’ article, he explains instances throughout his life that just by his presence and physical attributes he has faced discrimination. He examines how him being a tall, black man affects his daily life especially working as a journalist in a predominately white field. Staples describes his first experience in which he was discriminated against by a women as “My first victim” where he found himself close to her “late one evening on a deserted street in Hyde Park, a relatively affluent neighborhood” (Kirszner and Mandell 233) in Chicago and as he got onto the avenue behind her there appeared to a “uninflammatory” distance between them. Few glimpses later she was running and disappeared into a cross street.

Although frustrated for so often being taken for a criminal, Staples understands that “Women are particularly vulnerable to street violence” (Kirszner and Mandell 235) and “that the danger they perceive is not a hallucination.” (Kirszner and Mandell 235). For this same reason Staples began to take precautions to make himself look less threatening. From taking the subway when he has exchanged business clothes for jeans and whistling classical melodies whenever he goes on a walk. Staples wants to be perceived for who he really is. The act of assuming something of someone before truly knowing them can also be seen in Judith Ortiz Cofer’s essay “The Myth of the Latin Woman: I Just Met a Girl Named Maria”. Both minorities Cofer explains stereotypes she’s faced of Latin and Hispanic descent. 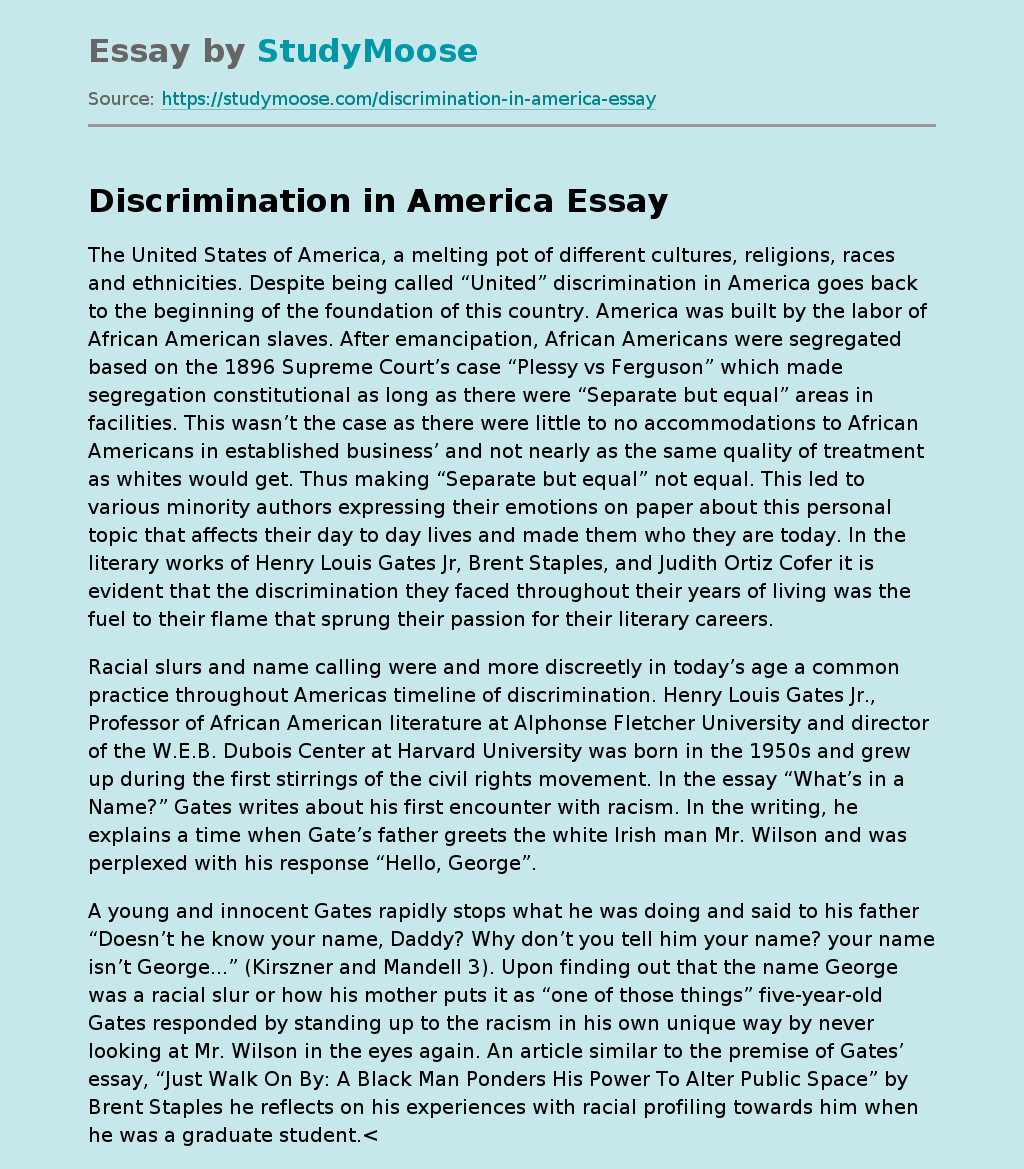