In order to be accepted into a discourse community, a person must learn typical ways people in that community communicate and argue. In this paper I will prove that I entered the discourse community of my high school soccer team by acquiring knowledge, establishing my credibility, and learning the game I love. In other words, I will be using the ethos, logos, and pathos appeals. I love to play soccer and watch the professionals who play on TV. I have played since I was ten years old and always played in a city league team.

Don't use plagiarized sources. Get your custom essay on
“ Discourse Community Analysis ”
Get custom paper
NEW! smart matching with writer

The requirements of being part of the team were simple but at the same time very hard.

I was recently part of my high school soccer team, the Crowley Eagles. People might have looked at us as just a regular soccer team, but we were a family that grew to love each other. From losing most games in the season to coming back and being undefeated we always stuck together.

In any community, members share knowledge and responsibilities. I knew that to be accepted as a member of the team I had to demonstrate my commitment as a team player, but I also had to draw on my knowledge and skills when communicating with other members of the community.

In other words, I used the logos and ethos appeals to convince the upper-class-men that I belonged For example, it all started my freshman year of high school. Incoming freshman really looked up to the upper-class-men. We wanted to be part of the team.

Like any other kind of sports team, the freshman always had to handle all of the dirty work. When it came to picking up trash, gathering all the balls, bringing out the waters, they were all responsibilities that we had according to the upper-class-men. If the team was in trouble it was the freshmen’s fault.

I guess this was kind of like a test to prove how much we were really committed to being part of the team. A member of a discourse community must learn to appeal to the emotions and values of other members of the community. There was so much talent in the program that the coaches really didn’t know who to put on varsity. In soccer you must be able to communicate with not only one, but with all of your team mates. This is something we worked on from the start. We communicated in many different ways such as training on a daily basis, to enduring a punishment together as a team.

Even calling each other out became a common way of communicating. Everyone in the team had to learn to collaborate with each other even if they didn’t like it. It seemed kind of pointless at first but it was all part of building chemistry with each other. It was difficult year after year loosing and gaining people to be able to accept new players in to our family. Coach King was one of the greatest coaches I have ever had. He came off as this mean and grumpy old man at first but we ended up changing how we viewed him. He made it clear to us that we just had understand his meaning of the word GAS.

GAS meant grades, attitude, and then skill. Grades of course were the most important thing because no pass no play was the rule. Most of the guys had no problems with this but there was quite a few that had some trouble. When one was struggling we all had to step up and help if we wanted to have a full squad for our next few games. We did many things to help them including getting help from tutors or teachers when in danger of failing. As the year went on, many obstacles were thrown at us and we counted on each other to get through them. A positive attitude is always better than a negative one.

Coach made it clear to us that he’d prefer a guy that cares about the team and is and alright player rather than a great player that only cares about himself. Guys who lead others in the right direction are always people to look up to. Some of the teams that I have been in have been very strict, in other words, if you don’t know how to play the sport the coaches wouldn’t even give you a chance to show what you got. This is different in a way that people didn’t understand why they weren’t chosen knowing they were better than others that were. I might have not been the best player but I knew what I was capable of.

I did my best to motivate myself and my teammates to not give up and live up to our potential. Coach made us understand how the appeal of ethos takes place in being part of the team. We would play depending on us. While we played we would think “ I got myself here”. We had gained the credibility to be part of the team. “Crowley boys soccer team falls short against El Paso Del Valle” were the headlines in the papers. I can’t even explain the feeling I got when the referee blew the final whistle. I felt mad and hopeless for not being able to have done anything for my team due to an injury that had happened to me the game before.

The other team had beaten us because of a small mistake. The tears started to roll down not only in my eyes but also in all of my brothers. This feeling of defeat and disappointed didn’t last long because we knew we were the first to get this far in more than ten years. It sucked knowing that our last game all together as a team would end like this. We were surprised to see how many people actually started to come out to support us. Most of the team were seniors meaning that the next season would be a whole new team.

I was a junior at the time and didn’t realize how close the team had really gotten to each other. I just knew I had to step it up for the next year. It was an amazing and emotional experience being part of this team. Many people remember the undefeated winning team that almost made it to the state championship but they don’t know how much hard work and determination it took to get there after having a really rough past season. We were tired of football and baseball having all the glory that we just wanted to step up. Everyone had to contribute to motivating themselves.

Even if it meant longer practices, harder workouts, and going through plays over and over again until we knew the true meaning of team communication. We started off as a losing team that didn’t get along with each other at all. Everyone had a big head over themselves and thought they were better than the others. We could have given up but we never did because we always had that dream in our heads to bring home that trophy and show everyone that didn’t believe in us that we did it. It took some time but we did it. We started 2 indoor teams so that we could get to know each other on the field better.

One team was made up of freshman and sophomores, and the other was made up of juniors and seniors. We split up the teams this way because that’s how we thought we would achieve our goal to have greater chemistry. Every once in a while on a Friday night we would have bonfires and the captains house just to bond together as a team. During these get togethers we would talk about how we could all improve to help out the team. We would reminisce on past games where we had achieved success and discussed on what we needed to work on to keep the good results coming in.

In the three previous paragraphs I use the appeals of logos and pathos. I showed the pathos appeal through sharing the experience of a defeat with my fellow discourse community members. I accomplish this through the specific allusion to the long journey that the team partook in to make it to that point in the season, leading to a stronger bond that came as a result of the struggle we shared. This enables the reader to see that that I use my appeal to both logos and pathos through the logical conclusion that through the shared struggles, we became closer as a community. This is one

of the greatest discourse communities I have ever been part of. Soccer made me work and communicate with a team, something that I would probably not have done on my own. To form part of this community, it takes commitment, dedication and time to build a strong relation between one and the community. An important thing about me being successful in this discourse community is that I really enjoyed it as well as all of the obstacles it comes with. Yes it was hard but as the times passed I developed skills and memories within the community that I know I will carry with me for the rest of my life. 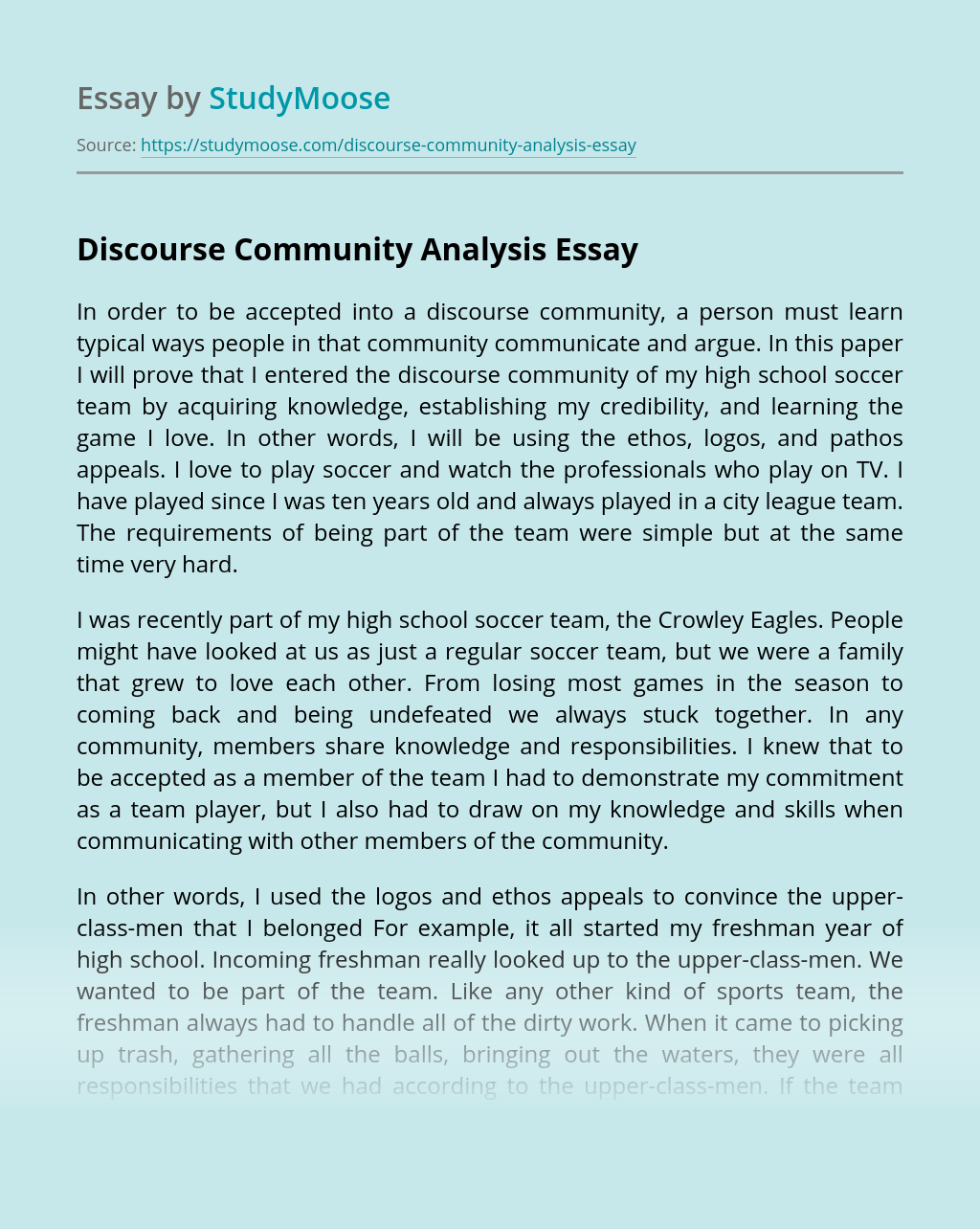