Identify and discuss the difficulties experienced in classifying extinct organisms and explain how classification of organisms can assist in developing a deeper understanding of past and present life in Australia.

There are many difficulties that are faced when classifying extinct organisms. Developments in the knowledge of past and present organisms have allowed a thorough understanding of the origins of life and the evolution of many living things1, the discovery of fossils and classification of these findings allows this knowledge to develop further.

Don't use plagiarized sources. Get your custom essay on
“ The difficulties experienced in classifying extinct organisms ”
Get custom paper
NEW! smart matching with writer

2 To determine what imperfectly preserved organisms look like scientists must undertake more research in order to finally classify the organisms from the evidence of the fossil. Further evidence can suggest a new finding about an organism previously not discovered, therefore causing some conjecture about the legitimacy of the organism’s history and consequently classification of the organism need to be re-evaluated.

The reconstruction of fossils may not always be correct. This means that many fossils of a certain organism need to be found, in order to correctly construct the shape of the organism.

If the organism has no current similar species, this makes the reconstruction much more difficult, as the rebuilding could be speculative. Any new evidence can change a certain theory about an organism. The features of the extinct species, including body covering and habitat can be misconstrued and ultimately resulting in the falsity of the history of the particular species.

Organisms that have no obvious living relatives can be classified. With microscopic technology, palaeontologists can look at the microscopic structure and chemical composition of the remains to determine if there is a living relative3. Without this technology the remains may never be classified. Also, radiographic technology has allowed researches to assist in the study of fossils. ‘In recent years the availability of high-resolution CT scanning has allowed researches to probe fossils encased in rock matrix, study internal anatomy otherwise not visible, and has been used to discredit fraudulent fossils’4 This technology was used in 1999, where a fossil named Archaeoraptor had claimed to demonstrate that birds and dinosaurs were closely related, this was proved otherwise with CT technology. By using DNA, two related organisms can be checked to see if they evolve from a common ancestor. This can assist with classifying organisms which do not appear to be related to other organisms.

There have been many changed to the biological classification systems due to advancements in technology.5 However the way in which an organism is classified remains the same. ‘Classification provides an extensive and well documented framework upon which new discoveries of life forms either past or present can be linked.’6 A Swedish botanist, Carolus Linnaeus created a system which would allow every organism to be classified in some way. The system he created was a hierarchy system, which contained Kingdom, Phylum, Class, Order, Family, Genus and Species. In this system, organisms become more similar the further along the levels. It is within a species where the organisms are most similar and where the organisms can interbreed.

Classification allows a greater understanding of past and present organisms. It represents evolutionary relationships and provides a system which allows one to compare and identify an organism.7 Classification orders and organises every organism that lives on earth. With each organism classified it allows identifying it much easier and simpler. The naming of every organism is universal. Each organism is given a name, usually in Latin, which is internationally accepted and used. This results in a lack of communication about certain organisms. Classification also allows a greater understanding of evolution. A classifying system which is used for this reason is called phylogenetic8. It can show the relationships between organisms where similarities and differences can be compared. 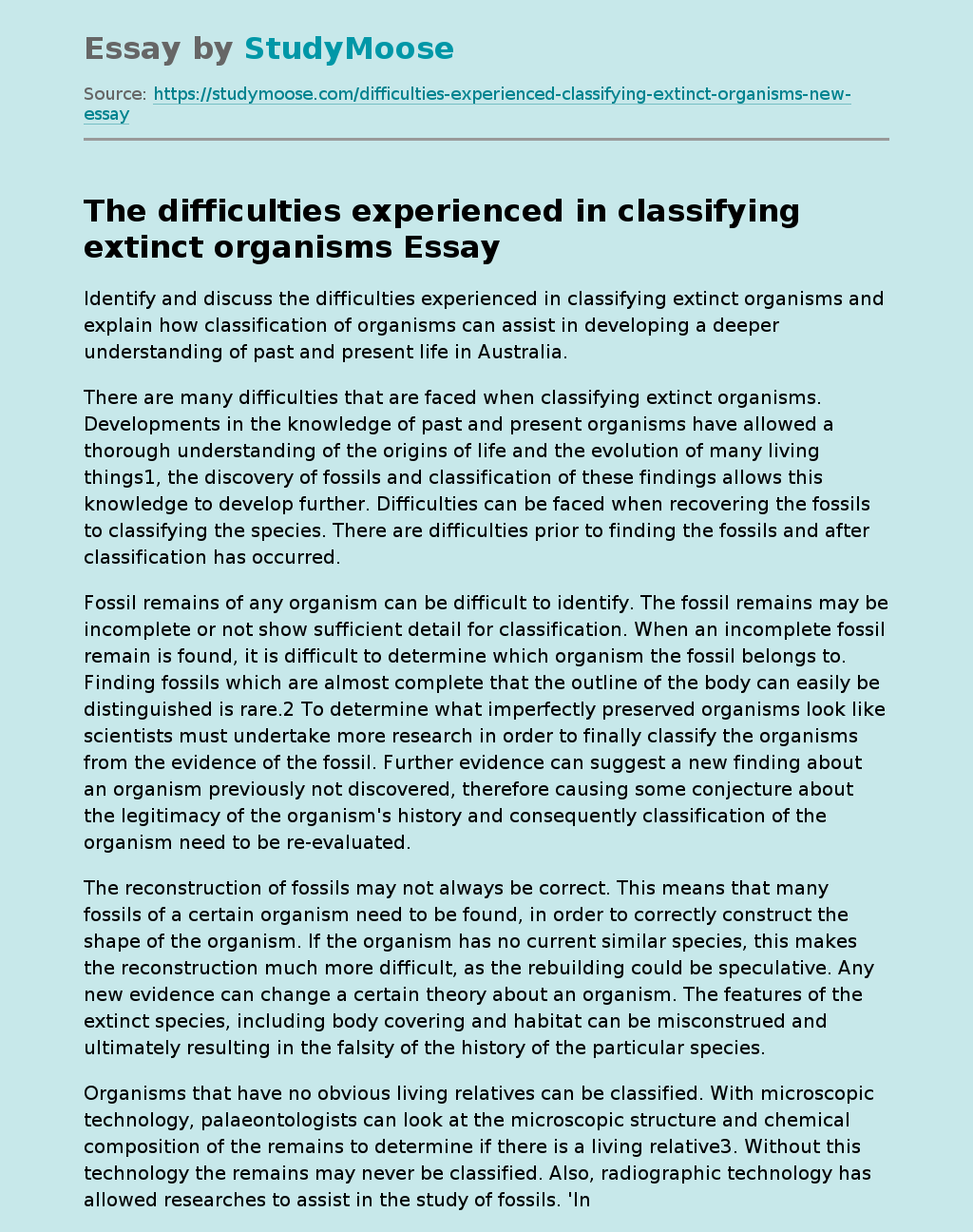