Differences between Iroquois and Pueblo Indians

Mercantilism: Economic practice common in Europe from the 16th to the 18th century. British and other imperial power’s policy to regulate the economy of their colonies. The policy prohibited the colonies to trade with other nations, monopolizing markets and banning the export of gold and silver. Mercantilism demanded that a nation must export more than it imports. Mercantilism was a cause of many wars and also the expansion of colonization.

Don't use plagiarized sources. Get your custom essay on
“ Differences between Iroquois and Pueblo Indians ”
Get custom paper
NEW! smart matching with writer

Penn was born on October 14th, 1644 and died in July 30th 1718. As a Quaker, he was a supporter of religious freedom and democracy. As a result of his different religious views in England, he was expelled from the church. In 1677, he became one of the founding fathers of the city of Philadelphia helping in its planning and development.

Quakers (Society of Friends): the Quakers lived in the mid 17th century in England. Many who did not want to follow the Christian Church because they had different spiritual and religious beliefs formed the group.

They believed in their “inner light”, which they believed to come directly from God. In order to follow their beliefs comfortably Quakers immigrated to America in the 1680’s. There they established in Rhode Island and Pennsylvania which tolerated Quakers.

Metacom: also called Metacomet, King Philip, or Philip of Pokanoket, was an intertribal leader of the Wampanoag and Narraganset. He was born in 1639 and died on the 12th august, 1676. He assumed the position of leader of the clan after his father Massasoit died and his older brother the following year.

He became the leader of the Wampanoag in King Philip’s War against English colonists in New England.

Glorious Revolution: also called the Revolution of 1688, resulted in the overthrow of James II and the assent of his daughter Mary II and her Dutch husband, William III of Orange. After the accession of James II in 1685, his
acceptance to Roman Catholicism alienated the majority of the population. This led William III to successfully invade England with a Dutch fleet and army, which led him to the English throne. The revolution lastingly ended any chance of Catholicism becoming re-established in England.

Iroquois and Pueblo Indian Similarities and Differences in the Colonization Era

The Pueblo Indians were the descendants of ancient villagers who had been settled in present day Arizona. After developing their settlements for over three thousand years a decline of these communities occurred probably because of drought. The survivors moved to the south and east and in these areas they progressed as they developed their communities and perfected their techniques of desert farming, irrigation systems to provide water for corn, beans, and cotton. They received the name of Pueblo Indians by the Spanish because when they arrived, these groups of Native Americans lived in small villages, or pueblos. The Pueblo Indians of the southwest were the first to be confronted by Europeans and their long lasting invasion. However, around 1680, the Pueblo Indians revolted against the Spanish and they expelled them for about 12 years.

Five main peoples, the Choctaw, Mohawk, Oneida, Cayuga, Seneca, and Onondaga formed the Iroquois. These five groups consolidated the Great League of Peace, which was created to bring stability to the area. The Iroquois were constantly moving geographically, they were known as being strong in battle and that is why they were one of the few Native Indians who survived the colonial invasion. Beginning in 1609, the Iroquois’ were forced to engage in war against the French, their Huron allies and other tribes. These wars were mainly the consequence of the battle of controlling the fur trade and land.

Pueblo Indian peoples were farmers in tradition, but as each of the Pueblo villages were in different demographic areas, the crops that were harvested were different. These crops were mostly corn, beans, and squash and these were stored for two or three years depending on the seasons. The Pueblo people hunted deer and antelope in the mountains and in other villages that were closer to the plains they hunted bison. In all Pueblo Indian societies, rabbit was an abundant source of proteins. The Iroquois on the other hand, had some similarities and differences from the Pueblo Indians in the farming and hunting practices. Iroquois people were farmers, fishers, hunters but their main source of food was through farming. Just like the Pueblo Indians, the Iroquois’ most cultivated crops were corn, beans and squash and they were also stored for later consumption. Concerning hunting, the differences are more notable. The Iroquois hunted mostly deer but they also sought beavers and muskrats in the winter. As they were located close to the river, they also had improved their ability to catch various types of fish.

The Pueblo Indian society was matrilineal in most cases, but differed in some, where in a few villages patrilineal clans existed, and males owned houses and land. Women did most of the farming, while men were in charge of the hunting. However, as hunting importance was reduced men also started to have a role in agriculture. Iroquois and Pueblo Indians’ role of women in their society, was similar in which they were both matrilineal, that they had the task to cultivate the land, and raise the children. However, in Iroquois society, women had more power, where they could choose to divorce their husband and order him to live the home with his belongings. Women also had the right to keep the children if a couple separated. The Iroquois established the Great Law of Deganawida, which gave equality to both sexes. In their society the women were the ones who elected the chief of their village and were also the ones who could remove him from his position.

The Iroquois had their main prophet, Deganawida, who they thought brought peace to the people. Their beliefs about creation were that in a supernatural way, spirits were integrated into the natural world. Their myth said that a girl in the spirit world who became pregnant without having intercourse had a vision that she had to uproot a tree so she would be able to see the underworld. As she does that, she falls to the natural world. As a result of their belief that the spiritual world was up in the heavens, the Iroquois first let their dead to be eaten by birds but after they begin to cremate the corpses so that their souls would go up to the pure, spirit world. In the other hand, according to the Pueblo Indians creation myth, they were guided by their God and climbed up through a hole in the earth into the sunlight. These people suffered many tragedies and misfortunes until God guided them to fertile land where they could finally settle down.

Pueblo people made ceremonies that took place in underground chamber, where they would practice rituals to cure diseases or to ask their God for good weather. They were also devoted to nature; they had rituals where they request nature for fertility and successful hunts and seasons. Just like the Iroquois they both had the myth that God had sent his twin sons to the natural world to create a balance with dualism.

The Iroquois people were one of the latest natives to have had encounters with the Europeans. This gave them way to develop more stable communities successfully. Since the arrival of the Europeans to the Americas, the Iroquois had developed a trading system which helped them acquire goods which were totally new to them. For example: knives and other hunting objects which made them more efficient. They had advanced armory and tools compared to other tribes but when it came to fighting with the Europeans, their chances were slim. The French had cutting-edge weaponry like armor made of metal, firearms, while the Iroquois had wooden armor and fought with bows and arrow, and other more traditional weapons. Even though they were known to have been strong in battle, when they had to confront the Europeans and their other Indian tribes, there was another aspect which made their battle even harder, diseases. Europeans had already been fighting against diseases such as smallpox, influenza and others, for which they had developed an immunity to them and also had ways to cure them. When they finally had contact with each other, these diseases started to spread with the killing bacteria.

On the other hand, the Iroquois, who had no knowledge of these diseases nor an immune system that could fight them, encountered themselves with an epidemic die-off of their people. The confrontations with the Europeans changed their ways of life because they had to find other ways to have stable communities.

The Pueblo Indians, who had been in contact with the Spanish for a much longer period of time, were part of a society in which the Europeans had strong influence. The Spanish had subjugated the natives and forced them to adopt Christianity as their religion. The power of the Spanish was very recognizable when they started to imprison and torture Pueblo Indians if they did not follow their rules. Nevertheless, the Spanish introduced farming and hunting techniques which helped the Indian communities grow and develop more rapidly. For three generations, native were oppressed until a leader named Pope organized a revolt against the Spanish. This rebellion was called the Pueblo Revolt. When it happened thousands of Indians joined forces and battled and forced the Spanish out of their territory, which they accomplished. After the expulsion of the Europeans, they restored their religious institutions, beliefs and more importantly established independence of their villages and pueblos.

While Iroquois and Pueblo Indian natives had many different views politically, religiously, socially and economically, they were both societies in which nature was devoted and revered. They lived of the land and this connected them to the Earth and its seasons greatly. They were spiritual people who believed that spirits had an important part in their lives and that they lived among them and saw their actions. As a consequence of these views, they intuitively knew how to differentiate the good from the bad, since they were being watched. They had no desire of economic power and their societies were mostly based on peace and equality, which differentiates significantly from the Europeans who were greedy and immoral. When they encountered with the Europeans their ways of life were altered forever and introduced a new era in which Christianity had a big influence and with it other more capitalistic aspects.

Differences between Iroquois and Pueblo Indians. (2016, Mar 01). Retrieved from https://studymoose.com/differences-between-iroquois-and-pueblo-indians-essay 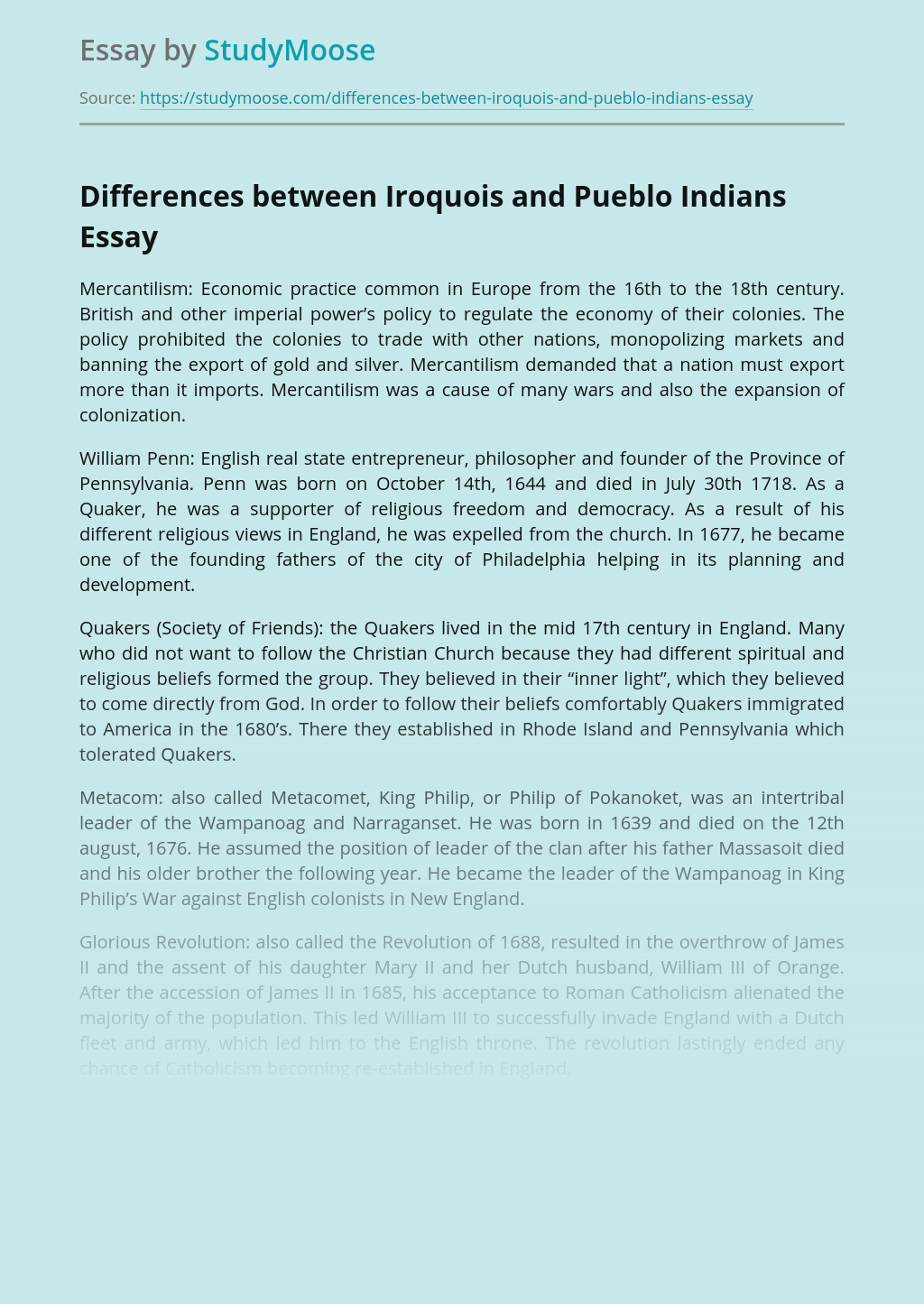