Difference of Coke and Pepsi Profitability

(a) Why has the soft drink industry been so profitable for concentrate producers? Compare the economics of the concentrate business to the bottling business: why is the profitability so different? [50% points]

The soft drink industry has been extremely profitable for Concentrate producers. When we study the 5 forces analysis, we come to a conclusion that almost all the forces have contributed significantly in this massive profit generating mechanism.

Don't use plagiarized sources. Get your custom essay on
“ Difference of Coke and Pepsi Profitability ”
Get custom paper
NEW! smart matching with writer

Threat of new entrants is low and there are multiple high barriers to entry. Despite the low cost of establishing a concentrate production plant, the producers have to develop exclusive relations with bottling plants and support them in marketing research, advertising and setting up distribution channels which is difficult for new entrants and require huge capital infusion.

Bargaining power of Buyers used to be negligible as concentrate producers used to make bottlers abide by fixed price contracts which made them operate on razor thin margins.

Threat of substitute product is suppose to be high since there are a variety of substitutes available which meet the end purpose of quenching the thirst and consumer being open to healthy or low calorie substitutes like tea, juice or energy drink. But the conventional concentrate producer has diversified its product portfolio to meet all demands and keep its consumer base loyal. Also strengthening distribution networks and creating advertisement campaign has led to consumer retention.(Exhibit 8) Competition is high since major brands competing are Coca cola and pepsi who compete at every level, from product range and bottling plants to retailer selection and advertisement. Both concentrate producers are have deep pockets to execute swift decisions and they have adopted similar strategies to gain market share and consolidate.

They have a staggering market presence controlling nearly 3/4th of the market and they have surgically acquired or contained all other competitors.(Exhibit 2) By the 5 force analysis, it is visible that the immense market experience and availability of funds had led concentrate producers to use almost all the forces in their advantage to maintain high profitability.

In contrast to the concentrate producer, the bottling plants operate on one-third of the profit margin percent, this can be explained by the contrasts in the economics using the 5 force analysis for bottling plants. Threat of new entrants was traditionally low since high capital requirement acts as as high barrier of entry but the threat from the concentrate producer entity emerging as a bottler is high ever since they have started vertical integrations by providing concentration at lower rates for better margins to self-owned entities.

Bargaining power of buyers is high since bottling plants have no unique value proposition and they compete with identical competitors for a vastly segmented market. They conduct extensive negotiations with different channels on stock, pricing and space. They develop complex price strategies for maintaining exclusive contracts with nation wide restaurant chains. They have to bid for higher presence among mass merchandisers and retail stores. They also have to provide low-margin fountains and vending machines services to sustain market presence. Threat of substitute is low among bottling plants since they have invested a huge capital on set-up, operational efficiency and R&D.

They have a established ground of operations which cannot be easily substituted and they enjoy massive support from concentrate producers in supplier contracts, marketing research and advertisements Bargaining power of suppliers is average where commodities like packaging material and sugar can be obtained easily while concentrate producers control prices due to high dependency on them.

But due to the reciprocity nature of dependency, concentrate producers extend advertising support, marketing surveys and strategic integration to loyal bottling plants to focus on volume and carry a wider range of products. The variation of business economics where bottling plants face price constraints, negotiations with every supplier at an individual level, cut-throat competition, high operating costs and an increasing threat of being acquired by the concentrate producer hits the profitability of the bottlers and gives a huge edge to the concentrate producers.

(b) How would you characterize the nature of the competition between Coke and Pepsi and how has it impacted the profits of the US carbonated soft drinks (CSD) industry as a whole? [20% points]

Coca-cola had maintained high profitability acting as a monopoly since its inception since it did not face any competition. When Pepsi entered the market as a prominent player, it struggled to gather market traction but after the “Blind taste test” it became a real competitor. The nature of competition has been fierce ranging from better positioning at a single store, to going beyond international borders. Although both the companies have adopted similar strategies, the timing and focus has led to significant success and more significant failures. Some major initiatives by Coca-Cola were developing infrastructure in European countries and Asia which paid heavy returns.

It was also a pioneer in introducing new flavors and brands(Exhibit 2) which sharply increased its market share and vertical integration by acquiring bottling plants for better margins(Exhibit 3a) which resulted in stellar financial performances. Pepsi on the other hand gained significant domestic US market when Coca-cola focussed internationally, it was first to get exclusive contracts with restaurant chains and introduce bigger family-size bottles. It also led diversification by transforming into a beverage and food giant by acquiring Frito-Lay, Gatorade and Lipton. Pepsi Bottling Group optimized its operations and maintains a higher % profit/sales over CCE till date(Exhibit 3b).

Both companies have also made big mistakes like Coca-cola introducing “New Coke” and Pepsi giving first-movers advantage to Coke in international markets. Also engaging in a bitter price wars saw their balance sheets in red(Exhibit 5). But they have also worked excellently in rectifying their mistakes like Coke diversifying by acquiring Minute-Maid and Vitamin water drinks. Since over half of Pepsi’s sales were domestic and Coke already had a lead in the International market, Pepsi focussed on markets still up-for-grabs like China, India, Africa and Middle-east. It has since gained significant market share in emerging economies after learning its lesson.

Recently, both the companies have undergone significant media bashing with environmental concerns of the PET bottle, health and obesity uproars and sugary content in CSDs, so they have realized the shift in market focus to non-CSDs and diet soft drinks(Exhibit 7). New strategies include more focus on these drinks and both companies are looking to leverage their existing market domination to gain a better market shares and higher profits since margins on these drinks are much higher than CSDs.

(c) Compare and contrast the structure and profitability of the emerging non-CSD industry with the key aspects of the traditional CSD industry structure that you covered in part (a). Can Coke and Pepsi repeat their success they had with CSDs in the non-CSDs industry, or will a new competitive landscape & dynamic emerge? [30% points]

In late 1990s the soft-drink industry showed signs of permanent shift as the demand for carbonated soft drinks began to fizzle out(Exhibit 7) due to the rising health concern with obesity, high sugar content and perceived risks of high-fructose corn syrup. Diet sodas had already caught a lot of attention and they were quickly replacing conventional sodas, Coke and Pepsi broadened their product range by offering more Diet and herbal drinks. Pepsi was more aggressive in this transformation by acquiring Gatorade and Lipton which outsold Coke products in these categories, Coke followed suit by acquiring EnergyBrands, its largest acquisition ever, but Pepsi maintained a commanding lead in non-carb segment.

Both companies also launched bottled water which is the largest sector in non-CSD market by volume(Exhibit 9) The structure and profitability in an emerging non-CSD industry has dynamics very different from the conventional CSD industry which has been played out and matured. The stark contrasts that the structure of this industry lies in the fact that this market is very young and entry of new products changes its dynamics rapidly. The threat of new entrants in this market is very high as concentrate production does not require a lot of investment and innovative products attract a lot of clientele which have led to a stronger position among competitors like Nestle, Unilever and DPS.

The bottling plants have strengthened their position in this sector as they have not led Coke and Pepsi influence this market completely. They have been reluctant in introducing non-CSD products as they have no brand loyalty and their existing infrastructure does not support new products. Setting up new infrastructure and pressure from concentrate producers to increase non-CSD turnovers require higher operation costs and lesser profit margins. Concentrate producers are building better relationships with independent bottlers to push non-CSD and alternate drinks since they have much higher margins than CSD(Exhibit 10), concentrate producers are willing to assist bottling plants and they started selling finished goods to bottlers.

They have also leveraged the company owned bottling plants by purchasing at lower prices and even marketing directly to retail chains to gain higher profit margin and gain market penetration It is most likely that Coke and Pepsi will repeat their success with this new industry like they did in CSDs for the first and foremost reason that these companies are financially very strong and they have the ability to acquire or contain an emerging competitor. Also they have invested and will continue to invest in understanding the market, so they have established a market trend analysis and they are prepared to tackle upcoming threats by taking the appropriate action.

That is the reason that Coke and Pepsi are directly competing with every new product launched in this category and gaining popularity like tea, water or energy drinks. Early diversification in products has strengthened their brand equity which they can leverage in gaining further control in the non-CSD market. Another reason that these companies are likely to succeed is because of vertically integrated network that they have established from manufacturing concentrate to marketing to retailers, they have exclusive contracts with bottling plants and they have spent decades perfecting the distribution network.

They can introduce new products in this chain with much more ease and effect rather than new players developing an entire new network. Lastly, since the market in US is moving faster towards non-CSDs than the rest of the world, Coke and Pepsi have gained experience in tackling this change and then they can apply it to the international markets and be the driving force in influencing emerging economies due to their vast strategic global presence.

Difference of Coke and Pepsi Profitability. (2017, Feb 15). Retrieved from https://studymoose.com/difference-of-coke-and-pepsi-profitability-essay 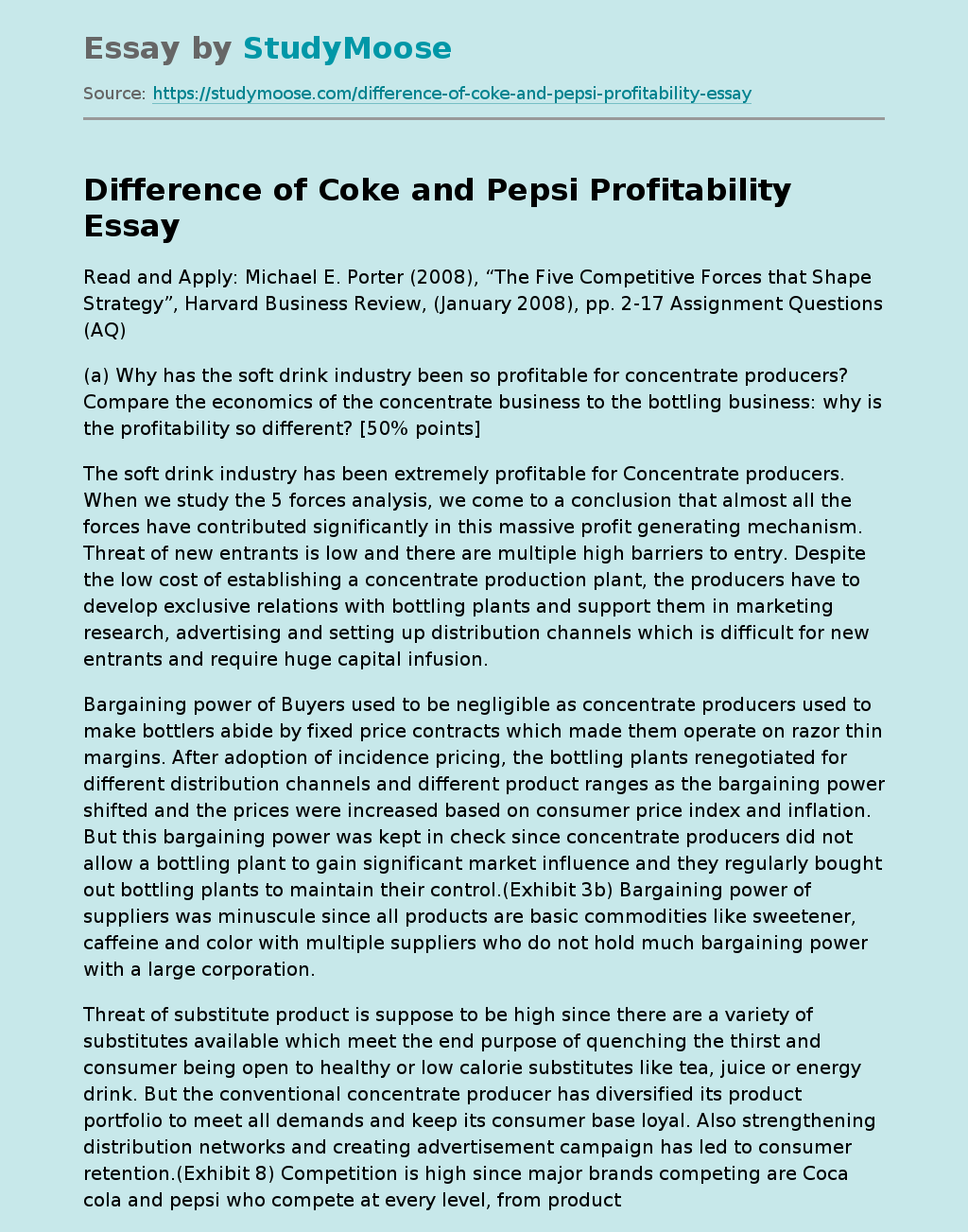